Sex weasels of classical portraiture. Times Square billboard under fire. Fanatics becomes the Amazon of sports apparel. The West Wing Weekly podcast looks at campaign design and typography. Using QR codes to assist dementia patients. Is there money in art? The tragedy of AirPods. All that and more in WhatTheyThink’s weekly miscellany.

A partnership between the Hong Kong Research Institute of Textiles and Apparel (HKRITA), the H&M Foundation, and Novetex Textiles Limited has resulted in the world’s first in-store and industrial garment-to-garment recycling facilities.

Sometimes you see a headline and click on it knowing full well that it will bear no resemblance to the actual story. And then sometimes you are surprised to learn that it was a perfectly accurate and descriptive headline. Armed with that intro, we give you, from Boing Boing, this headline: “The sex weasels of classical portraiture.”

In Renaissance art, the weasel was a common fertility symbol—although it bears mentioning that artists back then tended to have a fairly loose definition of “weasel,” considering many different kinds of mammals from the Mustelidaefamily as weasels. Think of your ermines, your sables, your ferrets, and your minks. “Weasels” were also depicted in paintings of pregnant women to symbolize the hope for a successful childbirth, were symbols of purity, and also as phallic symbols. Who’d have thought the lowly weasel would be freighted with such meaning? 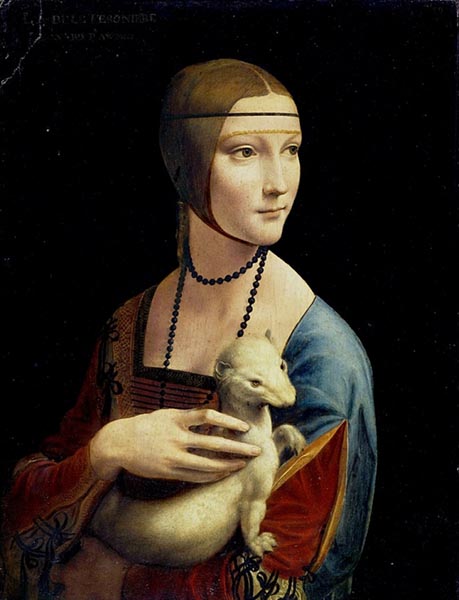 “Lady with an Ermine” (circa 1490) by Leonardo da Vinci. Collection of Czartoryski Museum, Krakow.

Check out the Museum of Ridiculously Interesting Thingsfor more.

Here’s another headline that lived up to its verbiage, this time from the New York Times: “‘Knitting Is Coding’ and Yarn Is Programmable in This Physics Lab.”

Some of the oldest examples date to the 11th century in Egypt. But despite generations of practical and experiential knowledge, the physical and mathematical properties of knitted fabric rarely are studied in a way that produces predictive models about how such fabrics behave.

Dr. Matsumoto argues that “knitting is coding” and that yarn is a programmable material. The potential dividends of her research range from wearable electronics to tissue scaffolding.

Hopefully Not the Poop One

Think of it as “never say die” signage: Via Gizmodo, a report about a Times Square electronic billboard that, last weekend, burst into flames. Even as it rained debris onto the street below, the billboard continued to doggedly display the ads it was programmed to display—for data collection (a perfect metaphor for our age, perhaps) and Skyy vodka. We’ll drink to that.

Comcast is reportedly developing a smart speaker that would track your bathroom habits https://t.co/XymUo6AgSB pic.twitter.com/mzdBtwKLUB

Fanatics is a sports apparel manufacturer that has embraced the microfactory-based approach to fast fashion, and has, per Axios, become something like the Amazon of sports apparel.

Similar to fast-fashion retailers like H&M, Fanatics controls the entire value chain (manufacturing, point-of-sale, distribution, etc.), making the company incredibly nimble. It also has licensing deals with all four major sports leagues, MLS, NASCAR, the PGA and over 500 colleges that give it the exclusive right to print jerseys made for order.

Result: There's no need to stockpile inventory, zero chance Fanatics runs out of stock and, most importantly, the company is always prepared for unexpected surges in demand. When Odell Beckham Jr. was traded to the Cleveland Browns, for instance, Fanatics was ready to ship jerseys within seconds.

Prime example: After the Washington Capitals won last year's Stanley Cup, Fanatics produced the gear the team wore as they celebrated, stocked the store in the Capitals' arena, stocked the NHL's official online store and ran its own retail sites. Again, this is happening in every major sport.

Some of us here in the WhatTheyThink Around the Web research bunker have long been big fans of the TV show The West Wing (as well as the rest of the Aaron Sorkin oeuvre). A few years ago, a podcast was launched, called The West Wing Weekly, that provided an episode-by-episode rewatch of the series hosted by mega-fan Hrishikesh Hirway (who is also creator and former host of the brilliant, award-winning podcast Song Exploder) and West Wing series regular Joshua Malina (Will Bailey). The podcast is currently heading toward the end of season 6 of the show, and the podcast has evolved into not just a discussion of a TV program about a fictional Administration (with guests that include West Wing writers, actors, directors, and even series creator Aaron Sorkin himself), but as a podcast that takes a deeper dive into some of the real-world issues that the show brought up and which are still relevant today, with incisive interviews with policy experts and others actively involved in those issues.

This week’s episode of the podcast looks at the graphic design of Presidential campaigns, with guests Michael Bierut of Pentagram who designed Hillary Clinton’s “H” logo, and Leslie Wah, who was the staff designer on The West Wing and designed all the campaign graphics and logos for the show’s Presidential candidates during the sixth and seventh seasons. The discussion is a fascinating look at the evolution of campaign graphics and typography and is worth checking out even if you have never watched The West Wing.

Any steel used in Geiger counters must be from before 1945 so that it isn't contaminated with radiation from nuclear weapons. One of the primary sources for such steel is sunken ships from World War 2.

Over the years, there have been many different uses for Quick Response (QR) codes, but there is one that may be the most potentially useful application of scannable barcodes: protecting dementia patients. From the BBC:

in Japan, people like Mrs Itou are using new practical solutions to deal with memory loss and the need for a constant vigil.

The QR codes pattern are attached to badges and can be read by a smartphone.

The local government provides people with dementia and their carers, with badges they can wear. They display a QR code - a square image similar to a barcode - which can be read by anyone with a smart-phone.

The badges have helped Mrs Itou get home the last two times she went missing.

One of the inventors of the badges, Haruo Hidaka had the idea after watching the grandmother who raised him suffer with dementia.

He believed in the idea so much that his team developed a prototype that he personally went to sell in 630 towns and cities across Japan.

The idea was a success and the company he worked for has been bought by the Japanese pharmaceutical company Toho Holdings.

Ever dreamed of hitting it big in the art world? Ever fantasized about buying a “starving artist” painting and hoping it will someday be worth millions?

Well, there’s not going to be a rush on Holiday Inn room décor any time soon. Via Barry Ritholtz (who sounds uncannily like our Dr. Joe Webb at one point), commenting on a recent sale of a Monet painting at auction for $110.7 million and a Jeff Koons sculpture for $91 million:

Before you look at these gains and assume that investing in art seems like a sure thing, some cautionary words are in order. The problem with this is that investors tend to notice the big winners, while ignoring the works of art (or other assets) that fail to appreciate in value. Statistically, the vast majority of investments have returns that are nothing like this; some even lose value.

This tendency to give too much weight to the big winners while excluding the losers — otherwise known as survivorship bias — has a long and storied history in investing. Mutual funds were the first great example of this: Funds tend to regularly close down and disappear due to poor performance. The Vanguard Group and Dimensional Funds Advisors each separately found that about half of funds close within 15 years. When the losers get killed off, it makes the average performance of the survivors look that much better.

Author and investment adviser William J. Bernstein points out that much of the appreciation in art and other collectibles is really just a lesson in the magic of compounding. One painting by one of the Old Masters bought from the artist for the equivalent of $100 and sold 350 years later for hundreds of millions of dollars returned just 3.3 percent annually, he calculated. “If you save and you have even a modest rate of return over hundreds of years, then you’ll have a fabulous amount of money” he said on our Masters in Business podcast.

Selecting appreciated investments after the fact is easy. Instead, consider this challenge: What work of art are you willing to buy and hold for sale in 2052? That question reveals just how difficult investing in collectible assets really is.

The Tragedy of AirPods

Vice’s Future Relics column is not impressed with AirPods:

It now seems that they have become a Millennial status symbol, for some reason.

1983: First publications of the discovery of the HIV virus that causes AIDS in the journal Science by Luc Montagnier.

1985: Radio Martí, part of the Voice of America service, begins broadcasting to Cuba.

1703: Daniel Defoe is imprisoned on charges of seditious libel.

1932: Bad weather forces Amelia Earhart to land in a pasture in Derry, Northern Ireland, and she thereby becomes the first woman to fly solo across the Atlantic Ocean.

1981: Transamerica Corporation agrees to sell United Artists to Metro-Goldwyn-Mayer for $380 million after the box office failure of the 1980 film Heaven's Gate.

1804: The Lewis and Clark Expedition officially begins as the Corps of Discovery departs from St. Charles, Mo.

1900: The Associated Press is formed in New York City as a non-profit news cooperative.

1995: The first version of the Java programming language is released.

1683: The Ashmolean Museum in Oxford, England, opens as the world’s first university museum.

1830: “Mary Had a Little Lamb” by Sarah Josepha Hale is published.

1844: Samuel Morse sends the message “What hath God wrought” (a biblical quotation, Numbers 23:23) from a committee room in the United States Capitol to his assistant, Alfred Vail, in Baltimore, Md,, to inaugurate a commercial telegraph line between Baltimore and Washington D.C.

1956: The first Eurovision Song Contest is held in Lugano, Switzerland.