OnPoint named Alabama Manufacturer of the Year. New dress shirts. The origin of the word “dude.” A dark vision of the future of advertising. Will we ever be able to see more colors? The long lost Marx Brothers movie written by Salvador Dalí. Selling whisky with parrots. All that and more in WhatTheyThink’s weekly miscellany.

Commuter Dress Shirt blurs the boundary between business attire and athleisure wear. From The Daily Beast: “With the look of a dress shirt, this wrinkle-free button-down is comprised of lightweight Italian fabric, wicks away moisture, hides its button collars, and stretches four ways.” And it's only $118.  [“Athleisure”? —Ed.]

Here at WhatTheyThink, we are no strangers to typos, but then we’re not legal currency. Unlike the Reserve Bank of Australia, which produces that country’s legal tender, which had an embarrassing typo in the micro-text on the new $50 notes.

The note features the Indigenous writer and inventor David Unaipon on one side, and Edith Cowan, Australia’s first female member of parliament, on the other – as it has since 1995.

The small error occurred on Cowan’s side, in the text of her speech.

It is a great responsibilty [sic] to be the only woman here, and I want to emphasise the necessity which exists for other women being here,” it says.

On Thursday, an RBA spokeswoman said the bank was “aware of it and the spelling will be corrected at the next print run”.

Word origins are inevitably fascinating, and over at the BBC, the surprising origins of a handful of words, such as silhouette, picturesque, and dude.

It’s thought that ‘dude’ is an abbreviation of ‘Doodle’ in ‘Yankee Doodle’, and probably refers to the new-fangled ‘dandy’ that the song describes. Originally sung in the late 18th Century by British soldiers keen to lampoon the American colonists with whom they were at war, the ditty, by the end of the 19th Century, had been embraced in the US as a patriotic anthem.

By then, an indigenous species of fastidiously over-styled popinjays had emerged in America to rival the British dandy, and it is to this new breed of primly dressed aesthetes that the term ‘dude’ was attached. Over time, the silk cravats and tapered trousers, varnished shoes and stripy vests worn by such proponents of the trend as Evander Berry Wall (the New York City socialite who was dubbed ‘King of the Dudes’) would be stripped away, leaving little more than a countercultural attitude to define what it means to be a Dude (or an El Duderino, if you’re not into the whole brevity thing).

Over at OneZero, “A Vision of the Dark Future of Advertising”—essentially, the result of the Internet of Things and all the interconnected devices we willingly allow to access our personal lives.

As the cost of adding computer chips to objects falls, our baby monitors, coffee machines, Fitbits, energy meters, clothes, books, fridges, and facial expressions will all create data points. So will our public spaces, lampposts, storefronts, and traffic lights. A 70-year-old in 2069 will have had most of her life datafied.

Far more of this profiling will be inferred, meaning automated systems will generate insights about people based on their behavior and not because they’ve explicitly stated a preference. Good examples of this in practice today are the psychographic techniques used by Cambridge Analytica. The group calculated personality types based on surveys and cross-referenced the results against Facebook likes to build a predictive personality model based on likes alone. Despite all the outrage, there’s little evidence this actually worked. But at some point, it will.

The end result will be ad targeting so effective that you may well question the notion of free will altogether. Via complex analysis that no one will understand, taking in data from your fridge, smart car, work calendar, facial expressions, and toilet, your smart TV will fire off a personalized ad about buying that shiny new handgun just at the moment you’re starting to feel… well, in fact, you won’t know what the reason is. It won’t matter, either.

The Vatican has nominated St Isidore, who tried to record every known piece of information, to be the patron saint of the Internet.

Gizmodo has an interesting thought experiment based on the—we think—dubious assumption that we’ll all have brain chips implanted to do...well, things. Anyway, this raises many questions, not the least of which would be, “will we be able to see new colors?” In other words, “Is there any way—technological or otherwise—that we might, sometime in the future, escape the ROYGBIV paradigm?”

A variety of perspectives are offered—mostly variants of “no”—but Susan Fernand at RIT says:

The answer is, in all likelihood, no. Color is a perception. We can expand the wavelength range of the radiation that we can detect. Night vision goggles, for example, allow us to detect near infrared radiation, but do not provide a new color. To generate a new color, we would have to modify the way our brains interpret the detected radiation. Given the complexities of the visual system, the chance of success is quite low and the risk of permanent damage is extremely high. This kind of rewiring of the brain for the sake of seeing a new color seems prohibitive.

It’s entirely possible that Pantone is working on this as we speak.

Quote of the Week

Customs officers do not like it when you try to bring a duffel bag full of 40 vacuum-sealed, frozen piranhas into Los Angeles.

A robot inspired by vines can grow 25,000 times its original size pic.twitter.com/w0fA3Ng0fp

For those of us who are fans of both Spanish surrealist painter Salvador Dalí and the anarchic comedy team the Marx Brothers, Giraffes on Horseback Salad, a joint project between the two, is perhaps one of the greatest movies never made. The screenplay was written in 1937 by Dalí and Harpo Marx (they were friends, and it makes perfect sense that they would be) but was axed by studio head Louis B Mayer. Even Groucho Marx said of the script, “It won’t play.”

Maybe not as a movie, but now the screenplay has been converted into a graphic novel by Texas writer Josh Frank, after a not inconsiderable amount of detective work to uncover fragments of a screenplay that, for a time, was considered more mythical than filmable. The Guardian has the story.

The central theme of the film, Dalí wrote, would have been “the continuous struggle between the imaginative life as depicted in the old myths and the practical and rational life of contemporary society.” Frank carefully created a screenplay from the artist’s notes: a love story between a Spanish aristocrat named Jimmy and a “beautiful surrealist woman, whose face is never seen by the audience”.

His proposal for a graphic novel was welcomed by the Dalí and Marx estates, so Frank approached a young Spanish artist, Manuela Pertega, to illustrate it. “I knew I need an illustrator who understood Dalí. Manuela was excited because she grew up near where he was born.”

At points in the screenplay Dalí had simply written “insert Marx Bros routine”, so to provide suitable comic antics Frank went to American comedian Tim Heidecker: “I ended up working with him in a writers’ room in Burbank and filling in all those moments in the script. It was great.” 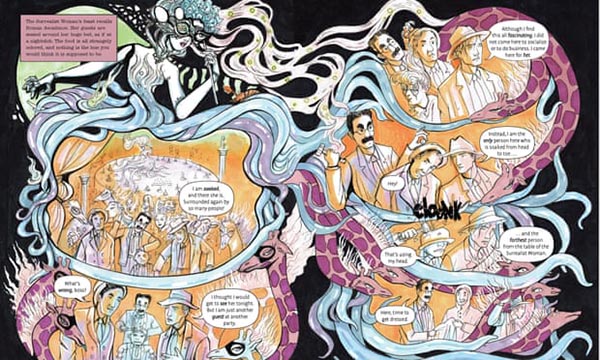 Check it out here.

What Could Possibly Go Wrong? Pt. 2

A team of computer scientists from Stanford University has created a pun generator and is working on building AI that would be naturally funny. The team is led by a scientist named He He. (Study: https://t.co/4jYlElFxyF.)

Ten years ago, San Francisco Bay Area Postmaster/artist Lea Redmond launched The World’s Smallest Post Service as a way for people to send and mail custom tiny letters and packages to friends and loved ones via what was essentially an online transcription service. Now, Redmond is trying to set up a bricks-and-mortar World’s Smallest Post Office in Oakland via a Kickstarter. No donation is too small!

Various WhatTheyThink contributors over the years have written at length about changes in advertising and marketing media channels. One particular marketing medium didn’t make it out of the 19th century, and maybe that’s a good thing. We are speaking of course about the parrot.

In 1887, brothers Robert and Walter Pattison began manufacturing and marketing their own brand of Scotch whisky. By all accounts, they were a flamboyant pair, but they eagerly exploited various novel kinds of marketing ploys.

They used the medium of advertising with great skill and verve, tapping into the prevailing public pride in the British Empire and its military might. During 1897, the Pattisons reputedly spent the vast sum of £20,000 on advertising, and three times that the following year.

Probably their best-known ploy was to have 500 African Grey parrots trained to repeat phrases such as ‘Buy Pattisons’ Whisky!’, before giving the birds away to publicans all over the country.

Unfortunately, the company was out of business by the end of the century and the brothers were tried and convicted for fraud. Presumably the parrots lived long and healthy—if perhaps inebriated—lives.

This piece of marketing history was brought to our attention via a recent episode of The Unbelievable Truth, the BBC Radio 4 comedy panel game.

We also learned in this episode that there is an American death metal band called Hatebeak whose lead “singer” is Waldo, a gray parrot. Their albums include Bird Seeds of Vengeance and The Number of the Beak. The band does not tour so as not to “torture the bird”—or audiences, we assume. The are said to be the only band to have an avian singer. (Actually we prefer Andrew Bird.) 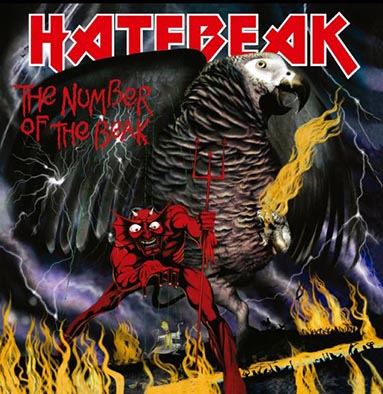 Hmmm...and not a squawk out of Iron Maiden’s lawyers...

1536: King Henry VIII orders English-language Bibles be placed in every church. In 1539 the Great Bible would be provided for this purpose.

A very happy 93rd birthday to Sir #DavidAttenborough! ??
As good a day as any to remember when he was upstaged by a bird... ????pic.twitter.com/VOuK5LqjGO

1980: The World Health Organization confirms the eradication of smallpox. (Well, for now, anyway...)