Around the Web: Behind the Seams. Threading the Needle. Imaging the Unimagable. A Good Week for Type. Wikienigma. I, Author. Scamming the Scammer.

The current state of the US textile industry. Ironic commemorative stamps. Making a giant paper dragon. Photographing a black hole. A font of typography news. An encyclopedia of unknowns. Robot-penned books. A screenwriter toys with a Facebook Messenger scammer. All that and more in WhatTheyThink’s weekly miscellany.

The Textile Industry: Behind the Seams

NCTO is a Washington, DC-based trade association that represents domestic textile manufacturers. It's Chairman, Marty Moran, recently reported on the current state of the textiles industry in the U.S.:

Researchers at Rochester Institute of Technology have developed a smart toilet seat that can monitor the symptoms of congestive heart failure while you're on the loo.

Thread is so often overlooked! It's a key element of knit/sew/embroidery, and until recently, there has been little real innovation and a huge amount of waste in the thread supply chain. That's now changing with things like dyeing thread on demand and embedding graphene in thread/yarns to create technical materials with many benefits. Kudos to Coats for planning to open three Innovation Centers dedicated to thread!

Hey, #historiansontwitter -
This is one of my favorite USPS things ever.
The Repeal Of The Stamp Act commemorative...stamps. pic.twitter.com/WPvRAXAafg

Throne for a Loss

Even if you’re not a Game of Thrones fan, who wouldn’t want to have a giant paper dragon in their home or office? Watch one get made here.

Touts les Nets were a-Twitter this week (and rightfully so) over the first-ever photograph of a black hole. 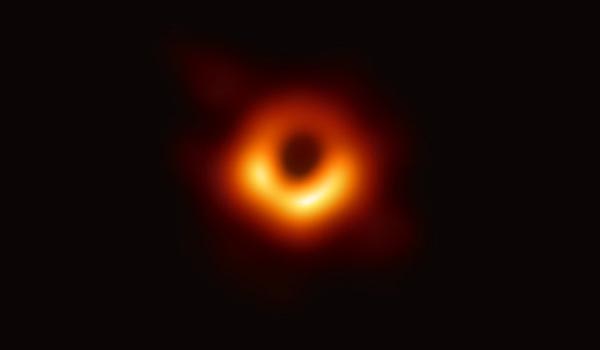 Capturing a black hole’s visage requires far more than just a point-and-shoot approach. The worldwide team of researchers, comprising 200 people from some 20 countries, constructed the black hole’s image using a technique called very long baseline interferometry (VLBI). VLBI combines the data from multiple radio telescopes scattered across the globe to create a virtual, Earth-sized dish, with a resolution equivalent to being able to read the date on a quarter in Los Angeles seen from D.C., Doeleman said.

Think of the old joke about a bunch of blindfolded scientists studying different parts of an elephant — one finds an ear, another the tail, and so forth. With VLBI, each blindfolded scientist represents the distance, or baseline, between two telescopes. But instead of sampling different body parts, each baseline observes a different scale of the elephant: One says it’s 10 feet high; another says there’s an ear here of such-and-such size; still another explores the fine texture of the elephant’s skin. As Earth turns, the baselines change, detecting different scales of the elephant. The scientists then piece these bits of information together into a coherent image.

Here is the image of the black hole in M87, and at the press conference the Event Horizon team just said it is precisely as predicted by General Relativity. Einstein right again - wouldn’t he have loved to see this! https://t.co/VzkTLWC58D

The development of the software that created that first-ever image of a black hole was led by 29-year-old computer scientist Katie Bouman, who began making the algorithm three years ago while she was a graduate student at MIT.

Some Type of Week

There was a greater than usual amount of typography news this week. We begin in India, where Mumbaikers are striving to preserve the city’s architectural heritage. “And,” says The Guardian, “rising in the margins of this surge is a slow revival of interest in fading forms of typography and signage as a key part to the city’s history.”

Wistful accounts such as Aditi Khandelwal’s Bombay Type Project record all manner of old Mumbai typography. @Artdecomumbai’s account of genteel Bombay buildings is liberally sprinkled with photographs of art deco signs (including the delightful Rivendell House), while photographer and chronicler of the city Gopal MS (@Mumbaipaused) has been charting #oldbombaytype since 2013. And Typography Day, organised by the IDC School of Design at the Indian Institute of Technology Bombay, has been talking about type, both old and new, since 2008.

One of those taking up cudgels on behalf of this history is type designer and typographer Tanya George, who takes enthusiasts on typography-spotting walks through the time-weary streets of Fort, once the beating heart of business and commerce in old Bombay. George points out moribund signs lying dog-eared with neglect, others eroded into ghost signs, and jarring, charmless modern signboards.

Much of Mumbai’s signage and other display graphics are still hand-painted and -constructed, such as this subway sign: 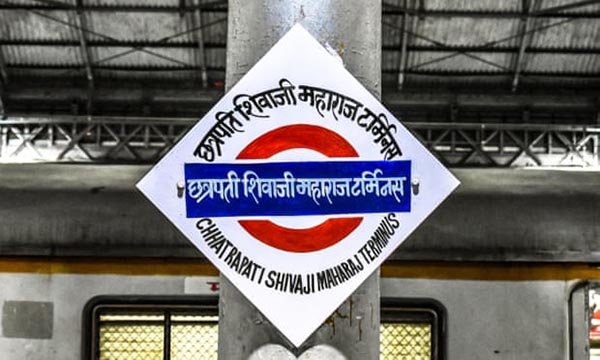 Meanwhile, here in the US, the United States Web Design System has developed a free/open font called Public Sans, billed as “A strong, neutral typeface for text or display.” 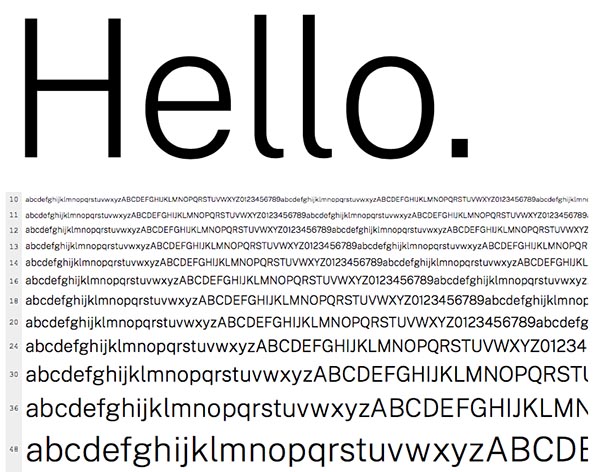 But if you’re a traditionalist, there’s no tradition like a new tradition: Helvetica Now (perhaps to be shouted à la Frank Constanza’s “Serenity now!”), designed by Max Miedinger, Charles Nix, and Jan Hendrik Weber, et al., for Monotype, is the first revision of the classic typeface in 35 years. 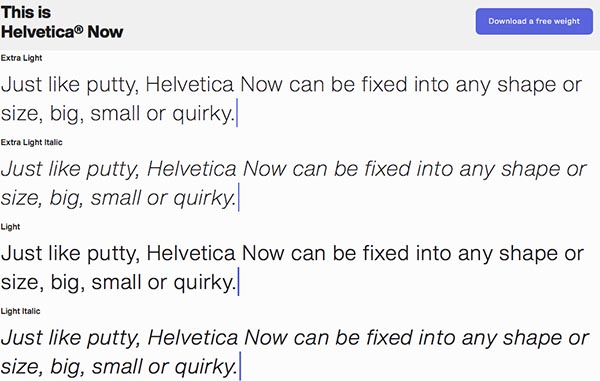 Finally, over at Vox, a look at how au courant brands like Chobani and Glossier are reviving 1970s-style typefaces—even Frank Romano’s old nemesis, Souvenir (“the Comic Sans of the 1970s”).

Branding trends always exist in relation to what came immediately before; aesthetics are a powerful way for a company to stand out from its competitors, and once a particular look reaches oversaturation, it’s time to move on. Particularly in the startup space, the early 2010s were absolutely dominated by sans serifs and minimalist design, a trend that was itself a reaction to the chaotic typography of the 1990s. Now that the simple, utilitarian look has run its course, companies and branding agencies are turning to fonts with a more expressive, human feel.

Many of the typefaces that we associate with the ’60s and ’70s were actually created decades before, though they’re informing the present-day design landscape because of how they were used in the ’70s. Consider the typeface Windsor, which was crafted in 1905 and, according to the Font Review Journal, had its heyday between the 1960s and ’80s. It was famously used on the cover of the counterculture magazine the Whole Earth Catalog and in Woody Allen’s film titles, including 1977’s Annie Hall. Cooper Black was released in 1922, but in the ’60s and ’70s it made notable appearances on album covers from The Doors, Curtis Mayfield, and The Beatles.

OK. We had this discussion on Valentine’s Day. This is now almost Easter and there is no excuse for this. pic.twitter.com/Diu1yH9LhI

“There Are Known Unknowns...”

Tired of that know-it-all Wikipedia having all the occasionally accurate answers to life’s questions? Check out Wikenigma, an “encyclopedia of unknowns.” Wha?

To pick one, er, random example, random numbers: “We can never decide for sure that a number is random, but what we can do is apply an increasing number of tests and treat our sequence of numbers as innocent until proved guilty.”

Another example is the entry on catnip: “Although many of the active-ingredient chemicals (e.g. Nepetalactone) have been identified and isolated, no-one has any idea why they affect felids in the ways they do.”

Be sure to consult it often when you don’t want answers to specific questions. Kind of like Wikipedia, in a way...

When the Old Music’s Over

Here’s a bit of clickbait from the BBC: “Old music tech people under 30 wouldn’t understand.” Cassette head cleaners? 8-track tapes? The Walkman? Yeah, kind of a cute, nostalgic roundup for those of us who had these items back in the day. But then 30 years ago you could identify music (or any) technologies that people who were under 30 back then wouldn’t understand (wax cylinders? 78s? phonautograms?). So it goes.

Authoring by the Book

Uh oh: machine-authored books are nothing really new, especially if you’re a James Patterson fan (kidding...), and many auto-generated ebooks are available on Amazon. And while they are generally unreadable, Springer Nature has published the first “autobook” that was written using an algorithm using machine learning. Says Gizmodo:

The algorithm, which was developed by AI researchers at the Applied Computational Linguistics (ACoLi) lab at Goethe University in Frankfurt, Germany, was not designed to replace authors like John Grisham or J. K. Rowling. As is probably evident by its title, Lithium-Ion Batteries: A Machine-Generated Summary of Current Research (which can be freely downloaded here) doesn’t feature interesting characters, snappy dialogue, or a thrilling plot. As far as we know, Hollywood studios have no plans to option it as next summer’s blockbuster. Instead, it’s an attempt to distill and condense the extensive research being done on lithium-ion batteries.

Fortunately, such machine-authoring has yet to some to trade publishing.

Give how many robocalls, spam, and outright scammy messages we get across all media, this could be the great new pastime of the 21s century: having fun with scammers. (Some of us used to similarly twit telemarketers back in the day.) From The New Yorker:

Recently, the screenwriter Ed Solomon (“Men in Black,” “Bill & Ted’s Excellent Adventure,” and the upcoming “Bill & Ted Face the Music,” among others) received a Facebook message from the account of a friend. He quickly realized that the friend’s account had been hacked by a scammer, but he decided, out of curiosity, to keep the exchange with the scammer going. What follows is the actual transcript of their conversation. (The friend’s name has been changed.)

It’s worth clicking through and reading...and that’s not a scam!

Finally, for your weekend entertainment, over at Boing Boing, an “amateur” production of The Lion King featuring regular cats.

1870: The New York City Metropolitan Museum of Art is founded.

1923: Would you believe...American actor and director Don Adams born.

1828: Noah Webster copyrights the first edition of his dictionary.

1939: The Grapes of Wrath, by American author John Steinbeck is first published by the Viking Press.