Xeikon in Packaging: Ramping Up, Branching Out

The 2019 Xeikon Café event, which took place in late March, attracted 1,000+ visitors from about 250 companies. This article provides a brief overview of Xeikon’s recent progress while also discussing the effects of its annual event.

Prefaced with a “Pre-Labelexpo” press conference, the Café itself had two wider messages:

In fairness, Xeikon has long included package printing as part of its focus, having placed its first EP label webs for “roll-to-sheet” folding carton printing in 2010. Label printing has remained Xeikon’s top application in its “label and packaging” business (Xeikon’s other focus is commercial print/graphic arts) since that time, but carton printing now has a separate business unit within it. This unit, which includes dedicated sales and marketing teams, is assisted by partners for media and finishing as well as Xeikon’s own printers—particularly the Xeikon 3500, a 516mm/20.5-in. web device that prints B2-sized images. Meanwhile, Xeikon has even spread its paperboard printing from cartons into paper cup printing, enlisting sources for media (Kotkamills) and off-line die-cutting. Flint, which has maintained ownership of Xeikon since 2016, is also a factor; Xeikon’s parent is a $2.9 billion producer of inks, plates, and other supplies for analog printing and packaging converting. In time, Flint hopes that Xeikon will lead the combined companies in digital printing for packaging in general.

On the label side, Xeikon Café’s “Pre-Labelexpo” focus explored what could be expected at the upcoming September 2019 Labelexpo event in Brussels. That joint Xeikon/Flint booth will include EP and inkjet presses, thermal plate imagers, and a range of digital and analog printing supplies. The company’s EP presses now range from an entry-level “all-in-one” (Xeikon 3030 web, plus a finisher called “entryDCoat330”) to the Xeikon CX3 (330mm/13-in.) and Xeikon CX500 (500mm/20.5-in.), Xeikon’s fastest five-color EP label webs (30 mpm/98 fpm). On the inkjet side, the company will be showcasing its PX3000 and PX2000 UV inkjet webs (2017), which are built to Xeikon’s specifications and driven by the Xeikon X-800 digital front end (DFE),the same DFE that drives Xeikon’s dry toner presses.

Software will also be a key part of the story around Xeikon’s label presses. First seen at the 2018 Labelexpo Americas event in Chicago, “Xeikon Performance Services” is a software toolset that collects data from Xeikon webs and other equipment and yields insights about print efficiencies, to cut costs and enhance workflow. At the same time, Xeikon partners like CERM, Esko, LabelTraxx, and Hybrid software were exhibiting at the Café to offer their own tools to Xeikon users. 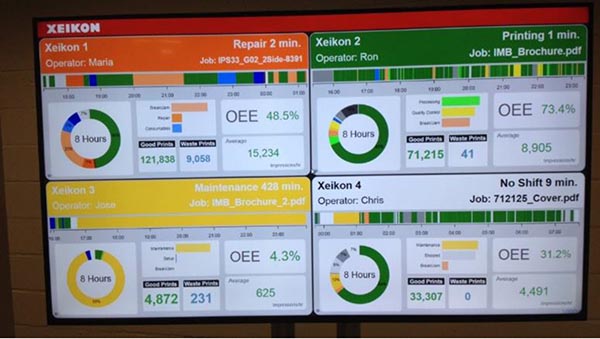 Xeikon Café also had lots of demonstrations of EP and inkjet in more rarefied digital label types, such as in-mold labels, heat-transfer labels, cut-and-stack labels, and paper cups (as mentioned earlier). Most striking, though, are two packaging applications where Xeikon is a new or prospective vendor, namely flexible packaging and corrugated. In flexible packaging, one of Xeikon’s biggest clients, CS Labels (UK), has led the way by printing and laminating films on Xeikon 3000 series EP presses for at least two years. CS Labels has subsequently landed a range of brand customers, primarily for food products. The company currently reverse-prints on a thermal laminate to form the package’s top layer, then adds one or more other layers with dry lamination. Xeikon endorsed the approach at its Café event and then announced that it will begin marketing its own EP presses for the pouch application. According to Xeikon, its dry toners are always food-safe and its dry toner process will be competitive with flexo for runs up to 4,000 meters.

Although Xeikon had no corrugated printer to introduce at its Café event, the company provided strong hints that something would likely be announced during drupa 2020. At the Café, Xeikon’s management confirmed that they have been investigating corrugated printing as well as the needs and habits of corrugated converters. In his overview, Xeikon CEO Benoit Chatelard noted that digital for corrugated is a focus. Chatelard went on to say that Flint, Xeikon’s parent company, is currently the largest supplier of inks to corrugated converters, with hundreds of analog converter customers worldwide. In possibly related news, Xeikon disclosed that its drupa booth will be double the size of any of its previous ones—large enough for lots of new products.

Ink products, which for the purposes of this discussion include both inkjet inks as well as dry toners, are core annuities for Xeikon and its competitors. With over 500 EP label presses and about 200 mainly Jetrion inkjet webs (Xeikon took over the Jetrion base from EFI in 2017), Xeikon’s operating presses are the second-largest installed base of production digital label printers and the only big one based on both EP and inkjet. Ink notes from Xeikon Café are as follows:

Xeikon’s inkjet research group, which includes several chemists, has developed the company’s inkjet inks, which for now are made by a third party. At the same time, it should be noted that parent company Flint is an ink giant, one that in the long term could manufacture inkjet inks. Apart from inkjet, though, Xeikon has been manufacturing dry toners for decades. The QB line, a new generation of toners that was introduced in 2018, includes new versions that the company says address all expected changes in food regulations.

At its March Café event, Xeikon looked more prosperous and all-encompassing than ever before. The company claims that its revenues grew by 15% between 2017 and 2018, and, meanwhile, its announcements during Café provide show the company is trying new things and even embracing entirely new applications. If you missed the recent event in Lier, another rendition of it will take place in Chicago from May 14 to 16. Xeikon also intends to host at least one more similar event at a later date.

Bob Leahey has many years of experience in consulting to the peripherals and supplies industries. At Keypoint Intelligence – InfoTrends, his main work has been to conduct custom research projects, most often on inkjet, thermal, and color laser technologies used for commercial and industrial applications. He is also the main analyst for InfoTrends’ Color Digital Label and Packaging (CDLP) continuous information service. His clients have included a wide range of printer and supplies manufacturers, and other companies, in all regions.