“The craft, precision, and unexpected beauty of the newspaper printing process.” Rebirth of a paper mill. Keyless in New York. The 14th-Century Mappa Mundi. “Alien”: The Play. Garfield phones storm the beaches. All that and more in WhatTheyThink’s weekly miscellany.

“The Beauty of the Newspaper Printing Process”

Also in the Times, a Midwest paper mill’s renaissance. “‘No one is shocked when a paper mill closes anymore,’ said Kyle Putzstuck, the president of Midwest Paper Group, which bought the Combined Locks mill soon after it was shuttered. ‘The shocking thing is when one reopens.’”

All thanks to ecommerce.

Semantic satiation is a psychological phenomenon in which repetition causes a word or phrase to temporarily lose meaning for the listener.

Over at the Gothamist, New Yorkers’ war on a “hideous” LED billboard boat:

The controversial barge was first spotted in the city's rivers in October, and has since attracted plenty of scorn from New Yorkers partial to a waterfront view that does not include an aggressively bright, 60-foot screen blaring ads for beer and private helicopter rides. After the Mayor's Office deemed it "hideous" earlier this year, the Law Department sent a letter to the company behind the boat, Ballyhoo Media, giving them a two-week deadline to demonstrate compliance with a local zoning resolution that prohibits advertising on local waterways.

But more than two months later, the ad-boat is still making frequent voyages around Manhattan, and it's unclear whether any official enforcement action has been taken.

If you were trying to commute in Atlanta one morning last week, you may have had to endure a few delays—because a tractor-trailer containing 5,500 gallons of printer ink overturned on I-285.

We told you it would leave a mark! Here’s what it looks like when a big rig crashes & dumps 40k lbs of printer ink! I-285/sb before MLK Jr Dr. @wsbradio #skycopter @wsbtv #captncam pic.twitter.com/bdzhWc1XcS

This is not how we would recommend you print asphalt graphics. But then at least it wasn’t toner.

The KeysApp to the Kingdom

The New York Times raises an interesting question in this looming age of the Internet of Things and mobile door key apps: do apartment renters have the right to a physical key?

A lawsuit filed in October in Housing Court in Manhattan by the couple and three other tenants of the West 45th Street building demands that the landlord give them access to all the entryways without having to use a keyless entry system.

But it also has opened a wider debate over privacy, ageism and renter’s rights that has inspired new legislation in Albany.

At the heart of the dispute is a keyless entry system designed by the company Latch that has been installed in more than 1,000 buildings across the city.

Founded in 2013, the New York-based company saw a need for tenants and landlords to share access with guests, such as visiting family members, the electrician or a delivery person.

Users download the app, create a profile and can unlock doors via their phone or a key card or by punching in a code on the device’s numeric keypad. In some cases, the mechanism is compatible with an ordinary metal key.

Unlocking your €100,000 car is now easier than ever pic.twitter.com/3hSs9pswoO

The CVS receipt has been deservedly well-mocked for its often absurd length, but as long as some CVS receipts are, they aren’t infinitely long. Right? Well, over at Boing Boing, Garrett Armstrong has developed a simple CVS Receipt Generator that can actually generate an infinitely long CVS receipt.

Don’t give them any ideas!

Over at the BBC, take a tour around the Mappa Mundi, one of the oldest, largest, and most curious medieval maps in the world. Drawn circa A.D. 1300, it is a meticulously detailed 1.59 by 1.34 meter-wide map depicting the history, geography, and religious understanding of the then-known world. It features more than 500 ink drawings on a single sheet of calf skin, and “offers a fascinating glimpse into the mindset of the ancient Christian world.”

Over at Venture Beat, some advice on why businesses should “rebuild” themselves as often as possible.

Rebuilding isn’t an option; it’s the only way forward. It’s how we adapt to market conditions, client requirements, and employee needs. A rebuilding mentality drives forward-thinking practices and ultimately ensures that we stay not just relevant but ahead of the curve.

Are there five rules for doing this? Of course there are! (Aren’t there always?) Click through to find out what they are.

The Play’s the (Alien) Thing

A North Bergen, N.J., high school production of “Alien: The Play”—yes, based on the movie—has gone viral:

The 1979 sci-fi film was adapted into a stage production, “Alien: The Play,” by drama students and teachers at North Bergen High School. A student playing a xenomorph expertly creeped about on stage and in the audience in the style of the titular alien. The student wore a costume made from donated foam, a plastic skeleton from the clearance aisle, and other materials, Entertainment Weekly reported. Other characters were photographed wearing spacesuits. And the sets were reportedly crafted from donated and recycled items, including old egg-carton boxes to create a computer lab.

Maybe the next step is to make it a musical. (“Love Song of the Chest Burster” perhaps?) and it could be the next Broadway sensation. Not since Carrie...

The Center for Humane Technology recently ranked how often people used various mobile apps, and how happy or unhappy they felt about all that screen time. Users of Calm and Google Calendar appeared to be the happiest, while users of Grindr and Candy Crush Saga seemed to be the unhappiest. At a quick glance, though, it seems that the people who seem the unhappiest spend the most time on apps in general. Perhaps it’s not the apps themselves, but just the waste of time... 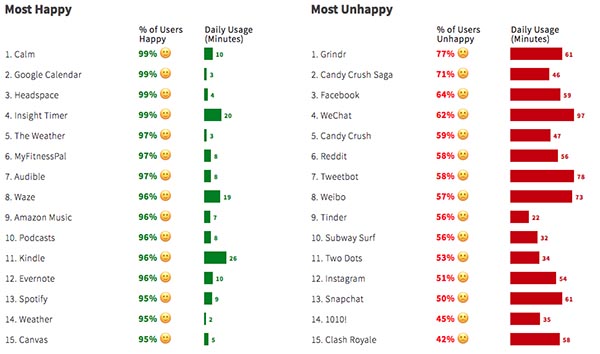 Blogger Maneesh Sethi hired someone to slap him in the face every time he used Facebook at work. His productivity went from 38% to 98%.

Not since D Day has the French coast seen this kind of invasion: for 35 years, plastic Garfield telephones have been washing up on the Iroise coast of Britanny. (That’s the cartoon cat Garfield, not former U.S. President James A. Garfield, which would be only slightly less weird.) After three-and-a-half decades, the mystery has been solved: a lost shipping container, blown overboard, ended up in a secluded sea cave, from which it has been egesting its kitschy kitty cargo ever since. The orange Garfield phone has thus become a French symbol of plastic pollution. Best line of the BBC story: “local officials say they will continue to harvest Garfields from the coastline.”

In 1997, 62 shipping containers full of 4.8 million LEGO pieces fell off a boat and have since been washing up on UK shores. Coincidentally, many of the lost LEGO were nautically themed.

1836: German-American brewer and founder of the Pabst Brewing Company Frederick Pabst born. (Did they sponsor the Hipster Olympics?)