Around the Web: State Books. Speaking of Food. New Words in the OED. Gen Z and Sustainable Streetwear. “The Scream” Reconsidered. Lost in MySpace. In Praise of Newsletters.

Which book was the most popular in your state in 2018? Did early humans' dietary changes affect speech? What new words did the OED add to the English lexicon? How are Gen Zers’ sustainable buying preferences driving new apparel products? Is Munch’s “Scream” guy actually screaming? People still use MySpace? Have you heard Vienna’s Vegetable Orchestra? All that and more in WhatTheyThink’s weekly miscellany.

The State of Books, or The Books of the States

Thriftbooks maps the most popular books of 2018 by state. Wyoming and Colorado are into classic dystopian fiction, Nebraska likes its dystopias a bit more recent, Texas is looking for love, more than a few states are looking to get rich quick, Delaware seems to have a drinking problem, and several states are just crazy about Harry. 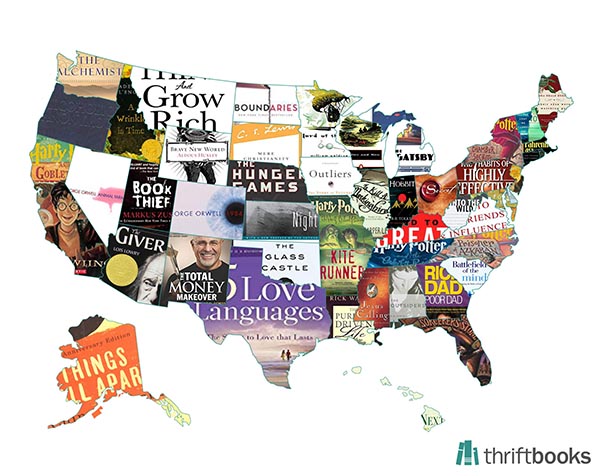 Another mock blue plaque has appeared in Hull - this time @alternaheritage have done one for John Venn next to the Drypool Bridge. The series of plaques celebrate local quirks & people. pic.twitter.com/FfxDfdXwMG

Brought to You By the Letter F

Did a change in human dietary habits change the way we speak? A new study published in Science suggests that a switch to cooked—and therefore softer—foods affected the kinds of sounds humans could make. Says the New York Times:

Certain sounds like these ‘f’ sounds are recent, and we can say with fairly good confidence that 20,000 or 100,000 years ago, these sounds just simply didn’t exist,” said Balthasar Bickel, a linguist at the University of Zurich and an author of the new research.

The study concluded that the transition to eating softer foods changed how bites developed as people aged. The physical changes, the authors said, made it slightly easier for farmers to make certain sounds, like “f” and “v.”

Through various other processes that the study did not directly address, these sounds made their way into about half the languages used today. The study’s authors called for greater consideration of biological factors in studying the development of human language.

To mark the 90th anniversary of the completion of its first edition, the venerable Oxford English Dictionary recently launched a crowdsourcing project to capture regional vocabulary. And some of those new terms made it into the official lexicon, such as “jibbons” (Welsh English for “spring onions”), “chuddies” (Indian English for “underpants”) and “sitooterie” (a Scottish term for “a place in which to sit out”).

Well, we should be grateful that at least they didn’t add an emoji this year.

And if you’re not into basketball, pit these “One-Hit Wonders” against each other.

(We should point out that some of these are not true “one-hit wonders.” But then we question some of the NCAA’s choices, as well.)

...with their predilection for sustainability and eco-friendly products are driving new types of products. From Adweek:

As Gen Z defines the types of products that resonate with them, brands like Allbirds and S’well have stood out for their sustainable sneakers and water bottles. Those products partially derive their value from sustainability and eco-friendly materials, which young individuals have increasingly favored.

A 2017 study from NDP Group found that Gen Z is willing to spend as much as 10 to 15 percent more on sustainably produced clothing. Meanwhile, a Nielsen study from 2015 found nearly three-quarters of 15- to 20-year-olds would pay more for a sustainable product, compared to just 51 percent of Baby Boomers.

And as brands look for new ways to cater to Gen Z’s love for sustainability, they’ve begun to tap into streetwear, which has a reputation for sustainability thanks to its drop model, second-hand reselling and gender neutral looks.

Is squeezing maple syrup out of a bottle too arduous a process? Why not try spray-on maple syrup.

For those of you who are not from Vermont or New Hampshire, that is not what happens if you vigorously shake a maple tree.

That’s Exactly How it Works

Think you know Edvard Munch’s The Scream? There has long been debate over whether the figure is itself screaming or is instead hearing a scream. A new display at the British Museum, a black-and-white lithograph of the image, suggests that the latter is the correct interpretation. Says the Telegraph:

The lithograph, unlike the coloured works, features an inscription by Munch that reads: “I felt the great scream throughout nature.”

It is a reference to his inspiration for the painting. Munch was walking by a fjord overlooking Oslo in 1892 when the sky turned blood red, a sight that had a profound effect upon him. 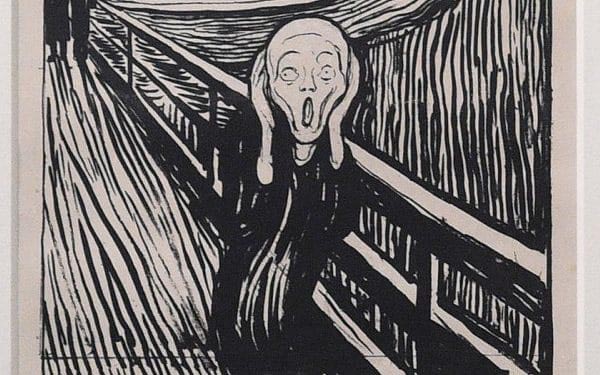 If you’re in the UK, be sure to check out “Edvard Munch: love and angst,” which runs at the British Museum from April 11 to July 21.

In the news this week was the story that during a server migration, MySpace (remember that?) lost virtually everything uploaded to the site during its first 12 years of operation. Said Gizmodo, “This would mean that music uploaded before around 2015 could have been lost.” So...basically everything that was ever uploaded to MySpace.

Probably the most surprising thing about this story is that MySpace still exists. Perhaps it’s social media for people who are antisocial.

Libraries are not just for books anymore. BBC Culture reports on nine libraries around the world that are transitioning from basic book repositories to “cultural hubs.”

This is the first ever public library in West Loop, and the 81st branch in the city. It’s housed in two former TV studios buildings, which have been given a weathered steel façade. Inside, previously concealed original bow-truss ceilings and skylights have been exposed. Designed by Skidmore Owings & Merrill, the 1,500-sq-m space doubles as a community centre, with meeting rooms and a digital learning space with a recording studio for teenagers. For younger children, there’s a ‘tinkering lab’ with a digital maker-space; and the storytelling rooms have walls with magnetic and writeable surfaces. And like other Chicago branches, free after-school tutoring is on offer.

Perhaps our European correspondent Morten Reitoft could tell us all about the Tingbjerg Library in Copenhagen.

Yes, you CAN make a font out of your handwriting... though it helps if you have the persistence of a type designer to really make it shine. Meet Adobe Handwriting, featuring the penwork of Ernie, Frank, and Tiffany ?????? https://t.co/WzlRJL4TjB pic.twitter.com/a31ZH76MnD

Looking for a social network that doesn’t bombard you with notifications and @mentions, or deploy ads that stalk you around the web? The New York Times sings the praises of the good old-fashioned newsletter:

my new social network is an email newsletter. Every week or so, I blast it out to a few thousand people who have signed up to read my musings. Some of them email back, occasionally leading to a thoughtful conversation. It’s still early in the experiment, but I think I love it.

The newsletter is not a new phenomenon. But there is a growing interest among those who are disenchanted with social media in what the writer Craig Mod has called “the world’s oldest networked publishing platform.” For us, the inbox is becoming a more attractive medium than the news feed.

Some of us miss printed newsletters, but we’ll take what we can get.

When in Vienna (and who among us isn’t regularly jetting off to Vienna?), be sure to check out the Vegetable Orchestra:

a 10-piece ensemble from the city of Beethoven, Brahms and Mozart that plays music with instruments made entirely from fresh produce. Over the past 21 years, the group has played nearly 300 shows at packed venues around the globe and performed everything from classical with cabbage to techno with turnips in a rich, rhythmic ratatouille. The orchestra recently released its fourth album after a successful ‘Krautfunding’ (‘herb-funding’) campaign and is showing the world that, actually, you can play with your food.

Vegetables are unpredictable,” said Susanna Gartmayer, who plays the carrot marimba, radish bass flute and a dozen other edible instruments in the group. “No two pieces of produce are the same. It’s a challenge.

They do tour regularly. We don’t know how much a ticket costs; probably a fair amount of cabbage.

Reasearchers at Bern University of Arts have discovered that Emmental cheese exposed to six months of hip hop while it is maturing has a stronger flavor and aroma than that exposed to Mozart or Led Zeppelin.

Swiss cheese, though, is positively affected by Houses of the Holey.

1931: Gambling is legalized in Nevada. (What are the odds it’ll catch on?)

1907: The first issue of the Georgian Bolshevik newspaper Dro is published.