Print books remain more popular than digital formats. Save the date: WTIN’s digital textile webinar. The first laptop typewriter. Why did people stop wearing hats? An exhibition of really tiny books. Unlucky in love? Try writing to a tree. (No, not D. Eadward Tree.) All that and more in WhatTheyThink’s weekly miscellany.

People are still reading books—and print books, at that. For all the hoopla surrounding ebooks, it looks like their time has come and gone, although they still have their fans. From Pew Research:

Despite some growth in certain digital formats, it remains the case that relatively few Americans consume digital books (which include audiobooks and e-books) to the exclusion of print. Some 39% of Americans say they read only print books, while 29% read in these digital formats and also read print books. Just 7% of Americans say they only read books in digital formats and have not read any print books in the past 12 months. Some demographic groups are more likely than others to be digital-only book readers, but in general this behavior is relatively rare across a wide range of demographics. 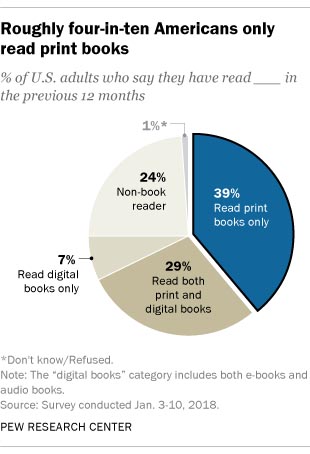 Of course, this only applies to people who read books at all.

I Shot an Arrow into My Phone

Just like the ol’ Bible in the breast pocket, today the smartphone can help save its owner from potentially fatal—yet admittedly rare—arrow attacks. Says Gizmodo:

According to the NSW [New South Wales] Police Force, the victim pulled into his driveway on the morning of March 13, 2019, only to notice a man standing outside his property armed with a bow and arrow when he got out of his car. That’s not something you see every day, even in Australia, so police say he pulled out his phone to snap a photo of the archer when the armed man raised his bow and fired.

Instead of hitting the victim, the arrow pierced the back of the raised smartphone, leaving a sharp tip protruding a couple of inches through the device’s display on the other side, and completely removing its screen protector—the man’s last line of defense.

The State of Digital Textile Printing

This webinar will focus on the current shape of the digital textile market, the key countries and forecast growth areas for the future. It will also explore new technologies influencing adoption and the crucial role of this high-growth sector in the digitalisation of the end-to-end textile and apparel supply chain.

Over at Boing Boing, a look at The Hall Typewriter, the first “laptop” writing device. Writes Martin Howard at Antique Typewriter:

In 1881, Thomas Hall, a Brooklyn engineer, invented the first portable typewriter that would enable a person to type with the machine anywhere, even on one’s lap. This was also the first index typewriter, a typewriter with no keyboard that requires one to use a selector. In this case, a black handle is depressed to choose the characters when typing. The Hall, despite its unusual design, proved to be quite successful over the next twenty years. 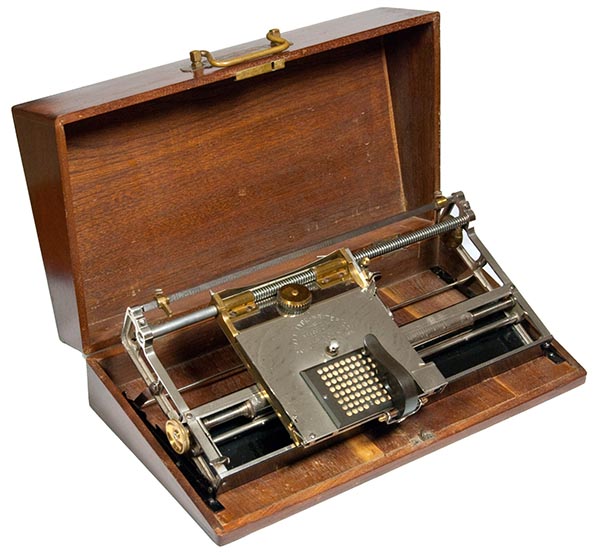 If you’re in New York and in the vicinity of the Grolier Club, be sure to check out  “A Matter of Size: Miniature Bindings and Texts from the Collection of Patricia J. Pistner”—a collection of around 950 tiny books. How tiny?

Most of the books in the exhibit are about one to three inches high and would nestle easily in the palm of your hand. Some are the size of a thumbnail. (There are also a few ultra-micro-miniatures, with no dimension greater than a quarter of an inch; one, shockingly, looks to be about as big as the period in this sentence.) The oldest is a cuneiform tablet from about 2300 B.C.; the newest was published last year. They are valued in the tens or hundreds or thousands of dollars; the rarest of miniature antiquarian books can sell in the six or even seven figures.

If you have ever seen photos or movies from the first half of the 20th century, you know that hats were all the rage. Anybody who was anybody, which by definition is everybody, wore a hat—men, women, children, perhaps even pets. And then—poof!—as if everyone got on a roller coaster, all (or most) of the hats disappeared. What caused this reversal of fashion?

As an article at Medium posits, ’twas technology. Specifically, the invention of the automobile.

Prior to the mass production of cars, walking was the main source of short-distance transportation. Carriages were commonly used for medium distances within a city, and trains were for long-distance travel. Commercial aviation didn’t exist for long-distance travel until just before the start of the Great Depression, and didn’t really take off until after the end of World War II. Because people didn’t need to travel far and often, they stayed within their city and traveled by foot every day, and because they were traveling by foot, they were under the sun all day long and needed something to cover their heads. Hats were a no-brainer.

Hats in fashion hit their peak around the 1920s, and set on a downhill path from there. At the same time, the FMC was able to flood the market with their Model Ts and almost completely dominate the American car market. Cars were widespread and used for everyday travel, taking people off of their feet and into cars with vinyl roofs (the steel roof was later applied in the mid-1930s). People suddenly realized that they really didn’t need hats inside their cars. They could go from house to car and from car to work. The car’s roof protected drivers and passengers from all kinds of weather. Why did they need to wear hats anymore?

The number of letters in winning words of the Scripps National Spelling Bee (USA) is closely correlated with the number of people killed in the USA by venomous spiders. (h/t https://t.co/RkbKnOJtgY) pic.twitter.com/QTnkcV4WW6 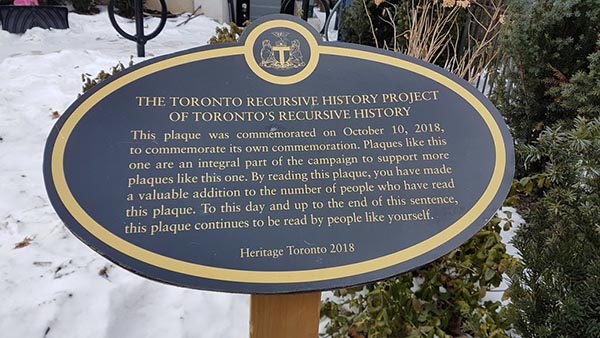 The Voice of the Car

We received a press release wasn't particualrly appropriate to our Newsfeed but which nonetheless caught our attention, perhaps because some of us in our misspent youth regularly watched Knight Rider. The release concerned the "Voice of the Car Summit" which will "Discuss the Future of Voice-First Technology and Its Impact on the Modern Car."

"The modern car has much to gain from integrating voice-first technology," noted Bradley Metrock, executive producer of Voice of the Car Summit, host of the leading technology podcast "This Week In Voice," and author of the new audiobook Perspectives on Gender in #VoiceFirst Technology. "Already, the race is on, as brands such as BMW, Mercedes, Tesla, Hyundai, Ford and many others integrate various voice assistants and associated tech into their vehicles. The Voice of the Car Summit will look at where the industry is headed, the best practices we've already learned, and who's leading the way with this next frontier in the emergence of voice-first technology."

The biggest issue, given what some of us tend to shout while driving, would be to keep the vehicle from attempting some rather biologically improbable actions.

Looking for love in all the wrong places? Tired of swiping in whatever direction one is supposed to swipe? Why not write a letter to a tree. It’s not as weird as it—...no, it’s every bit as weird as it sounds:

The Bridegroom’s Oak, a 500-year-old tree just outside of Eutin, in Germany, has its own postal address and actually receives around 40 letters every day. They are sent by love seekers from all around the world, in the hope that someone will read them and write back.

With so many dating apps and services available nowadays, sending letters to a tree in Germany hardly sounds like the most effective way to find love, but for true romantics, there’s really no comparison. There’s just something undeniably charming about sending a letter and allowing fate to work its magic, so the Bridegroom’s Oak remains very popular even in this digital age.

We can’t believe we’re asking this, but, um, does it work?

the BBC reports that it has been responsible for at least 100 marriages, as well as many other romantic relationships, but if you’re still not convinced, just ask Karl Heinz Martens, the postman who has been delivering letters to the tree for the last 20 years.

Atlas Obscura contributor frauhuber writes that a few days after appearing on a German television program about the tree, Martens received a personal letter from a woman in Hamburg, via the Bridegroom’s Oak. The two hit it off and have been happily married ever since.

We’re not sure that proves anything conclusively, but, hey, it sounds better than Tinder.

If trees aren’t your thing, try a cow:

Step aside, Tinder. There's now an app that will match you with your very own "connected cow" and ping you periodic updates during the day about how your cow is doing. It's called "Me+Moo". pic.twitter.com/pI1JZYL6tU

1851: The first performance of Rigoletto by Giuseppe Verdi takes place in Venice.

1989: Sir Tim Berners-Lee submitted his proposal to CERN for an information management system which would be developed into the world wide web.

1894: Coca-Cola is bottled and sold for the first time in Vicksburg, Mississippi, by local soda fountain operator Joseph A. Biedenharn.

1930: The news of the discovery of Pluto is telegraphed to the Harvard College Observatory.

1663: Otto von Guericke completesNature of Space and the Possibility of the Void, which postulated the existence of a vacuum.

1885: The Mikado, a light opera by W. S. Gilbert and Arthur Sullivan, receives its first public performance in London.