Around the Web: Forensic Fashion. Grayscale iPhone Display. 3D-Printed Orthotics. Hypnotic Password Retrieval. Independent Bookstore Owners Help Out One of Their Own.

Forensic garment analysts. Fast fashion and the environment. A toast matching system. John Steinbeck sends Marilyn Monroe a fan letter...sort of. Death of a robot. All that and more in WhatTheyThink’s weekly miscellany.

We welcome back the WhatTheyThink team from Hunkeler Innovationdays in Luzern, Switzerland.

I’m in Basel. There’s lots of reasons to like Switzerland and their flag is a big plus...classic!!???? pic.twitter.com/pDaE8cAo3p

The Guardian has a story on the real fashion police: forensic garment analysts.

I was visiting the fashion historian Amber Butchart, who had spent the day talking about dead bodies and the clothes they’re found in. We first met in 2002 when she worked as a buyer for vintage clothes shop Beyond Retro. Sorting through old dresses she became interested in what they told us about the past, and went back to university to study history. She hosted a BBC programme exploring the lives of historical figures through the clothes they wore and published books investigating fashion on film and nautical style. Last year Butchart was talking about fisherman’s jumpers on the radio when Dr Karl Harrison, one of the UK’s most experienced forensic archaeologists, was driving home, and he was struck by her explanation of what we communicate through clothing.

“I think like an archaeologist,” he says. “I use buried sequences of material, and this was how she described fashion, and meaning.” He sent her a “very uncrazy email” (he insists) inviting her to meet. He recently gave evidence to the House of Lords select committee on science and technology, impressing upon them how vital it was to maintain a healthy ecosystem in forensics. “Forensic science has become so focused on DNA. I’m trying to retain the importance of… looking at stuff.” Would she be interested, he asked, using slightly different words, in forming the fashion police?

A body had been found in a field. “It was unclear if it was a shallow burial or he’d died there,” Harrison says. “Soft tissue was lost, but clothes remained. They were out of character – it was a rural location.” Butchart adds: “He was in leisurewear.” By dating the clothes, she was able to identify him from a list of missing people. It was Butchart’s first police job (her title is consultant forensic garment analyst). It was daunting, she says, but fascinating, too. “It’s such an unusual application of what I do,” she says, whose mustard turban and dogtooth trousers mark her out as distinct from the be-fleeced CSIs. “But it felt important. This has more social value than selling old clothes.” She smiles wryly.

Underwear is a good example of how she applies her expertise. “It dates so well. Foundation garments are worn so close to the body, for one thing, and an offender discarding a body often leaves the underwear on.” And it’s possible to chart its history through fashion. “M&S has a great archive, which is really helpful. From girdles and bullet bras, to more natural shapes with no underwiring, or 90s Wonderbras. Knicker sizes have changed drastically, too – think, for example, of thongs in the 1980s.”

We’d rather not, thanks.

The growing trend toward “fast fashion” is not just good for improving the profitability of apparel manufacturers, or just for potentially reshoring textile production. It also has an environmental benefit. Says Fast Company:

For the past three decades, fashion brands have perfected the art of manufacturing cheap clothing by relying on poorly paid labor in developing countries, inventing inexpensive plastic-based materials, and increasing the speed of production. And because most brands project what customers will want to buy six to nine months in advance, designers rarely get their predictions right. There are always some looks that nobody wants to buy. When brands churn out thousands of new looks every season, the problem of unsold inventory just scales up. The New York Times reports that a power plant in Vasteras, the Swedish town where H&M launched, relies partly on burning products that the company cannot sell as a fuel source.

Churning out so many clothes has enormous environmental costs that aren’t immediately obvious to consumers.

Consider H&M’s great bonfire of 2018. The fast-fashion giant had $4.3 billion worth of inventory that was unsellable. Bloomberg reported that the company had acquired this enormous pile of clothes after months of markdowns, but the clothes just weren’t selling.

If Pantone ever branched out into bread:

Paint It, Black and White

Did you know that you can turn your iPhone display to black and white? And, why, you might ask, would anyone want to do this? Well, it turns out it may be of help to those who are trying to break the smartphone “addiction” (we hate using that term in connection with phones—maybe “compulsion” or “obsession” would be a better term). At Better Humans, one writer conducts an experiment to see if it works:

Making a phone display black and white short-circuits this tendency. Your phone no longer draws in your animal brain like bait. It goes from un-put-down-able to, well, boring.

Setting the phone to grayscale removes neurological rewards while preserving almost all of its utility-based value.

So, did it work? Sort of. It seems the key is to wea oneself off of the things that are best displayed in color.

...I’d made a few changes in my iPhone usage. First of all, I’d deleted Snapchat, Facebook, and Instagram (since then, I’ve also deleted LinkedIn, Quora, and Twitter off my phone). I’d also reorganized all my apps to take up as little visual space as possible, so they are neither superfluous information nor behavioral triggers.

Give it a shot. Gotta admit, though: it actually looks kind of cool in grayscale, almost like a German Expressionist iPhone. 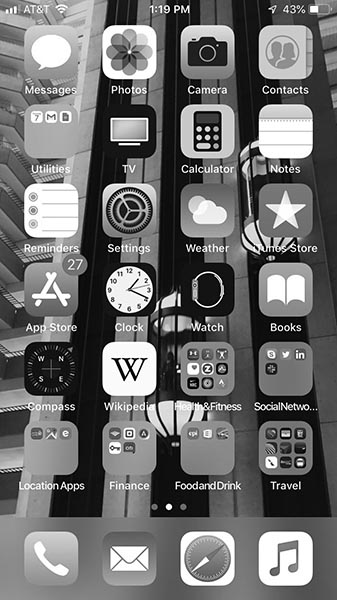 The red dots have less of a sense of urgency in gray, too.

And then it launched into a mournful rendition of “Daisy.”

The Agony of Da Feet

This review at Gizmodo of Dr. Scholl’s 3D-printed custom shoe inserts certainly caught our eye, and has tempted some of us to run (or limp) out and check them out. Basically, you take pictures of your feet (oh, you’ll need to turn the color back on) from various angles using the Dr. Scholl’s app (although some sound like you would need to be a contortionist), upload them, and in three weeks or so, a set of 3D-printed custom inserts—cost: $99—arrives in the mail. The verdict? Your mileage will vary, but reviewers said they weren’t as good as $500+ custom orthotics, but far better than the $15 ones you can get at CVS. If you have chronic foot poblems, it may be worth checking out.

In the pantheon of fan letters, this one must rank near the top. pic.twitter.com/CdlAMjQXRQ

As they say at Marginal Revolution (whence the link to this article), “markets in everything”:

Bitcoin's value has prompted early buyers to check their digital wallets. But some are finding that they've forgotten old passwords. That's where certified professional hypnotist Jason Miller comes in. For the price of half a bitcoin plus a 5 percent recovery fee, Miller claims that he can assist you in recalling your forgotten password from anywhere in the world, as long as you speak and understand English fluently.

Or they could just, you know, write it down.

Before deciding on wood pulp as a raw material for manufacturing paper, printers in the 19th century experimented with cabbage stumps, corn husks, asparagus, manure, asbestos, stone, and hornets’ nests.

It Takes a Village Bookstore

Ending this week on a happy note, a lovely story from the Washington Post about the Book Catapult, an independent bookstore in San Diego. The owner, Seth Marko, needed immediate open-heart surgery, and the only other employee was out with the flu. His wife Jennifer Powell closed the store to be with him in the hospital.

Her close friend Scott Ehrig-Burgess and his wife were watching [Powell’s daughter]  Josephine. But Ehrig-Burress, who works at another bookstore in town, wanted to help more.

“We were all sort of overwhelmed and in shock,” Ehrig-Burgess said.

He thought maybe he could help with the Book Catapult. He had worked there a few times when his friends first opened the store, in late 2017. He still had the keys, he knew how to work the register. He could try to keep it afloat.

“I thought, ‘I’ll pretend this is my store for the week,’ ” Ehrig-Burgess said.

He started calling mutual friends in the book-selling community to tell them that Marko was in surgery.

“People were like, ‘What can I do to help? Do you need somebody to be in the store?’ ” Ehrig-Burgess recalled. “I called four booksellers and had four volunteers.”

Within a day of Marko’s Jan. 27 surgery, Ehrig-Burgess had eight volunteers to help him keep the store open. They all worked at competing bookstores in the San Diego area and were willing to juggle their schedules or work during their free time to pitch in. One couple came down from Los Angeles.

That’s pretty neat, even if for no other reason than there are that many bookstores in the San Diego area.

1913: The United States Department of Labor is formed.

1974: People magazine is published for the first time in the United States as People Weekly.

1616: Nicolaus Copernicus’s book On the Revolutions of the Heavenly Spheres is added to the Index of Forbidden Books 73 years after it was first published.

Michelangelo wrote a poem about how much he disliked painting the Sistine Chapel and his aversion to painting in general. You can read it here: https://t.co/LpiAB5AOIk

1899: Bayer registers “Aspirin” as a trademark. What a headache that must have been.

1943: Norman Rockwell published Freedom from Want in The Saturday Evening Post with a matching essay by Carlos Bulosan as part of the Four Freedoms series.

1975: For the first time the Zapruder film of the assassination of John F. Kennedy is shown in motion to a national TV audience by Robert J. Groden and Dick Gregory.

1876: Alexander Graham Bell is granted a patent for an invention he calls the “telephone.”

1917: American engineer and programmer Frances Elizabeth “Betty” Holberton born. She was one of the six original programmers of ENIAC, the first general-purpose electronic digital computer, and was the inventor of breakpoints in computer debugging.

1775: An anonymous writer, thought by some to be Thomas Paine, publishes “African Slavery in America,” the first article in the American colonies calling for the emancipation of slaves and the abolition of slavery.

1931: American author and critic Neil Postman born. (His 1985 book Amusing Ourselves to Death was eerily prescient.)

1979: Philips demonstrates the compact disc publicly for the first time.

1776: The Wealth of Nations by Scottish economist and philosopher Adam Smith is published.

1959: The Barbie doll makes its debut at the American International Toy Fair in New York.

1876: The first successful test of a telephone is made by Alexander Graham Bell.