Getting a text from sender to receiver. The Internet of shoes. Nuclear testing and Kodak film. An oral history of “Office Space.” In praise of standards. Retrieving DNA from old books. Digitize yourself for the perfect fit. All that and more in WhatTheyThink’s weekly miscellany.

The Route of All Texts

Over at Motherboard, a very technical but still fascinating look at everything that happens to get a text message from sender to receiver—even if they’re only a few feet apart. An interesting fun fact:

These days, you might not even realize an SMS can only be 160 characters. Androids and iPhones, clever as they are, weave long messages together behind the scenes so when we receive them, we can’t tell they were split apart for delivery. But deep in their metal brains, our phones still deal with texts in 160-character chunks.

The allotment of 160 characters is a carefully chosen number, if you believe the legend: In 1984, German telephone engineer Friedhelm Hillebrand sat at his typewriter and wrote as many random sentences as came to his mind. His team then looked at postcards and telex messages, and noticed most fell below 160 characters. “Eureka!”, they presumably yelled in German, before setting the character limit of text messages in stone for the next three-plus decades.

what a time to be alive

From Alamogordo to Rochester

More than 1,900 miles away from Alamogordo, at the Rochester, NY headquarters of Eastman Kodak, a flood of complaints came in from business customers who had recently purchased sensitive X-ray film from the company. Black exposed spots on the film, or "fogging," had rendered it unusable. This perplexed many Kodak scientists, who had gone to great lengths to prevent contaminations like this.

Julian H. Webb, a physicist in Kodak's research department, took it upon himself to dig deeper and test the destroyed film. What he uncovered was shocking. The fogging of Kodak's film and the Trinity test in New Mexico were eerily connected, revealing some chilling secrets about the nuclear age.

An economist becomes an Uber driver and discovers some things about the gig economy.

This year marks the 20th anniversary of perhaps the best movie about work ever made: Office Space. Over at The Ringer, an oral history of the making of Mike Judge’s classic comedy.

We don’t know if this ever made Trish Witkowski’s Super Cool Fold of the Week, but over at Boing Boing, a pullout bed made from accordioned paper. 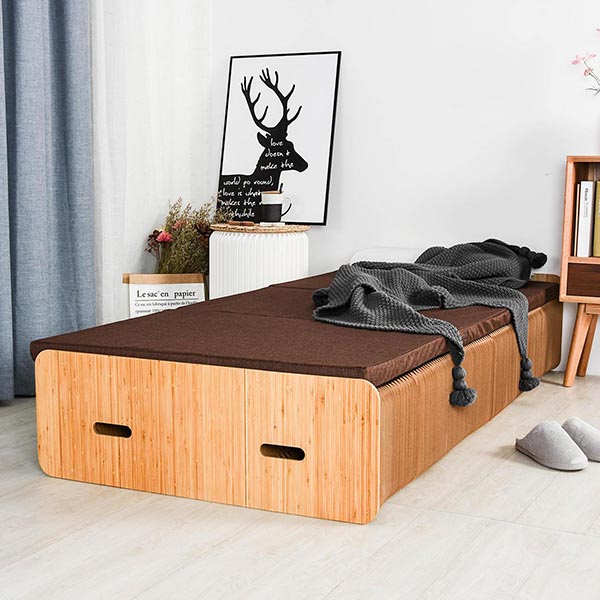 Perfect if you are expecting “Weird Al” Yankovic as a houseguest.

75% of the IKEA catalogue photos are CGI.

From the Atlantic, retrieving DNA from old books can yield clues about the past—such as the types of flowers that once grew in a particular region.

We Have Standards...They’re Low, But They’re Standards

Anyone who has been a longtime Apple customer will heartily agree with this New York Times editorial extolling the joy of standards.

Our modern existence depends on things we can take for granted. Cars run on gas from any gas station, the plugs for electrical devices fit into any socket, and smartphones connect to anything equipped with Bluetooth. All of these conveniences depend on technical standards, the silent and often forgotten foundations of technological societies.

The objects that surround us were designed to comply with standards. Consider the humble 8-by-16-inch concrete block, the specifications of which are defined in the Masonry Society’s “Building Code Requirements and Specification for Masonry Structures.”

It ends on a high note:

In an age of breathless enthusiasm for the new and “disruptive,” it’s worth remembering the mundane agreements embodied in the things around us. It’s very ordinariness and settledness of standards that enable us to survive, and to move ahead.

If you were going to create a repository of all of humankind’s achievements—and its failings—where would you put it? Of course: on the Moon.

Israel’s privately built Beresheet lunar lander is currently en route to the Moon—and tucked away on it is a small disk that’s crammed with 30 million pages of documents offering a primer on human knowledge. The collection of images, text, and symbols is the first step in a project to build a “Lunar Library” and part of a larger initiative to create a galactic archive of Earth.

Well, if they can build a FastSigns on the Moon,* why not a library? There is actually a method to the madness, the result of...well, madness.

The arctic home of the Doomsday Vault containing a selection of the world’s seeds is under threat of thawing as climate change becomes a more urgent reality. And nuclear annihilation still looms in the background as an ever-present reminder that Earth might not be the secure location to store all of the records of human knowledge and progress. For those reasons and more, the Arch Mission Foundation (AMF) is working on a multi-pronged approach to shrink down “the records of our civilization” into a sustainable format and fling them around the galaxy.

Pigs On the Wing

San Francisco International Airport has a therapy pig called Lilou. This has made my Sunday. Hello, ?@lilouthepig?, maybe we'll meet one day https://t.co/RtpB4TvWdp

When shopping for clothes, do you have problems finding the perfect fit? Maybe the solution is to digitize yourself and become an online-only entity. Enter the “Size Stream Scanner.” Literally. From the BBC:

The Size-Stream Scanner, as it's known, is currently just a prototype and is merely a space with a curtain pulled around it, fitted with 10 sensors, all trained on different parts of me. The music starts up, I place my feet on the marked spot, and grab a pair of handles.

Within seconds the machine has my precise dimensions after taking three scans of my body. On a screen outside I get to see myself modelled in 3D.

"We get to construct a body model of you, with all the lumps and bumps, so it's very personalised," explains Jim Downing, the chief technical officer of Metail, the Cambridge company that's developing this new tech.

1928: Charles Jenkins Laboratories of Washington, D.C. becomes the first holder of a broadcast license for television from the Federal Radio Commission.

1616: Galileo Galilei is formally banned by the Roman Catholic Church from teaching or defending the view that the earth orbits the sun.

1802: French author, poet, and playwright Victor Hugo born. (We had a hunch.)

1909: Kinemacolor, the first successful color motion picture process, is first shown to the general public at the Palace Theatre in London.

1918: American author and critic Theodore Sturgeon born. (It was an amok time.)

1812: Poet Lord Byron gives his first address as a member of the House of Lords, in defense of Luddite violence against Industrialism in his home county of Nottinghamshire.

1827: The Baltimore and Ohio Railroad is incorporated, becoming the first railroad in America offering commercial transportation of both people and freight.

1940: Basketball is televised for the first time (Fordham University vs. the University of Pittsburgh in Madison Square Garden).

1954: The first color television sets using the NTSC standard are offered for sale to the general public.

1970: American journalist, author, and accordion player Daniel Handler born. Under the name Lemony Snicket, he is the author of the children’s book series A Series of Unfortunate Events.

1983: The final episode of M*A*S*H airs, with almost 106 million viewers. It still holds the record for the highest viewership of a season finale.

1869: Dmitri Mendeleev finishes his design of the first periodic table of elements and sends it for publishing.

An alternative version of the periodic table, as designed by Theodor Benfey in 1964. pic.twitter.com/RTWgQ4jQK8

1917: The Zimmermann Telegram is reprinted in newspapers across the United States after the U.S. government releases its unencrypted text.

1998: Titanic became the first film to gross over $1 billion worldwide. (It is worth checking out this site that adjusts the highest-grossing movies for inflation.)

1717: The Loves of Mars and Venus is the first ballet performed in England.

1791: Long-distance communication speeds up with the unveiling of a semaphore machine in Paris.

1983: Compact discs and players are released for the first time in the United States and other markets. They had previously been available only in Japan.

1847: Scottish-American engineer and academic and inventor of the telephone Alexander Graham Bell born.

1873: The U.S. Congress enacts the Comstock Law, making it illegal to send any “obscene, lewd, or lascivious” books through the mail.

1875: Georges Bizet’s opera Carmen receives its première at the Opéra-Comique in Paris.

1875: The first ever organized indoor game of ice hockey is played in Montreal, Quebec, Canada.

1882: Italian swindler, con artist, and “businessman” Charles Ponzi born. He was a practitioner of what eventually became known as the “Ponzi scheme.”

1885: The American Telephone & Telegraph Company is incorporated in New York.

1923: TIME magazine is published for the first time.

1931: The United States adopts “The Star-Spangled Banner” as its national anthem.