Around the Web: BLS Loses Track of the Printing Industry. Where and What the Jobs Are. Apple’s “Netflix for News.” Confessions of a Content Marketer. Collecting the Elements.

The future of digital fabric printing. Printing industry government classifications consolidating. The fastest growing jobs in each state. Newspapers not subscribing to “Netflix for News.” The dark art of content marketing. A Death Star waffle maker. All that and more in WhatTheyThink’s weekly miscellany.

Your Inspirational Quote of the Day

Want to start each day with an inspirational quote? No, we don’t either. But for those who do, they can head over to inspirobot.me: “I am an artificial intelligence dedicated to generating unlimited amounts of unique inspirational quotes for endless enrichment of pointless human existence.” 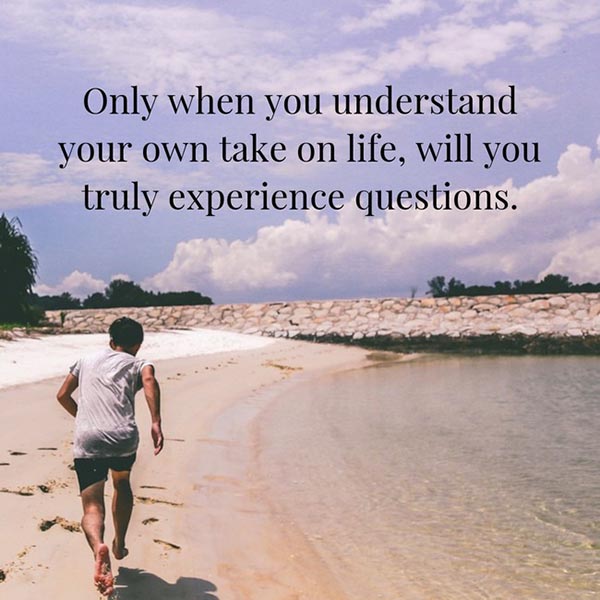 The Future of Digital Fabric Printing

This video created by Jefferson University and sponsored by Epson is worth a watch if you are thinking of getting into fabric printing or adding a digital component to your current business.

In this week’s Data Analysis feature, we comment at some length on a Washington Post article that appeared last week which reported that:

As of this month, “printer” and “screen printer” are no longer official jobs — at least as far as the Labor Department’s flagship release is concerned. The same goes for “printing support” jobs such as platemaking and prepress work.

(When our data research assistant was emailed a copy of this article, her comment was “What the hell do we do now?” PIA’s response is here.)

We won’t repeat our commentary here (go read it and also find out about book printing employment), but the consolidation of industry NAICS categories is nothing new (some of us are so old that we remember when “color separators” and “platemakers” were their own business categories). The consolidation of NAICS classifications within 323 is a reflection of the changes affecting the industry—print businesses are still being tracked, but we need to find out where they are being tracked.

After all, NAICS classifications are based on how a business defines itself to the Government via tax filings. We may think of them as “commercial printers” or “book printers” or “screen printers,” but they may think of themselves as something else, like “marketing services providers” or some such term that may not include the word “printing” at all.

The task of industry statisticians and analysts is to find out what they consider themselves and ferret them out in the data. It’s not gong to be easy—but markets and industries are ever-changing and we shouldn’t expect the old classifications to continue to be relevant.

Via Barry Ritholtz’s Big Picture blog, a chart showing the fastest growing jobs in each state. In eight states, that would be solar panel installers. In four states, wind turbine technicians. Also in four states: statisticians. What are the odds? 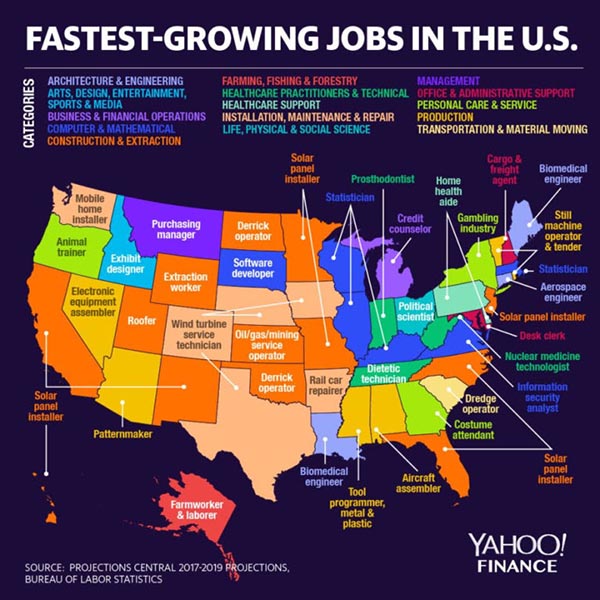 Don’t Be My Valentine

A zoo in Texas has introduced a rather different Valentine's package this year. For a small fee, they will name a cockroach after your ex and feed it to a meerkat. pic.twitter.com/VoMMu2pL43

Over at Gizmodo, Apple’s attempt at a “Netflix for News”—“a subscription-based news service that would get readers past paywalls at a discounted rate and share the revenue with publishers”—is not exactly a hit with newspaper publishers.

Apple’s negotiators have a planned price point of $10 a month to access an unlimited slew of content from participating publishers. Apple would keep around half of that, according to the [Wall Street] Journal’s sources, and the rest of the earnings “would go into a pool that would be divided among publishers according to the amount of time users spend engaged with their articles.”

The paper wrote that some major outlets including the New York Times and Washington Post are balking at those proposed terms, including concerns about both the revenue-sharing arrangement and a possible loss of control over valuable subscriber data.

People say journalism is dead. I say: both Twin Cities dailies are covering soup above the fold so no you’re wrong. pic.twitter.com/tPgfH5gZW8

Winter of Our Discontent Marketing

Over at Institutional Investor, Mary Lowengard offers some “Confessions of a Content Marketer.”

The purpose of writing before content marketing burst onto the scene was to inform. The raison d’être of content is to sell. Writers created stories. Content is more than a story. It is catnip, set out to lure the reader into the inverted triangle marketers call “the funnel.” Its purpose is to attract, engage, and ensnare customers. So what writers create is no longer writing — it is content. In fact, writers are no longer writers. They are content producers.

Our preferred replacement term for “writer” is “delivery system for words.”

Over at Scientific American, Senior Copy Editor Michael J. Battaglia waxes romantic about his childhood infatuation with the Periodic Table of Elements and his rather quixotic quest to collect every element.

with my limited financial and logistical resources, and lacking a particle accelerator, I could not acquire the whole periodic table of these bricks. If only there had been an eBay or other suppliers, which provide today’s collectors with exotic samples such as thorium (atomic number, 90) and promethium (61). Nevertheless, in those pre-wired times, I was still able to amass a decent set of periodic plunder.

Colour television was initially developed as a tool to demonstrate operations to medical students. One of the inventors remarked that they measured the quality of the picture by how many of the audience fainted.

These Are Not the Waffles You’re Looking For

Oh, yes they are! Via Boing Boing, enjoy the Dark Side of breakfast with this Death Star Waffle Iron. Only $40 at Amazon. Be sure to use Imperial margarine! 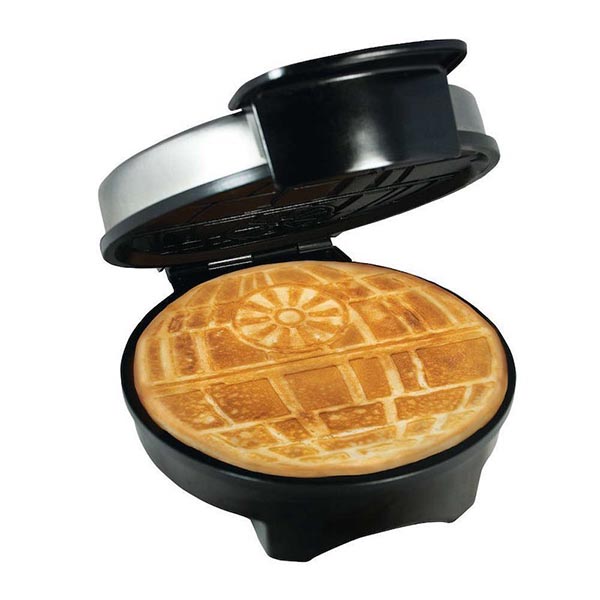 1938: BBC Television produces the world’s first ever science fiction television program, an adaptation of a section of the Karel ?apek play R.U.R., that coined the term “robot.”

1924: George Gershwin’s Rhapsody in Blue receives its premiere in a concert titled “An Experiment in Modern Music,” in Aeolian Hall, New York, by Paul Whiteman and his band, with Gershwin playing the piano.

1914: In New York City, the American Society of Composers, Authors and Publishers is established to protect the copyrighted musical compositions of its members.

Buzz saying Happy Birthday to Chuck Yeager is why god made Twitter. https://t.co/fgzL9Ct4Lh

1967: American researchers discover the Madrid Codices by Leonardo da Vinci in the National Library of Spain.

1819: American journalist and politician, and inventor of the typewriter Christopher Latham Sholes born.

1849: In New York City, James Knox Polk becomes the first serving President of the United States to have his photograph taken.

1876: Alexander Graham Bell applies for a patent for the telephone, as does Elisha Gray.

1961: Element 103, Lawrencium, is first synthesized at the University of California. Hopefully they sent an atom or two to Michael Battaglia. 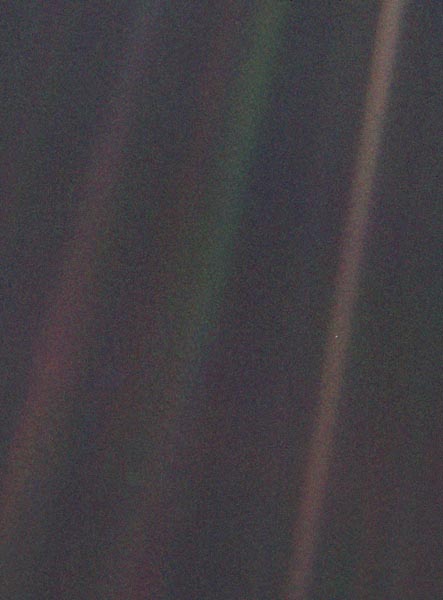 Seen from about 3.7 billion miles, Earth appears as a tiny dot (the blueish-white speck approximately halfway down the brown band to the right) in the darkness of deep space. Makes you think, don’t it?

2005: YouTube is launched by a group of college students, eventually becoming the largest video sharing website in the world and a main source for viral videos.

1870: Stevens Institute of Technology is founded in New Jersey, and offers the first Bachelor of Engineering degree in Mechanical Engineering.

1946: ENIAC, the first electronic general-purpose computer, is formally dedicated at the University of Pennsylvania in Philadelphia.

2001: The first draft of the complete human genome is published in Nature.

1933: The Blaine Act ends Prohibition in the United States. We’ll drink to that.

1978: The first computer bulletin board system is created (CBBS in Chicago).

1781: French physician and inventor of the stethoscope René Laennec born.

1904: Madama Butterfly receives its première at La Scala in Milan.