The oldest periodic table is uncovered in Scotland. UK’s Yellow Pages are no more. Cremona, Italy, goes quiet. A new zine highlights the new works in the public domain. The magnetic north pole is on the move. All that and more in WhatTheyThink’s weekly miscellany.

It’s always interesting the things you find when you’re cleaning. Some old coins, ancient software diskettes that don’t run on anything anymore—or a periodic table from the 19th century.

A classroom chart bearing an early version of the periodic table of elements has been discovered in a University of St. Andrews chemistry lab. Dating back to the 1880s, the chart is thought to be the world’s oldest. 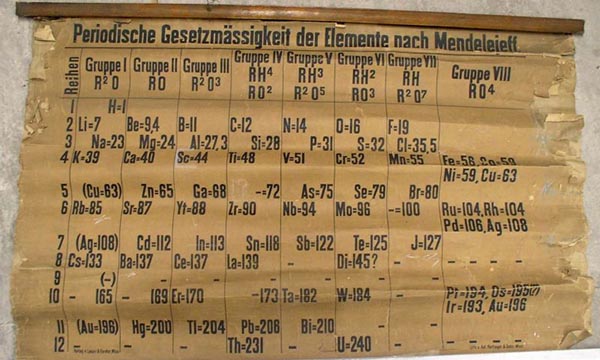 Which then raises the question: what’s a periodic table when it’s not a table?

The Internet of Green Things

The shape of things to come?

The Fingers Have Walked Away

Printed phone books still hang on in the U.S., but in the UK, after half a century, the Yellow Pages are no more.

In September 2017 Yellow Pages announced it would stop printing copies of its iconic book.

The final copies of the directory will be delivered to a family business in Brighton which has been using the book to advertise since 1966.

Recently, everyone in the city of Cremona, Italy, needed to remain absolutely silent. Some kind of supernatural menace? Nope: curators at the Museo del Violino are trying to digitally record original violins, and cellos built by Stradivarius, Amati, and Guarneri del Gesù in the 17th and 18th centuries. From the New York Times:

So that future generations won’t miss out on hearing the instruments, three sound engineers are producing the “Stradivarius Sound Bank” — a database storing all the possible tones that four instruments selected from the Museo del Violino’s collection can produce.

One of the engineers, Mattia Bersani, said that the sounds in the database could be manipulated with software to produce new recordings when the tone of the original instruments degraded. Musicians of the future would be able to “record a sonata with an instrument that will no longer function,” he said.

The site for the recording is not as soundproof as they would like, and since the surrounding streets are made of cobblestone, it can be an acoustic nightmare. But, since the mayor of Cremona is also the president of the Stradivarius Foundation, he appealed to the city’s residents to keep the noise down until recording could be completed. And they did!

And if it were a 24-hour clock instead of a 12-hour clock all the remaining numerals would be replaced by PANIC. https://t.co/ERTfx9iUpl

Masters of Their Public Domain

This year, a slew of classic works enter the public domain, as the 20-year freeze enacted in 1988 expires. Via Boing Boing, there is now a monthly zine called 1923 that will celebrate the public domaination of works first published in 1923.

every month, Higgins proposes to create a "a hand-made zine (think photocopied and stapled!), highlighting a work, an artist, a genre, or a medium" of "unusual and forgotten gems" from 1923, which will be made available to just 100 subscribers (sold out!); the PDF version is yours for $1/month.

Well, this is potentially upsetting. From Nature:

Something strange is going on at the top of the world. Earth’s north magnetic pole has been skittering away from Canada and towards Siberia, driven by liquid iron sloshing within the planet’s core. The magnetic pole is moving so quickly that it has forced the world’s geomagnetism experts into a rare move.

On 15 January, they are set to update the World Magnetic Model, which describes the planet’s magnetic field and underlies all modern navigation, from the systems that steer ships at sea to Google Maps on smartphones.

But this just in:

The release of the World Magnetic Model has been postponed to 30 January due to the ongoing US government shutdown.

1535: Following the Affair of the Placards—an incident in which anti-Catholic posters appeared in public places in Paris and in other major French cities, including one on the bedchamber door of King Francis I—French Protestants are burned at the stake in front of the Cathedral of Notre Dame de Paris. Don’t underestimate the power of display graphics!

1789: The first American novel, The Power of Sympathy or the Triumph of Nature Founded in Truth by William Hill Brown, is printed in Boston.

1927: Teddy Wakelam gives the first live radio commentary of a football match anywhere in the world, between Arsenal F.C. and Sheffield United at Highbury.

1984: The Apple Macintosh, the first consumer computer to popularize the computer mouse and the graphical user interface, is introduced during a Super Bowl XVIII television commercial.

1546: Having published nothing for 11 years, François Rabelais publishes the Tiers Livre, his sequel to Gargantua and Pantagruel.

1656: Blaise Pascal publishes the first of his Lettres provinciales.

1957: American inventor Walter Frederick Morrison sells the rights to his flying disc to the Wham-O toy company, which later renames it the “Frisbee.”

1998: Netscape announced Mozilla, with the intention to release Communicator code as open source.

1984: Apple Computer places the Macintosh personal computer on sale in the United States.

1858: The Wedding March by Felix Mendelssohn is played at the marriage of Queen Victoria's daughter, Victoria, and Friedrich of Prussia, and becomes a popular wedding processional.

1949: The first Emmy Awards are presented; the venue is the Hollywood Athletic Club.

1960: The National Association of Broadcasters reacts to the "payola" scandal by threatening fines for any disc jockeys who accept money for playing particular records.

1964: Blue Ribbon Sports is founded by University of Oregon track and field athletes, which would later become Nike.

1926: The first demonstration of the television by John Logie Baird.

1785: The University of Georgia is founded, the first public university in the United States.

1880: Thomas Edison receives the patent for the incandescent lamp.