Around the Web: 3D Printing Gets Big. Fruit Gets Branded. Textiles Get Transformed. An IoT Toothbrush Gets Updated. ThreadSol Gets Acquired. Edward Gorey Gets Tarotfied.

Phrozen, ironically, helps heat up the desktop 3D printer market. Is the U.S. missing the digital textile transformation bus? A new typeface is based on eye test characters, while another does away with the Latin alphabet entirely. Livetweeting an IoT toothbrush firmware update. All that and more in WhatTheyThink’s weekly miscellany.

Last week, MakerBot announced an inexpensive desktop 3D printer. The 3D printing market continues to make progress and price/performance ratios continue to be positive, putting 3D printing within reach of just about anyone. Here’s another example out of Taiwan, a sub-$2,000 3D printer from Phrozen, of an affordable 3D printer that appears to be making its way into an already crowded market, giving buyers even more options to consider.

At a recent Lyft event, the brand decided not to hand out the usual swag. You know, the frisbees or stress balls or notebooks or pens that pile up in your closets and drawers. Instead, in a large bowl, there was a pile of ripe green avocados, each printed with the Lyft logo. They were a hit. Attendees flocked around the fruit, Instagramming the heck out of them. Then, they put the avocados in their bags for a tasty afternoon snack.

It was the brainchild of San Francisco-based designer and visual artist Danielle Baskin, who subsequently founded a company called Branded Fruit to offer healthy edible alternatives to the usual conference swag.

She has now made branded fruit for everyone from Pizza Hut to Heroku to AT&T. Baskin has also had personal requests: One man ordered several avocados for a wedding proposal. Orders are as small as 10 pieces of fruit that will be centerpieces at an event to 500 pieces that will be handed to out to guests. Each fruit costs, on average, $5 to make. That’s not cheap in the world of swag, which is known for churning out products at rock-bottom prices, like $1 T-shirts or 50¢ tote bags. But it is reasonable to larger companies.

She has had to figure out how to efficiently and safely put logos of different colors on produce. In her work as a bicycle helmet designer, she taught herself to print on complicated surfaces. She applied this concept to fruit by cutting a logo out of thin vinyl that melts onto the fruit’s exterior, creating a design that looks flat, even though produce generally has a bumpy, textured surface.

So, she’s not using the usual digital inkjet printing technology that is helping the world of specialty printing explode, likely for ink chemistry reasons. A printer and inkset designed for digital direct-to-fruit printing could really make this a hot development area—and could other branded foodstuffs be far behind? (Baskin also offers branded garlic—which would definitely not be suitable for vampire conventions.) 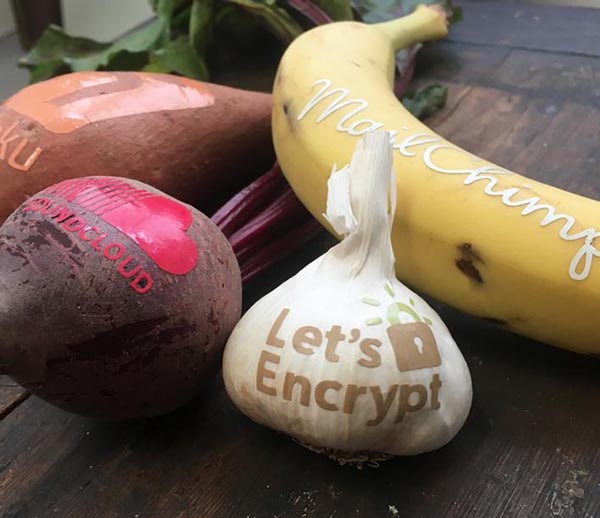 At any rate...food for thought.

This should raise alarm bells in North America and Europe who look to the digital transformation as a means of reshoring textile and apparel work. Abul Kasem Khan, president of Dhaka Chamber of Commerce and Industry, made this statement about digitalization: “If we fail to catch this bus, it will never come back for us again and we will lose our way.” Let's not lose our way. The future is here, and investments in digital are critical to our future success.

Do you wish that everything you read could remind you of your last eye exam? If so, good news! Dilate your pupils and gape in wonder at the new typeface Optician Sans. Says Gizmodo:

The project began as a rebranding commission from the Norwegian family eyecare business Optician-K. According to Fast Company, the design firm used the history of optometry as a springboard for inspiration, leading them to the pioneering letter designs developed by Dutch eye doctor Hermann Snellen in 1862 for his Snellen chart, which used mathematical precision to zero in on a patient’s visual acuity. Snellen did this by applying a 5 x 5 grid as the foundation for a total of 10 letters used in his tests.

One hitch—aside from the fact that Snellen charts don’t offer a full character set—is that some letters are meant to be hard to distinguish from one another (“c” and “o,” for example) especially at small sizes, since the point of an eye test is to, well, test vision. So the designers of Optician Sans took a few liberties with Snellen’s original characters to make them more readable without everyone needing to invest in a phoropter.

We’re not sure Optician Sans will catch on, but maybe we’re just being myopic. Still, we bet these fonts would look great on a Retina display. (Let us know if these jokes are too cornea.)

On the other hand, you may need to visit your optometrist if you decide to use Dotsies, another new typeface that, says Boing Boing, “abandons the latin alphabet completely in favor of dots.” And why would one want to do this? Says Dotsies: “The latin alphabet (abc...) was created thousands of years ago, and is optimized for writing, not reading. About time for an update, no? Dotsies is optimized for reading.” Please, go on:

Since latin letters (a, b, c, etc.) are optimized to be written by hand, they take up a lot of unnecessary space. Your eyes have to move at a frantic pace from left to right to read. The letters in Dotsies words smoosh together, so words look like shapes! Get more screen space! Save paper. Have a more comfortable reading experience

We’ll set aside 500 years of of type design intended to optimize readability, but you be the judge:

Last week, Coats, a UK-based industrial thread manufacturer, announced a significant investment in on-demand thread manufacturer Twine. This week, the company has acquired ThreadSol, a developer of cloud-based applications, to enhance its Global Services business. The suite of software solutions for the apparel and footwear industries is designed to enable brands, retailers, and manufacturers to drive productivity gains, supply chain control, and speed to market.

Black Mirror in the Bathroom

Oh, the Internet of Things is going to be such fun. Case in point: Andrew Crow’s livetweeting of the firmware update for his Internet-connected toothbrush.

My toothbrush wants to know where I am at all times. pic.twitter.com/SDdwUUVGJq

It does beg the question of why one would want an Internet-enabled toothbrush in the first place. Just think: hackers could access your brushing habits and blackmail you by threatening to tell your dentist.

JOANN and WeaveUp Join Forces for the MyFabric Online Program

WeaveUp helps independent Artists make their designs available for fabric. Now those designers have access to the massive JOANN customer base in the U.S. through the MyFabric online program. Customers visiting JOANN.com can use the technology to customize designs by scale, repeat, and, in most cases, color. The JOANN website receives over 10 million visits a month.

The recent Edward Gorey biography is on at least one of our editors’ holiday reading book piles, but Boing Boing digs up a Gorey-drawn Tarot card deck created in 1966.

Still, as much as we love us some Edward Gorey, for our Tarot card money, you can’t beat the Hello Kitty Tarot deck. 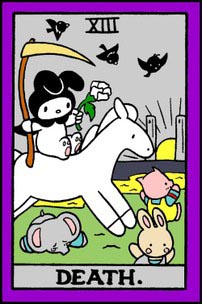 1892: The first issue of Vogueis published.

1989: The Simpsons first premieres on television with the episode “Simpsons Roasting on an Open Fire.”

1892: Premiere performance of The Nutcracker by Pyotr Ilyich Tchaikovsky in Saint Petersburg, Russia.

1776: Thomas Paine publishes one of a series of pamphlets in The Pennsylvania Journal entitled “The American Crisis.”

1843: The novella A Christmas Carol by Charles Dickens is first published. Bah!

1946: The film It’s a Wonderful Life is first released in New York City.

1971: The international aid organization Doctors Without Borders is founded by Bernard Kouchner and a group of journalists in Paris, France.

1879: World premiere of Henrik Ibsen’s A Doll’s House at the Royal Theatre in Copenhagen, Denmark.

1913: Arthur Wynne’s “word-cross,” the first crossword puzzle, is published in the New York World. The Oreo cookie had been introduced a year earlier. Coincidence? (See if we can spot the cruciverbalists out there.)

2001: Richard Reid attempts to destroy a passenger airliner by igniting explosives hidden in his shoes aboard American Airlines Flight 63; as a result, air travelers passing through security will have to take off their #$^&@! shoes in perpetuity.

1815: The novel Emma by Jane Austen is first published.

1947: The transistor is first demonstrated at Bell Laboratories.