Mix-and-match jigsaw puzzles. Postcards from World War I. The bestselling books of 2114. Alexa stars in a reboot of "Rear Window." Friendly skies, unfriendly seats. Weighing in on the kilogram. All that and more in WhatTheyThink's weekly miscellany.

Consumers increasingly want eco-friendly products. Now, Swiss specialty textile effects company HeiQ has partnered with DuPont to deliver this for leather goods—a PFC-free water repellent. The companies plan to extend this capability to other types of treatments as well.

Before envelopes were mass-produced, writers who wished to keep their messages secret would make the letter itself into its own seal. The technique, called "letterlocking", was used by Mary, Queen of Scots, Galileo, Machiavelli, and Marie Antoinette (among others). (Photo: Jldbb) pic.twitter.com/KZBnNafQpU

Here’s a little known fact, at least to us: jigsaw puzzle makers often use the same cutting die to make different puzzles. Makes sense, now that we think about it. It does allow for some creative mixing and matching. Boing Boing has a neat story on the art of the “puzzle montage.” 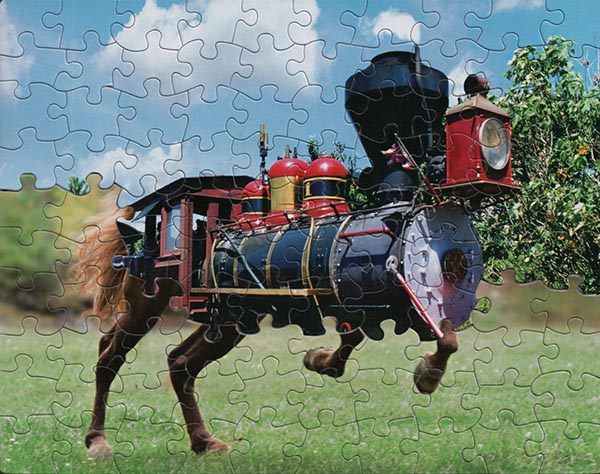 Our Type of Movie

Movies and typography have gone together since the beginning of...well, movies, and some movies (and even TV shows) are distinguished by their title (or movie poster) type design—and vice versa—and choice of typeface is important for conveying the feel of a movie. Vox looks at some recent movie and TV type treatments, and talks with type designers for Suspiria, Sorry to Bother You, and The Favourite.

Postcards from the Western Front

Last Sunday, November 11, marked the 100th anniversary of the end of the First World War. The BBC featured a series of hand-painted postcards from a German officer at the front.

Art student Otto Schubert (1892-1970) was 22 years old when he was drafted into the war. As the conflict unfolded, he painted a series of postcards that he sent to his sweetheart, Irma.

During the battles of Ypres and Verdun, Schubert filled dozens of military-issued postcards with vivid images depicting the daily realities and tragedies of war.

Following the war, Schubert went on to become a prolific graphic artist and book illustrator.

Created in the midst of devastation, his painted postcards and their messages give powerfully personal insights into events one century ago.

We’ve all heard of—and some have suffered from—writer’s block. But what about “reader’s block”? You know, that fight even voracious readers have to get going in a book...or perhaps anything longer than a tweet. Over at Mental Floss, some tips for overcoming this debilitating problem. Our favorite: “Disconnect From Technology.”

There are other reasons for wanting to disconnect from technology aside from catching up on your reading: getting away with murder. Apparently, in a weird, real-life, Internet of Things update of Rear Window, Alexa may have witnessed a double homicide—and prosecutors are trying to compel her (or, actually, Amazon) to testify.

state prosecutors are hoping [Alexa recordings] will produce key evidence in the murder case against Timothy Verrill, who is accused of killing Sullivan and her friend Jenna Pellegrini over suspicions that they were informing police about an alleged drug operation. Prosecutors say Alexa, the voice service for Amazon’s Echo smart devices, was sitting on the kitchen counter the entire time.

Now, a judge has ordered Amazon to turn over any recordings the Echo device may have made from Jan. 27, the day the women were killed, until Jan. 29, when police discovered them tucked beneath a tarp under the porch.

As the Internet of Things proliferates, it will be interesting to see the extent to which devices will be able to rat out criminals. When will Roombas start testifying in court? Will we have to pay hush money to toasters? The future will be...interesting.

Speaking of the future, if you are a literary completist and want to read all of the novels of Margaret Atwood, David Mitchell, or 100 or so other contemporary authors, alas, you will have to have yourself cryogenically frozen until the year 2114. Scottish artist Katie Patterson is building the Future Library on the outskirts of Oslo, Norway, which will be a time capsule of sorts. The library is collecting unpublished manuscripts from a variety of prominent 21st-century authors, which will be stored in an underground bunker. On that same site, trees are being planted which, in 96 years, will be harvested and used to make the paper on which the books will be printed.

Is the project worth it? We’ll let you know—via WhatTheyWillThink—in 2114.

It’s not just Alexa who can betray us. Now our mail can be used against us, albeit not by prosecutors, but by criminals, who it seems are using Informed Delivery for identity theft:

This week, the U.S. Secret Service issued an internal alert warning that many of its field offices have reported crooks are indeed using Informed Delivery to commit various identity theft and credit card fraud schemes.

The internal alert — sent by the Secret Service on Nov. 6 to its law enforcement partners nationwide — references a recent case in Michigan in which seven people were arrested for allegedly stealing credit cards from resident mailboxes after signing up as those victims at the USPS’s Web site.

According to the Secret Service alert, the accused used the Informed Delivery feature “to identify and intercept mail, and to further their identity theft fraud schemes.”

To be fair, we have heard tell of fraudsters boosting physical mail from mailboxes to accomplish the same thing. Well, maybe we can get Alexa after them.

Could You Stand It?

There is a great Bob Newhart stand-up comedy routine called “The Grace L. Ferguson Airline (and Storm Door Co.)” about a no-frills airline (written and recorded in the early 1960s, it sounds suspiciously like one or two current airlines we could name). At one point, Newhart (playing the pilot of the plane talking over the intercom) says, “I want to apologize for you having to stand all the way. If I can give you a little tip...Every half hour or so you’ll want to alternate your arms through those straps over your head. You folks flying in Tourist don’t have any straps, so don’t bother looking for them.”

Well, that may have been eerily prescient on Newhart’s part. From This Insider:

Italian airline seat manufacturer Aviointeriors has come up with a design for an airplane seat that it claims would make flights a lot cheaper.

But the seat comes with a catch: Passengers would essentially have to stand up throughout the flight. 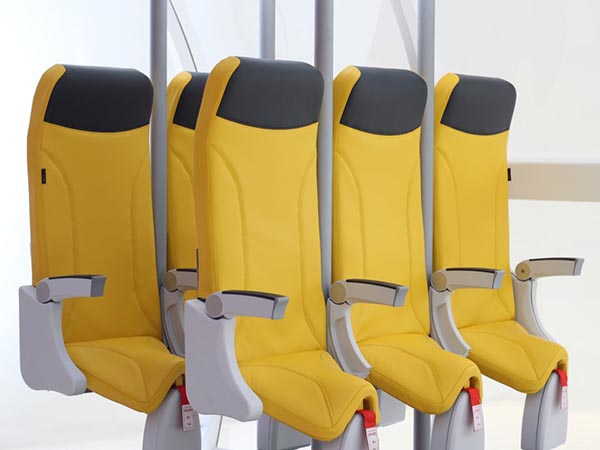 Think you know what a kilogram is? Well, think again. It seems the good ol’ kg is being redefined and is going the way of Pluto. Well, OK, not that drastically redefined. Says The Verge:

a metal kilogram made of platinum and iridium that resides under lock and key in an underground vault in Paris. It’s called the International Prototype Kilogram, or IPK, and since its creation in 1889 it has been the standard by which the world’s weights are defined. But not for much longer.

...on Friday, November 16th, a coup is planned in this international ministry of weights. After having served for 129 years as the world’s standard, the International Prototype Kilogram (or Le Grand K, as it’s known locally) will be stood down. Grandees of the International Bureau of Weights and Measures, which regulates the metric system, will gather in Versailles and vote to replace this physical artifact with a definition of the kilogram based on a fundamental constant of nature.

There is of course practically no chance that anyone other than a theoretical physicist will notice. Stepping on the bathroom scale, you won’t see any drastic (or any at all) weight gain or loss—especially if you weigh yourself in pounds.

1980: The NASA space probe Voyager I makes its closest approach to Saturn and takes the first images of its rings.

1851: Herman Melville’s novel Moby-Dick is published in the U.S.

1889: Pioneering female journalist Nellie Bly (aka Elizabeth Cochrane) begins a successful attempt to travel around the world in less than 80 days. She completes the trip in 72 days.

1952: The first regular UK Singles Chart is published by the New Musical Express.

1967: American physicist Theodore Maiman is given a patent for his ruby laser systems, the world’s first laser.

1968: The Cleveland Transit System becomes the first transit system in the western hemisphere to provide direct rapid transit service from a city's downtown to its major airport.

534: Justinian I, who was an Eastern Roman (Byzantine) emperor in Constantinople, approves and publishes the second and final revision of the Codex Justinianus.

1904: English engineer John Ambrose Fleming receives a patent for the thermionic valve (aka the vacuum tube).

1914: The Federal Reserve Bank of the United States officially opens.

1938: LSD is first synthesized by Albert Hofmann from ergotamine at the Sandoz Laboratories in Basel.

1790: German mathematician and astronomer August Ferdinand Möbius born. (It’s not true that his life had no beginning and no end.)

1947: American scientists John Bardeen and Walter Houser Brattain observe the basic principles of the transistor, a key element for the electronics revolution of the 20th century.

1968: Viewers of the Raiders–Jets football game in the eastern United States are denied the opportunity to watch its exciting finish when NBC broadcasts Heidiinstead, prompting changes to sports broadcasting in the U.S.

1787: French physicist and photographer, and inventor of the daguerreotype, Louis Daguerre, born.

1883: American and Canadian railroads institute five standard continental time zones, ending the confusion of thousands of local times. Well, it was about time.

1928: Release of the animated short Steamboat Willie, the first fully synchronized sound cartoon, directed by Walt Disney and Ub Iwerks, featuring the third appearances of cartoon characters Mickey Mouse and Minnie Mouse. This is considered by the Disney corporation to be Mickey’s birthday.