Print advertising success stories. Sans Forgetica, a font designed for memory retention. Young people are deleting their Facebook app. Social media users expect news to be inaccurate. WiFi 6 is coming; this may not be good news. All that and more in WhatTheyThink's weekly miscellany.

Project I and Stoll launch apparel manufacturing of the future. Fully-fashioned knit production in the U.S. as a result of this project can help with reshoring textile jobs and revenues.

Don’t write off print advertising so quickly, says SFGate’s Marketing Blog. “No one prints out a copy of the digital article when the Warriors win the NBA Final. They frame the front page of the newspaper.” Fair point. People have come to tune out digital ads (except those on our site, we hasten to add), but the problem isn’t a natural aversion to print, ads, or print ads just ads—and print—that don’t capture anyone’s attention. The post goes on to review some examples of “highly engaging, creatively designed print advertisements that caught people’s attention.”

The Washington Post writes about a new study from the All India Institute of Medical Sciences, a New Delhi-based group of public medical colleges. “More than 250 people worldwide have died while taking selfies in the last six years,” according to researchers. Top causes of selfie-induced death? Drowning is number one, followed by “transportation” (taking a selfie in front of an oncoming train, for reasons passing understanding) and “falling from heights.”

while the simple act of taking a selfie isn’t deadly, hazards arise when people take risks while trying to get that perfect shot.

“If you’re just standing, simply taking it with a celebrity or something, that’s not harmful,” [Agam Bansal, the study’s lead author] said. “But if that selfie is accompanied with risky behavior then that’s what makes the selfies dangerous.”

Bansal added he was also concerned about how many of the selfie-related fatalities involved young people. More than 85 percent of the victims were between the ages of 10 and 30, Bansal said.

Call us dubious, but, says The Guardian, “Australian researchers say they have developed a new tool that could help students cramming for exams – a font that helps the reader remember information.”

No, not Comic Sans, but rather “Sans Forgetica” (“without forgetting”; cute). Created through a collaboration between Melbourne, Australia-based RMIT University’s behavioral business lab and design school, its developers claim the font “uses psychological and design theories to aid memory retention.”

Typography lecturer Stephen Banham said the font had an unusual seven-degree back slant to the left and gaps in each letter.

“The mind will naturally seek to complete those shapes and so by doing that it slows the reading and triggers memory,” Banham told the Guardian.

“When we want to learn something and remember it, it’s good to have a little bit of an obstruction added to that learning process because if something is too easy it doesn’t create a memory trace,” she told the Guardian. “If it’s too difficult, it doesn’t leave a memory trace either. So you need to look for that sweet spot.”

In a study of 400 university students, researchers found a seven percentage point increase in the amount that participants remembered—57% of text written in Sans Forgetica compared with 50% in Arial.

Check it out and enter your own sample text here.

Everything sounds better in Latin.

Via The Daily Beast:

A new survey by the Pew Research Center found that most adults surveyed had curbed their Facebook use or adjusted their privacy settings in the past year. The survey followed revelations that political consulting company Cambridge Analytica had scraped the personal information of approximately 87 million Facebook users for use in targeted advertising. Of the 4,594 Pew survey respondents, young adults were the most likely to unplug from platform, with 44 percent of Facebook users ages 18 to 29 saying they’d deleted the app from their phone, although the survey did not ask whether respondents had deleted their accounts, too.

If no one thinks Facebook can’t go the way of Friendster, recall how quickly MySpace went from its own height of popularity to non-existence.

Who Are the Bulls?

Via The Big Picture, Fortune published a cool infographic that identified the drivers of the markets today. No surprise: its tech companies. 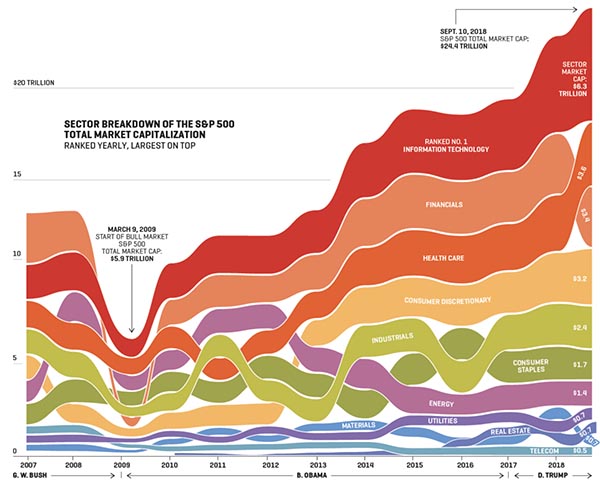 Here is an interesting infographic from Pew Research Centerthat identified how people perceive the accuracy of various news media. While 57% of social media news users expect the news they see on social media to be inaccurate. We don’t dispute that. But then we would: Among social media users who prefer to get their news via print, 68% think that news on social media is inaccurate. 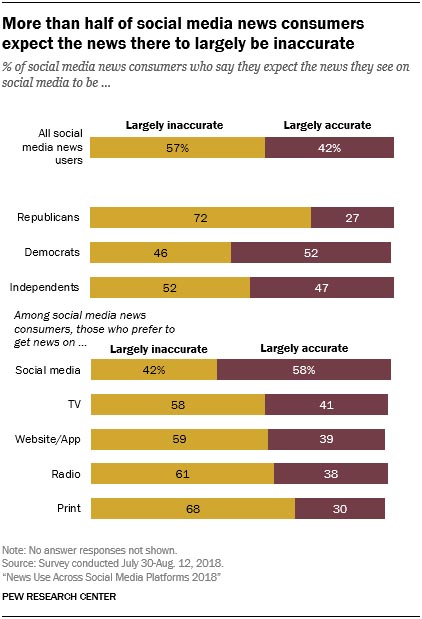 WiFi Is Getting an Upgrade

Via Gizmodo, WiFi 6 is on its way. Among other things, it will mean a speed boost.

As always, the improvements with this latest generation of wifi are in two key areas: Raw speed and throughput (if wifi was a highway, we’d be talking about a higher maximum speed limit for vehicles, as well as more lanes to handle more vehicles at once). Wi-Fi 6 will support 8K video streaming, provided your internet supplier is going to give you access to sufficient download speeds in the first place.

In practice that means support for transfer rates of 1.1Gbit/s over the 2.4GHz band (with four streams available) and 4.8Gbit/s over the 5GHz band (with eight streams available), though the technology is still being refined ahead of its full launch next year—those speeds may, in fact, go up (it’s been hitting 10Gbit/s in the lab). Roughly speaking, you can look forward to 4x to 10x speed increases in your wifi.

This sounds like good news, and generally it is. However, we should bear in mind that this may have unintended consequences for the printing industry. Dr. Joe once plotted printing shipments against increasing broadband speed: 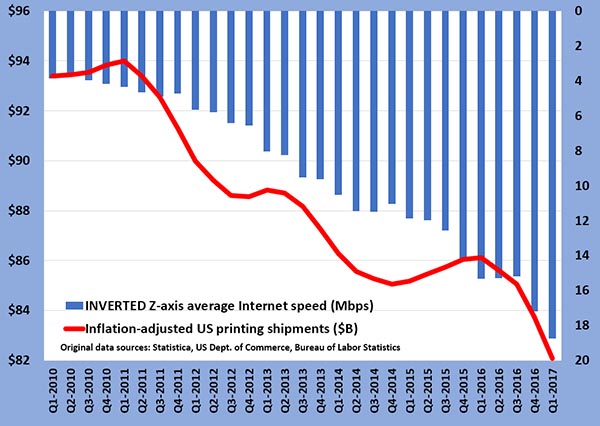 In other words, as broadband speed increases, printing shipments decline. However, data are not destiny. What’s bad for the old industry can be good for a new, digitally savvy industry.

1843: The News of the World tabloid begins publication in London.

1861: Mrs Beeton's Book of Household Management is published, going on to sell 60,000 copies in its first year and remaining in print until the present day.

1789: The United States Bill of Rights is sent to the various States for ratification.

1959: Rod Serling’s anthology series The Twilight Zone premieres on CBS. The first episode is “Where Is Everybody?”

1949: WERD, the first black-owned radio station in the United States, opens in Atlanta.

1957: The California State Superior Court rules that Allen Ginsberg’s Howl and Other Poems is not obscene.

1535: The Coverdale Bible is printed, with translations into English by William Tyndale and Myles Coverdale.

1947: In the first televised Oval Office address, President Truman asks Americans to reduce their consumption of grain in order to help starving Europeans.

1723: Benjamin Franklin arrives in Philadelphia at the age of 17.

1927: Opening of The Jazz Singer, the first significant “talkie” movie.

2010: Instagram is founded by Kevin Systrom and Mike Krieger.