Seth Godin’s keynote encouraged print service providers to eschew commodity printing and focus on selling products that are “remarkable.” “You don’t sell paper and ink,” he said, “you sell a feeling.” It was a fitting theme with which to open PRINT 18.

“In a race to the bottom, the problem is that you may win.”

Such is the peril of focusing on commodity printing, said Seth Godin, as PRINT 18 kicked off with a keynote by the marketing guru titled “Thriving in the Connected Environment.” “The role of print and paper has fundamentally changed,” said Mr. Godin. As we switch from a mass market to a more customized and personalized economy, printers find themselves in the position of “pushing stuff into a market that does not want it,” he said. “Or trying to solve a problem that people don’t think they have.”

Traditionally, printing and marketing were on two different tracks, coming together only when marketers decided that they needed something printed. Today, however, that is changing. “Marketing is playing a bigger role in our industry,” said Ragni Mehta, Xerox’s Vice President & General Manager, Cut Sheet Business, in her introduction to Mr. Godin’s keynote. The keynote session was sponsored by Xerox. 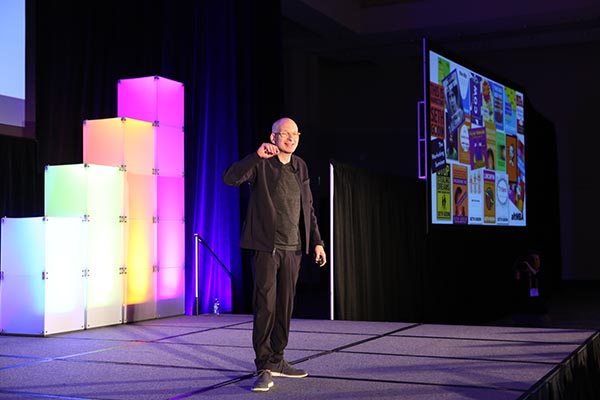 As anyone who ever read any of Mr. Godin’s many books knows, marketers are selling a story or an experience more than they are selling a product. He used the example of gourmet cat and dog food. “Cat and dog food are not for cats and dogs,” said Mr. Godin. “If cat food was for cats it would be mouse-flavored. It’s really for cat owners.” Indeed, he added that you can buy dog food that costs more than prime beef straight from the butcher. “And dogs are no happier eating it than Alpo.”

So selling cat and dog food—or a diamond ring in a Tiffany box ($6,000) vs. straight from the Diamond Exchange without a Tiffany box ($1,000)—is about selling  a particular feeling. Pet owners want to think that—or feel like—they are cosseting their pets with top-of-the-line gourmet food.

Likewise, printers need to rethink what it is they are actually selling. “You don’t sell paper and ink,” he said, “you sell a feeling.” Or something remarkable; and, after all, something is only remarkable if other people make remarks about it. “Remarkable means my value goes up if other people talk about it.”

Printers, like those running just about any business these days, need to be proactive in making change happen. It’s about not staying with the status quo, not “fitting in.” “The reason why people want you to fit in is so they can ignore you,” said Mr. Godin. Printers have to make change happen—even though there is the “tension” that it might not work. He called it salto mortale, the “dangerous leap.” You have to take risks. “If failure is not an option, than neither is success.”

PRINT 18 attendees seem interested in taking that leap. The show wasn’t open for more than a couple hours when MGI inked a hefty deal with Chicago’s Team Concept for a JET Varnish 3D. For 20 years, Team Concept has provided embossing work for the industry, and bought the JET Varnish to help to pursue the luxury packaging market—high-end short-run folding cartons. (You may also have seen from our newsfeed that Smartpress signed a multi-million dollar deal for five HP Indigo high-definition presses.)

“Digital embellishments,” such as those that can be created using new technologies such as those in MGI’s portfolio, are one way to make print “remarkable.” There are many other ways of doing so on the show floor this week, as well, as we will be seeing throughout the rest of this week’s show.