LSC Communications, easily the most active company on our deal log since LSC’s formation in 2016, announced an equity investment in MAZ Systems. The acquired company is a “content logistics” company that has created a cloud-based software system that delivers articles, video, images, and audio to a multitude of content-delivery platforms including Apple iOS, Android, Apple TV, Roku, Amazon Fire, Apple News, Twitter, Amazon Alexa, LinkedIn, Slack, Xbox, YouTube, Vimeo, and others. The software navigates the programming nuances required by each digital platform. The content creator (publisher, brand, media provider, or organization) is freed up to do what it does best, create original content. As new platforms emerge, the MAZ folks program the new pathways and connections; customers are relieved of the cost and complexity of keeping up with all these digital channels.

As a printer of many publications, a position that LSC reinforced in September 2017 with its acquisition of Publishers Press, LSC is certainly affected by the digital headwinds facing publishers. Those digital forces are driving down both paid circulation numbers and ad page counts. Those seemingly relentless dynamics directly equate to press runs of fewer pages and lower quantities. In an attempt to explain how it makes sense to help its clients deliver content electronically via the expanding multitude of digital channels, LSC’s new President of Business Development stated, “LSC will harness MAZ’s technology to complement and expand its legacy platform to expose clients to new distribution solutions that help streamline and accelerate their business strategies beyond print.”

I must admit that I’m tempted to be enthusiastic when I see a printing company invest in ancillary services that create “value-added” around the core deliverable printed product. Examples of these acquisitions abound in our industry. Commercial printers acquire mailing services firms; high-volume printers build out sophisticated commingling operations and acquire logistics companies to drive down postal and delivery costs for their clients; commercial printers swim upstream into creative offerings; transactional printers establish highly secure facilities and compliance procedures to maintain data integrity; direct mail printers seek to establish closed-loop data analytics to prove and improve the effectiveness of their clients’ direct mail campaigns; offset printers acquire a wide-format shop—you get the point. Printing companies are using acquisitions to redefine their place in the market by expanding into adjacent services.

Some commercial printing companies have successfully navigated the transformation to become true Marketing Service Providers. Otherwise known as “MSPs,” these companies provide a full range of competencies, including ideation, creative and graphic design, website development and maintenance, campaign management, social media marketing, and yes, there is even print in the mix! In many cases, the printed messages are still a core component of the marketing campaign and often remain the primary revenue driver for the company.

Back in 2013, Brown Printing acquired Nellymoser, an innovator in mobile and print-to-digital campaigns that served the same advertisers that placed ads in the magazines printed by Brown (see The Target Report - Is the Printing Industry Devolving or Evolving? – March 2013). At the time, there was lots of excitement around the ideas of QR codes, augmented reality (“AR”), and NFC (near-field communication). All these technologies were designed to connect a printed page to a webpage on a digital device, usually a smartphone. By helping publishers use print to drive webpage traffic, or so the theory went, Brown (and other printers) were adding value to the print proposition that was their core competency and deliverable. Despite the apparent game-changing acquisition of a leading-edge mobile technology company, a year and month later, Brown Printing was acquired by Quad/Graphics at what appeared to be a bargain-basement price (see The Target Report - A Tale of Two Cities, the Best of Multiples, the Worst of Multiples – April 2014).

As LSC invests in the new digital content technology, it has continued to rationalize and divest non-core print operations. In July, the company announced the sale of its European print operations to the UK-based Walstead Group, a private equity-backed printing roll-up with trailing revenues of approximately $796 million. The business transferred from LSC to Walstead represents printing revenues of about $250 million and a reduction in LSC’s projected EBITDA of approximately $12 million.

A year ago, LSC made an equity investment in Authors, a software company that uses artificial intelligence to analyze editorial content (see The Target Report - Transformation and Rebirth – July 2017). That investment, and the recently announced deal with MAZ Systems, are clearly aimed at acquiring the next wave of content-related digital technology to serve the company’s publishing customers. The question remains: does the acquisition of software that automates editorial functions and enables efficient content distribution via digital channels support and drive core print operations? Or does the onslaught of digital publishing technology continue to eat away at high-volume publication printers, despite their best efforts to acquire and implement these technologies?

Fortis Solutions Group, a serial acquirer in the label segment, announced its latest deal, the purchase of Lewis Label Products in Forth Worth, Tex. The acquired company manufactures pressure-sensitive labels, shrink sleeves, and flexible packaging. Backed by Main Post Partners since 2017, the company now has over 400 employees with locations in seven states.

Resource Label Group, a portfolio company of First Atlantic Capital and TPG Growth, acquired Ingenious Packaging in Toronto. Ingenious produces pressure-sensitive labels and shrink sleeves for a wide variety of consumer products. Formerly part of Tapp Label, the Toronto operation was spun off and renamed “Ingenious” when G3 Enterprises, the investment arm of the third generation of Gallo winemaking family, acquired Tapp’s Oregon and California plants which mostly produced labels for the wine industry. This latest acquisition brings Resource Label Group’s locations to 15 and is the company’s first in Canada.

Inovar Packaging Group, headquartered in Dallas, picked up Topp Labels in Miami and announced plans to tuck the acquired company into its existing location in Fort Lauderdale, Florida. Inovar was acquired by AEA Investors in January 2016 and later that year announced a triple-play acquisition of three label printing companies (see Private Equity LOVES Labels – August 2016). Inovar followed that deal shortly thereafter with the acquisition of LabelPrint America in Newburyport, Mass. 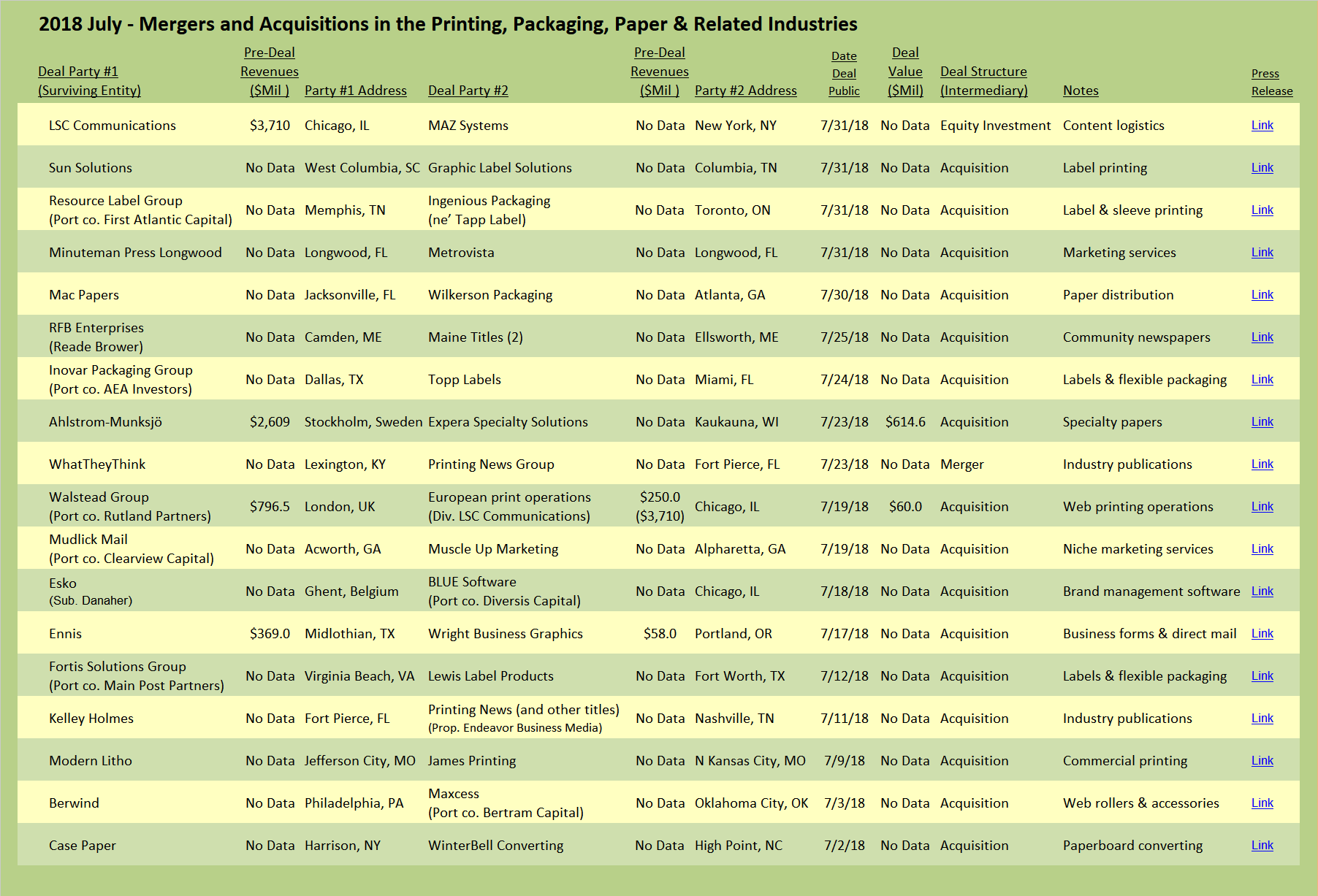