A library in Portugal uses a colony of bats to help preserve old books and documents. The UK is confounded by the name change from “Salad Cream” to “Sandwich Cream.” The new heroes of our age: Country Time Lemonade and Domino’s Pizza? A random slide from Mary Meeker’s “Internet Trends Report.” Uncovering lost “data” from ancient manuscripts. What happened this week in printing and publishing history. All that and more in WhatTheyThink's weekly miscellany.

Bats in the Biblioteca

One problem libraries often have, especially those that have old and rare items in their collections, is staving off the various critters that are liable to munch on or otherwise damage books and other materials. One library in Portugal, at the University of Coimbra, has turned to nature for help. Specifically, bats. And it’s not as batty an idea as it may sound. From Smithsonian:

In Coimbra, a colony of Common pipistrelle bats makes their home behind the bookshelves of the university’s Joanina Library, emerging at nightfall to consume flies and gnats and other pests before swooping out the library windows and across the hilltop college town in search of water. The service they provide is indispensable: They eat insects in the library that might otherwise feed on manuscript pages.

Want to see the bats for yourself?

The best chance at glimpsing them in action comes at nightfall: Stand on the steps just outside the library’s dense teakwood door, and wait for them to emerge and wing their way across the cobbled town square and into the hills.

You can also try visiting the library on a rainy day, when the chirps and squawks of bats will often resonate from deep within the stacks. Librarians say they often hear the bats “singing” — emitting social vocalizations — late in the afternoon on drizzly days.

Do the librarians shush the bats?

What’s In a Name?

Those of you based in the UK may have seen the news recently that Heinz has renamed its “Salad Cream” as “Sandwich Cream.” Comedian David Mitchell devoted the first portion of his Guardian column last Sunday to the rebranding of the “100-year-old goo”:

Kraft Heinz...is considering a change because, as its spokesman told trade magazine the Grocer, the name no longer “fairly represents the product’s ingredients or usage occasions”.

Obviously this raises as many questions as it answers…

The name no longer represents its ingredients? What does that mean? No one ever thought the stuff was made of salad, did they? Are they now hoping to imply that it’s made of sandwiches? Sandwiches are a very unusual ingredient – they’re more of an end product of a culinary process, like a pie or an omelette or a pavlova. You don’t put sandwiches in things, you put things in sandwiches. Salad Cream, for example.

So I get the “usage occasions” part. Apparently, these days only 14% of the cream’s usage occasions are saladous, while I imagine considerably more are sandwichsome (I claim first usage occasion of both of those adjectives). And this anomaly has started to irk some of the people at Kraft Heinz: people who are paid to consider tinkering with things, and probably feel their salaries are harder to justify if they always say everything’s fine as it is. The more they think about Salad Cream being used on sandwiches, and not being used on salads, the more it’s like a painting that needs straightening, the more it niggles.

Called On the Carpet

You probably know people who love to boast about how much they paid for various items. IKEA has now made flaunting one’s home décor spending easy—by actually selling a printed receipt area rug. 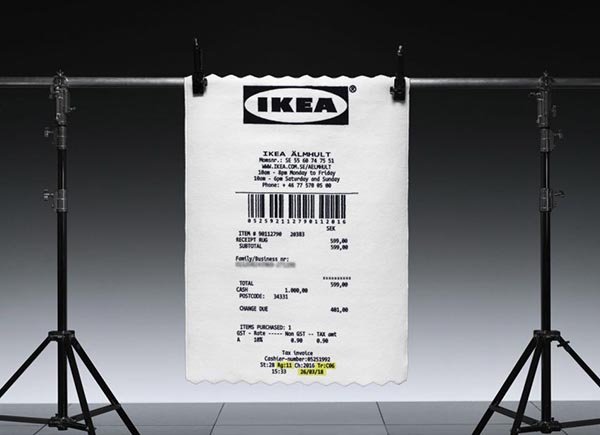 It was created by fashion designer Virgil Abloh and is part of a larger collection he designed for IKEA.

If your child (or perhaps even yourself) is one of those lemontrepreneurs who operate lemonade stands in the summer, it is (apparently) not unheard of for such unlicensed businesses to incur fines. What is a budding businessman to do? Well, fortunately, when the law gives you lemons, you can call Country Time, yes, the lemonade mix makers, and they will pay your fine.

if your lemonade stand has incurred a fine during the 2017 or 2018 calendar year OR if you've purchased a permit for 2018 so your miniature entrepreneur can sell lemonade, turn to the good folks at Legal-Ade. We'll cover your fine or permit fees up to $300.

A Pizza the Action

It’s not just the soft drink industry that is coming to everyone’s civic and legal rescue. Domino’s Pizza, tired of pothole-infested roads destroying pizzas out for delivery. They are not sitting idly! From Jalopnik:

Domino’s is tired of their innocent pizzas, who only wish to serve humankind, being beaten all to hell by poorly-maintained roads. They even have a website that shows, in graphic, pizza-box-cam detail, what brutal hell pizzas are put through when their delivery vehicle impacts a pothole.

To remedy this, Domino’s has been hiring work crews to repair potholes in a number of cities, including Burbank, California (five holes fixed), Bartonville, Texas (eight holes), an impressive 40 holes fixed in Milford, Delaware, and an astounding 150 potholes filled in Athens, Georgia.

And to make sure that credit (or branding, if you prefer) is given where it’s due, they are adding their logo and tagline (missing a couple of commas) to their handiwork. 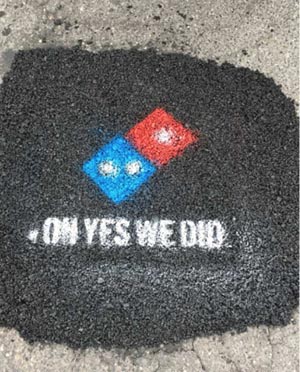 They could go one better and fill in the potholes with pizza.

Last week, we began playing “Mary Meeker Roulette”—randomly picking a slide out of the 294 in Mary Meeker’s latest Internet Trends Report. Round and round she goes… Our second spin lands on Slide 145: “Technology Disruption Drivers.” 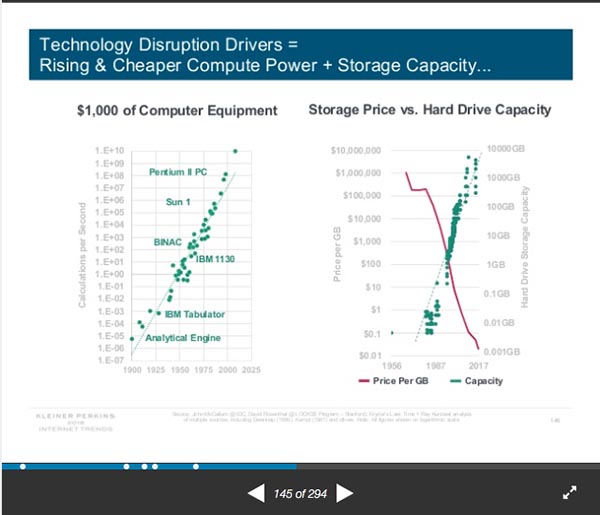 Not surprisingly, technology disruption drivers are cheaper yet more powerful computers as well as declining cost-per-gigabyte for storage. (Not all the slides can be showstoppers.)

The AxiDraw is a simple, modern, precise, and versatile pen plotter, capable of writing or drawing on almost any flat surface. It can write with your favorite fountain pens, permanent markers, and other writing implements to handle an endless variety of applications. Its unique design features a writing head that extends beyond the machine, making it possible to draw on objects bigger than the machine itself.

It can also write/draw on textiles, such as T shirts. 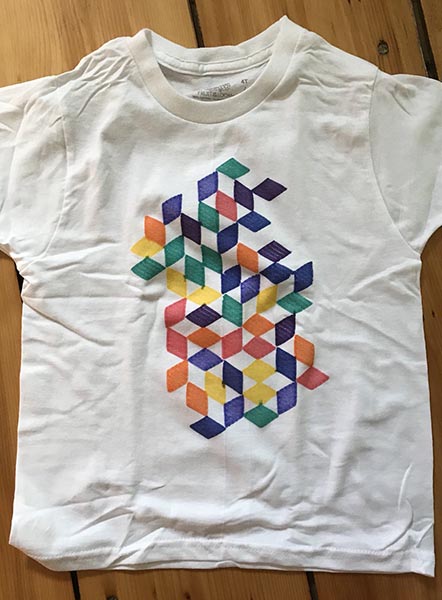 Father Justin is a Greek Orthodox monk at St. Catherine’s, the world’s oldest still-working monastery located in Egypt’s Sinai desert. His task is to digitize the monastery’s collection of ancient manuscripts, and during this project, he and his confréres have also been uncovering the hidden writing beneath the written text. From the BBC:

A team of scientists and photographers working alongside Fr Justin has been using multi-spectral imaging to reveal passages hidden beneath the manuscripts' visible text.

This is because, back in the day (and we’re talking circa first-century AD), when monks needed a fresh sheet of parchment to write down the Gospels or other text, they would recycle whatever seemingly unimportant books or documents they had hanging around. They did this by scraping or scrubbing the original ink off and writing over the erased surface. These reused manuscripts are known as palimpsests.

At least 170 of the 4,500 manuscripts in the [St. Catherine’s] collection are recycled manuscripts, known as palimpsests.

Although the manuscript examined by Prof Brown had been discovered in 1975, it is only now that scholars have been able to distinguish the different layers using a variety of light waves. Before they relied on the naked eye or corrosive chemicals.

The “recovered” documents are starting to change some preconceived notions about antiquity.

It turned out that part of the gospels had been made from an ancient Greek medical text which advised treating scorpion bites with a paste made out of a plant boiled in olive oil.

The rest of the manuscript sheds a light on international relations during the dark ages and an "incredibly complex interaction of different cultures," says Prof Brown.

These new document recovery methods are being applied to other collections as well.

The techniques mastered in Sinai have been used by EMEL, the Early Manuscripts Electronic Library, which is based in California, on collections belonging to Cambridge University and the Berlin State Library as well as the faded diaries of explorer David Livingstone written on his trips to central Africa.

Tomorrow, June 16, is Bloomsday, the day of the year when literature nerds celebrate the life and works of Irish author James Joyce, especially his novel Ulysses, the events of which take place in a single day—June 16, 1904. Check your local listings for events in your neck of the woods. (The webmaster for Spokane, Wash.’s [unrelated] Lilac Bloomsday Run has got this SEO thing nailed.)

June 11, 1935: Edwin Armstrong gives the first public demonstration of FM broadcasting in the United States. (We suspect it wasn’t “Free Bird” or “Stairway to Heaven.”)

June 11, 1936: The London International Surrealist Exhibition opens. (Q: How many surrealists does it take to change a lightbulb? A: Fish.)

June 13, 1971: The New York Times begins publication of The Pentagon Papers. (The mantle would be taken up by the Washington Post, as recounted in the 2017 Tom Hanks/Meryl Streep film The Post. See below.)

June 14, 1822: Charles Babbage proposes a difference engine in a paper to the Royal Astronomical Society.

June 15, 1752: Benjamin Franklin proves that lightning is electricity. (Check out the Lin-Manuel Miranda/Decemberists collaboration “Ben Franklin’s Song” originally written for an early version of Hamilton; song is a bit NSFW, by the way.)

June 15, 1878: To settle a bet, Eadweard Muybridge takes a series of still photographs to prove that all four of a horse’s hooves leave the ground when it runs. The results become the basis of motion pictures.

June 15, 1993: Adobe Systems initially releases the Portable Document Format (PDF). It was slow to catch on, but seems to have increased in popularity...

June 16, 1917: American publisher Katharine Graham. (As played by Meryl Streep in The Post. And if you’re in the Haverhill, Mass., area on June 30, stop by the Museum of Printing for a special screening of The Post with expert commentary on 1971 newspaper printing technology.)