I was recently given the opportunity to review a new book, Pioneers of German Graphic Design. Did you know that modern graphic design originated more than 100 years ago in Germany? I didn’t. The book is fascinating and includes fabulous imagery. I’ll recap some of it here, but you might want this one for your personal library!

One nice thing about being a journalist in the printing industry is that I sometimes receive pre-publication review copies for interesting books I never would have known about – nor likely, would you. The latest is a fabulous book about the history of graphic design in Germany. Pioneers of German Graphic Design (available now for pre-order on Amazon) tells the story of German graphic design in all its detail, from the late monarchy to the Wirtschaftswunder after World War II. The author, Jens Müller, explores the interrelationship between the groundbreaking early inventions of Germany's graphic design pioneers and the nation's explosive politics, shedding light not only on the development of the profession but on its international influence.

And it is illustrated with fabulous images like this one from 1927: 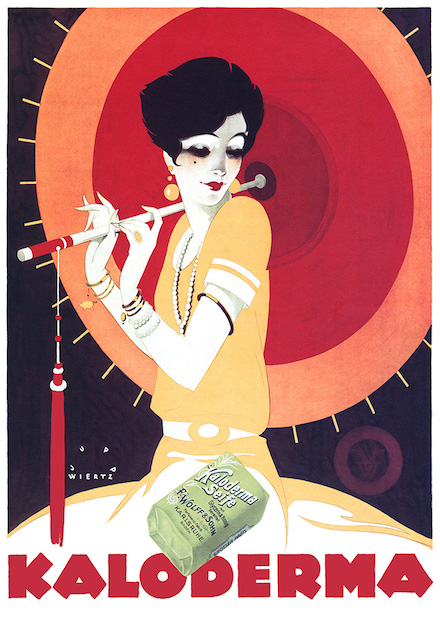 We think of the printing industry’s birth in Germany with Guttenberg’s moveable type, but who knew that modern graphic design came from there as well?

According to the research behind the book, the early 20th Century as the most significant period in the development of modern design, the birth of a new visual language. And it was also the beginning of corporate and graphic design as we know it today. As an example, Peter Behrens, artistic consultant to German electrical manufacturer AEG, devised an overall design concept for the company that included onto only printed materials but also buildings and products, creating the world’s first corporate identity – something we take for granted today. The modern corporate logo was also invented in Germany by Wilhelm Deffke and Karl Schulpig, according to the book.

The book takes us back to the 1800s to set the stage for the political and economic environment out of which all of this grew and discusses the drivers for design innovation. One interesting fact is that prior to 1848, the German government censored all printed materials, and until 1850, the State had a monopoly on printed advertising. Both laws were repealed, opening the marketplace to innovation. At the same time, long print runs at low cost were becoming available. (Funny how things change – now all we talk about is how to do short runs at low cost!) In 1877, more than 3,700 different newspapers and magazines were published, some with runs up to 400,000. And this spurred the birth of advertising agencies! By the turn of the century, full posters combining text and graphics were becoming the norm and independent graphic designers were taking advantage of the financial and creative opportunities this development offered. And, in fact, there was even an association – Verein der Plakatfreunde (Societ for Friends of the Poster) formed in Berlin in 1905, and it had its own journal.

Germany was also the home of the first professional associations for graphic designers and advertising professionals.

The story continues through World War I, the 1929 collapse of the New York Stock Exchange, the ultimate move into World War II, and the impact these events had on graphic design, all highly illustrated with examples from those times.

Post-World War II, Germany was heavily influenced by American graphic design developments, including the advertising commissioned to launch the VW Beetle to the American Market in 1959. This campaign is considered the birth of creative advertising, a genre that emphasizes originality but adds an unexpected twist and, frequently, humor. And American-style advertising began to have a larger influence in Germany and elsewhere.

Today, more than 200,000 people in Germany work in advertising and design.

Pioneers of German Graphic Design profiles 14 key early German graphic design professionals in depth with examples of their work, and it is interesting to see the progression of design strategies over the years. It also includes examples from other designers in its more than 400 pages. It’s positioned as a long-overdue reference work about the origins of a visual language that did more to change the way we perceive aesthetics than any other movement before or since.

This book would be a lovely addition to anyone’s library, and would make a fabulous holiday gift for any graphic designers in your circle!