More than 60 journalists from around the globe gathered in Würzburg, Germany, at KBA headquarters to begin celebrating with the company its 200th anniversary. The event theme is 200 years: Future needs an Origin. It was a unique experience and total pleasure to be part of this historic event, which included a factory tour and a formal gala at the local convention center. Read more.

Eric Vessels and I were in Würzburg, Germany, to join KBA in celebrating its 200th anniversary, quite an achievement and a historic event for our industry. We were joined by 60 journalists from around the globe at a special press conference the day before the official celebration kicked off.

We first heard from KBA’s CEO Claus Bolza-Schuenemann. He reminded us that in November 1814, the first newspaper was printed using machine power with a steam-powered cylinder press invented by Friedrich Koenig (The London Times), which was the first milestone in the company’s storied history. The company was founded by Koenig in 1817, with the world’s first printing press factory. As part of the press event, we toured the company’s museum and were able to see models of what some of these original presses looked like. This image shows a replica of what is known as the Sula press – it was a concept press that was the first to mechanize all the manual functions of a printing press except the insertion and removal of the paper. Lack of funds put an end to the project in 1804; but its innovations lived on. The inking unit invented by Koenig is the archetype for modern inking units. 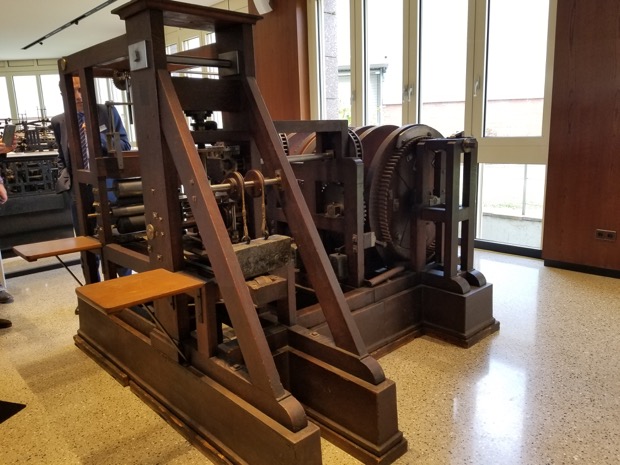 But by 1816, development had progressed to the first perfecting press, shown below. Based on the success of the press installed at the London Times, Koenig turned his creative energy to making a even more efficient press. The sheet, once fed into the press, was printed first on the smooth side and then turned by means of a tape arrangement to be fed in for printing on the reverse side. It operated at 1,000 sheets per hour!  Quite an achievement. 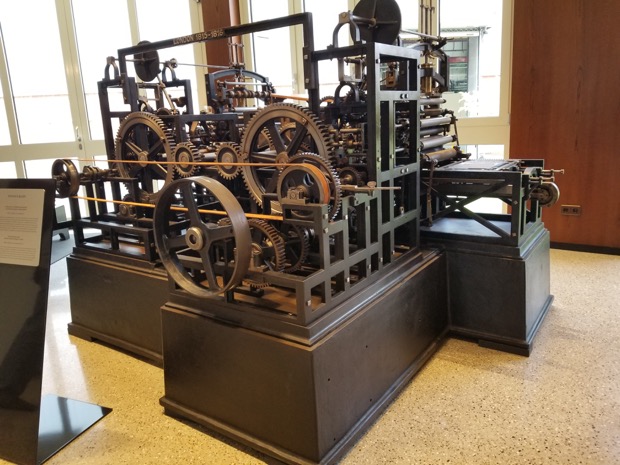 Bolza-Schünemann assumed a leadership role in the company in 1989, the sixth generation of the family to lead the company. By 1998, the company had reached sales of 1.6 billion Deutsche Mark, pretty well-positioned for the future. Since then, there have been some ups and downs, with 2017 sales projected to be 1,250 euro following the KBA’s significant restructuring in 2014.

The company has been known as KBA for some time, but in a Back to the Future move, it is returning to its roots, reestablishing the Koenig & Bauer name with a brand-new logo. It will take some time for the logo and the new corporate look to permeate everything, but by drupa 2020, it should all be completed. The ampersand in the middle will be used as a “short-form” logo when space does not permit the use of the full logo. The new tagline – we’re on it – reflects the company’s forward-looking vision and resolve to reach the next century mark profitably and still bringing innovation to the market.

We were honored to receive a copy of the commemorative book published on the occasion, representing the past, present and future of printing. The box it comes in is basically a folding carton. It contains three books: People, Machines and Ideas. The People book was inspired by direct encounters by the publisher with people at Koenig & Bauer. The Machines element is actually a collection of 13 large posters recounting the history of print, starting with the 1814 press used by the London Times and showing a replica of that newspaper back then. The Ideas book consists of 12 chapters looking ahead at the future of print. Quite a collectible. While he couldn’t be here with us, we made sure that a copy of this commemorative piece would be provided to Frank Romano for his Museum of Printing. 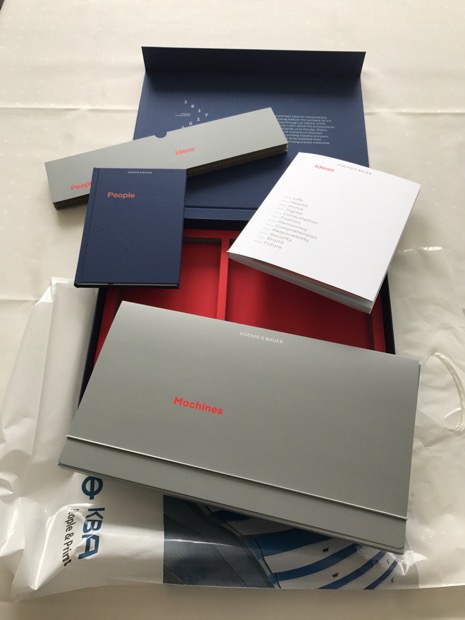 I especially liked this clever graphic, which was prominent throughout the event. 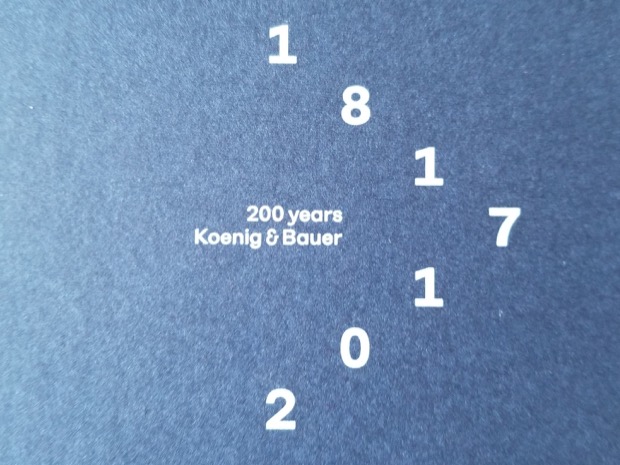 In 2016, Koenig & Bauer achieved the best profitability in its history. Dr. Mathias Dähn, the company’s CFO (pictured below right with Bolza-Schünemann (center) and Klaus Schmidt, Director of Marketing and Communication), pointed out that Koenig & Bauer did not want to wait another 199 years to achieve its next best profitability, and as such, the company has put into place rigorous corporate governance to hopefully ensure ongoing levels of good profitability and growth. Growth is now a central pillar of the company’s endeavors, and all its businesses must contribute to that growth. 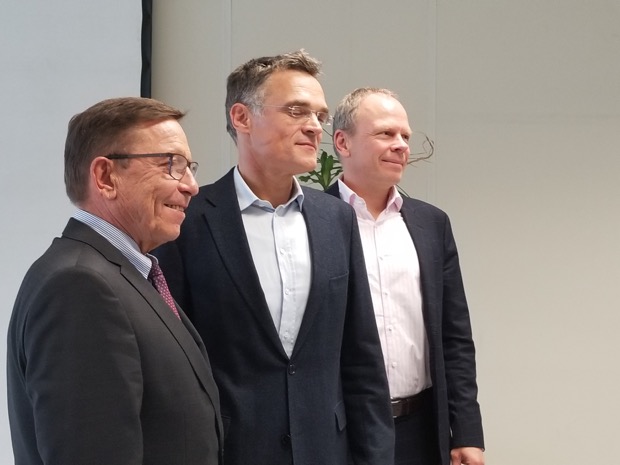 As a historically analog company, Koenig & Bauer has not rested on its laurels as far as digital is concerned. The company does not see digital printing technologies as any kind of threat to its business, but rather as complementary; and has taken the appropriate steps to build a blended analog/digital portfolio. This is both with internal development and in partnership with others, such as its partnership with HP in the development of the HP T1100S, the world’s largest inkjet printing press designed for pre-printing of corrugated liners, and the KBA RotaJET, originally developed in partnership with RR Donnelley. Many of our readers may not be aware that Koenig & Bauer also offers printing solutions for metal and glass decorating, including the MetalDecojet, a digital press for metal decorating, launched earlier this year, and its presses print the majority of currency worldwide.

It was exciting to see the new look for KBA equipment during our plant tour, reflected in the RotaJET. Notice the backlit logo and a backlit green bar (next to the logo, unfortunately shows up as white in the image) that indicates the press is ready to go. Very sleek and modern. Bolza-Schünemann described the new branding as going back to the company’s roots but with a modern design, positioning the company for the future but with respect for the past. 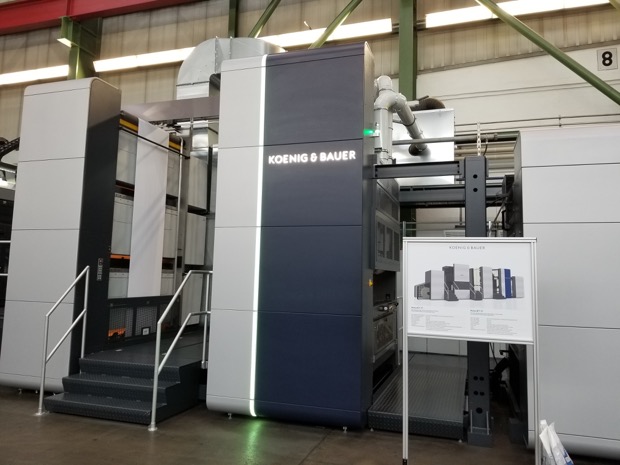 Today the Koenig & Bauer AG has 33 subsidiaries. Twelve of the companies manufacture products for their own companies. This makes a consistent brand presence more difficult. In the future, likely by drupa 2020, the group will be represented worldwide with all products and services under the new umbrella brand.

During our tour, we also saw the site of the brand-new demo center at the Würzburg headquarters, which will see arrival of its first equipment at the end of this year. The event concluded with a formal gala at the local convention center.

Despite the busy schedule, we were able to speak with Bolza-Schünemann on video as he spoke about the company’s new branding and what it represents for Koenig & Bauer, its customers, and the industry at large.