An Eye for Detail: The Many Layers of Digital Artist Bert Monroy

“If you’re in a museum and you’re looking at a piece and someone comes up and stands next to you, you feel like you should move, your concentration is disrupted. With my work, I want people to stop, stay, and look around.”

Berkeley, Calif.-based digital artist Bert Monroy has built a reputation for photorealistic works that are panoramic, as well as seemingly infinitely detailed. On his website, when viewing works such as “Times Square” and “Amsterdam Mist”, you can zoom in to reveal layers upon layers of detail, all painstakingly hand-drawn.

“Growing up in New York, I saw a lot of great architecture, but people walk around with tunnel vision, not looking up,” said Monroy. “With my paintings, people stop and look.”

A print of Monroy’s “Times Square” is now part of a new exhibit at the Computer History Museum in Mountain View, Calif. Called “Make Software: Change the World!” the exhibit looks at the history and cultural impact of seven technology milestones: MP3, Photoshop, MRI, car crash simulation, Wikipedia, texting, and World of Warcraft. “Over the last decade, software has come to form an intimate part of the fabric of modern life,” said Kirsten Tashev, VP of Collections and Exhibitions at the Computer History Museum. “From birth to death, software is there mediating our human experience as beings in a virtual as well as physical world.” The exhibit also features “Trees” by digital artist Steven Johnson. The “Make Software” exhibit opened in January 2017 and will run for at least five years, said Tashev.

Monroy’s work, part of the Adobe Photoshop retrospective, is a 22-foot-long and four-foot-high backlit display printed on an Epson SureColor P20000.

Using Monroy’s work to illustrate the history and impact of Photoshop is apt; although he came from a traditional art and design background, Monroy was at the dawn of both desktop publishing and digital art. “I was in advertising for many years,” he said. “In 1984, I had a small ad agency in New York, and my partner said that we had to computerize. There was a new computer coming out that he said I could do my layouts on.” That was the original Macintosh, which he experimented with at a local computer store before the agency’s units arrived. He was immediately drawn to MacPaint, and was noodling around with it when he clicked something by accident. “Something happened on screen,” he said. “There were suddenly all these big black boxes. The technician said, ‘You zoomed in to the pixel level.’ And then, something clicked. I said, ‘This is it, this is my medium.’” Thus began Monroy’s eye for digital detail. 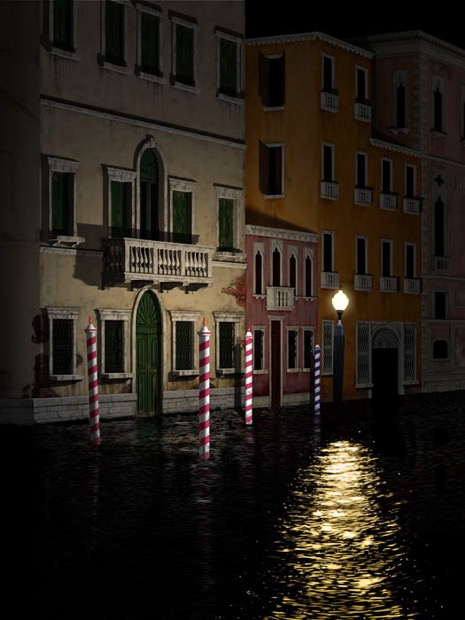 He soon quit the agency and started a business around computer illustration on the Mac, and eagerly adopted each new software and hardware milestone, especially Illustrator, whose Bézier curve-based vector graphics made his work scalable.

“A whole industry was starting to be born,” said Monroy. “I became the art director for the first newsletter for the New York Mac Users Group, and I was doing art for the cover and illustrations. There was a lot of call for that kind of work.”

The next big milestone was a product called Image Studio, he said. “You could take photos and manipulate them,” said Monroy. “It was a wonderful product for what it did.” Color Studio soon followed. The two developers who created Image Studio and Color Studio for Letraset would go on to found Fractal Design, which then introduced the wonderful Painter. Painter is still around and is now in Corel’s hands.

But in 1990, a new application appeared that changed everything—and not only for Monroy. “We had had desktop publishing, but it was Photoshop that turned ad agencies and other companies digital,” he said. “Everything started changing after that.”

Monroy wrote some of the first books about Photoshop, and alongside his more commercial work, he pursued digital art. Like many artists who were at the vanguard of the digital art movement, there was a lot of resistance from the traditional art world.

“There was an art show in New York and Epson had a booth in which I was displaying my paintings and large canvasses,” said Monroy “One gallery owner came over and said, ‘This stuff is fantastic, beautiful. What are the originals, oils?’ When I said it was digital, he just turned and walked away. As far as the art world was concerned, the mentality was, ‘That’s not art. The computer is doing all the work.’”

It’s taken a long time for the art world to recognize digital as a legitimate medium.

As new versions of Photoshop were released—and new computers had the horsepower to process bigger and bigger images—Monroy’s canvasses grew larger. And then a hardware introduction changed the way he drew. “When the Wacom Cintiq was developed, I could work directly on the screen,” he said. The Cintiq was (and still is) a tablet/screen drawing system that allows users to draw directly on the display surface with a stylus that responds to pressure and drawing angle, much like a real pen or brush. “I started holding the stylus like you hold a brush,” said Monroy. “It was back to the way I was originally trained. I had gone full circle.”

It was only advanced technology that could allow him to tackle an ambitious project like “Times Square.” “I always wanted to paint Times Square,” he said. “I did all kinds of sketches, and the only way to do it was big, like Times Square itself.” He began drawing shapes and plotting perspective lines, and assembling the various pieces of the image from photographs and sketches, meticulously re-drawing them directly on the screen. Each piece of the image was a separate file, and all the pieces were combined in Photoshop. All told, “Times Square” consists of around 750,000 individual layers, and the file is 6.52 gigabytes flattened. Unflattened, there is close to 200 gigs of imagery. Amidst the detail are friends and family, other Monroy paintings, and other artifacts from his own life.

Monroy had made several trips to Times Square itself to gather source material for the painting, but one new technology has allowed him to paint virtually any place in the world.

“The piece I’m working on now is a scene in Paris,” he said, “but I can’t just pack up and go to Paris, so I’m relying on Google Street View. I go to that spot, ‘walk’ up and down the street, look at exactly what I’m trying to paint, and take a screen shot of it.” He first seized on Google Street View when working on “Amsterdam Mist.” “My inspiration was a shot I had taken some time ago,” he said. “Because it was so foggy, I couldn’t see any detail, so by walking up and down the street virtually, I could see what things really looked like. You can paint any city without leaving your studio.” 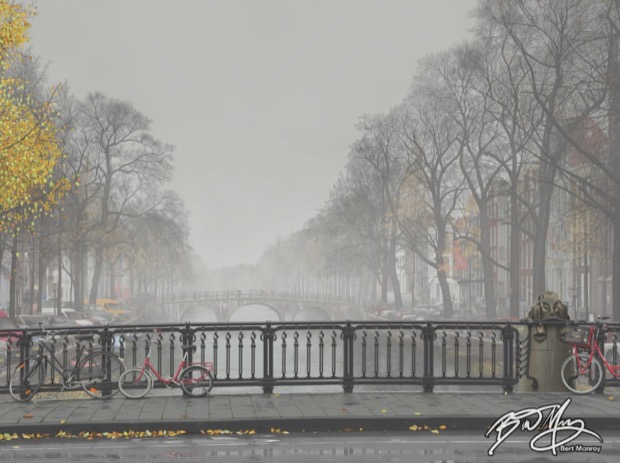 Given the level of detail that Monroy puts into his paintings, can prints accurately reproduce it all? “The printers will pick up all that detail,” he said. Monroy often prints as he is developing a piece to see how much detail his printers—two Epsons, a 17-inch Stylus Pro 3800 and a 44-inch Stylus Pro 9800—can manage. He has yet to be disappointed. “In ‘Times Square,’ there’s a motorcycle on the street that actually belongs to an old friend of mine,” he said. “It’s really detailed and I wanted to print it to see what detail I’m losing. I didn’t lose anything. The stores down Broadway suddenly would have legible signs. The printers were picking up all the detail I was creating.”

Technology is still changing the way Monroy works, especially the way he sketches ideas. “I used to use ink on paper,” he said. “If I’m in bed and get an idea, I had a pad and pencil by the bed, but now I use the iPad.” Drawing on the iPad also makes it easy for him to transfer the sketch to the computer using AirDrop.

So if you find yourself in Mountain View, you can see “Times Square” in person. “We chose ‘Times Square’ first and foremost because it was beautiful,” said the museum’s Tashev. “Secondarily, but no less important, is the technical mastery behind this work. Not only would visitors see a stunning 22-foot-long work of art; they would also be experiencing the largest and most complex Photoshop painting ever produced.

“As an example of what software can do in the hands of a highly skilled user, it was perfect.”