A Toast—and Another One—to the Genius of Corrugated

Corrugated packaging protects effectively, presents handsomely, and succeeds environmentally. What’s not to like or to give credit where due? 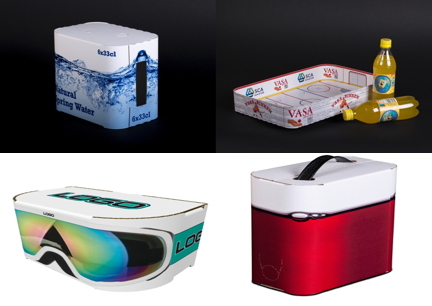 Lately, corrugated board for packaging has been attracting a lot of attention from the production angle thanks to the emergence of new solutions for printing directly on it or on the top liner that is laminated to it as a step in the converting process. But, corrugated’s other plusses for packaging have drawn notice of their own as new applications continue to show just how dependable and versatile a material it can be.

For example, the Fibre Box Association (FBA) cites recent scientific research indicating that corrugated containers keep fruit fresher and safer to eat than reusable plastic containers (RPCs), an alternative to corrugated for shipping. The research, conducted in Europe, showed that corrugated was better than plastic at impeding the spread of microbes that spoil produce and make people sick.

Scientists at the University of Bologna deliberately contaminated corrugated trays and RPCs with identical microorganisms, packed the containers with washed and sterilized peaches, and waited. The results were striking.

Transfer of microbes from container to contents occurred in both types of packaging, but with corrugated, it took place more slowly and with less harm to the fruit. Fruit in the plastic crates became contaminated to spoilage level 48 to 72 hours sooner than the fruit in the corrugated trays. The E.coli contamination level of the peaches stored at high temperatures in the corrugated trays never exceeded 25%, whereas almost all (95%) of the fruit in the RPCs became contaminated after 48 hours in the same conditions.

The research underscores corrugated’s advantages both for food safety and for packaging efficiency, according to the FBA. “The ability of corrugated packaging to increase shelf-life could translate into significantly reduced shrink and potentially millions of dollars in savings for retailers,” said Dennis Colley, the group’s president and CEO.

Colley also is the executive director of the Corrugated Packaging Alliance (CPA), and in that capacity, he recently pushed back against a challenge to another of corrugated’s virtues: its environmental friendliness.

He was reacting to a new study by IFCO, a supplier of reusable packaging solutions, which declared that RPCs are more environmentally sustainable than corrugated boxes in seven key categories.

The study was based on a peer-reviewed life cycle analysis (LCA) of the two types of containers. Stated in it are claims that compared with corrugated boxes for shipping fresh produce, RPCs produce 30% lower CO2 emissions; generate 85% less solid waste; consume 35% less energy; and create significantly smaller percentages of environmental pollution.

Colley zeroed in on the data point about CO2. It is inaccurate, he said, because it is based on an outdated and incorrect baseline assumption of 15% recycled content for corrugated containers. The Corrugated Packaging Alliance maintains that because the actual average recycled content is about 50%, it gives corrugated a nearly 40% advantage over RPCs for CO2 emissions and global warming potential (GWP).

The group expects to publish its own LCA for corrugated in October, its third such study. The one from 2014 reported a 32% reduction in GWP compared with the findings of the first corrugated industry LCA in 2009. According to the 2014 report, the good news included double-digit declines in indicators for eutrophication (a form of water pollution), respiratory problems, and fossil fuel depletion.

All the while, increasing amounts of corrugated have been entering the waste recovery stream for recycling. Tracking the progress is the American Forest & Paper Association (AF&PA), which says that the recovery of old corrugated containers (OCC) and unbleached Kraft papers has been rising steadily since the 1990s. According to AF&PA, the U.S. Environmental Protection Agency (EPA) recognizes OCC recovery to be higher than any other material in the municipal waste stream.

AF&PA says that slightly more than half of the OCC recovered in 2015 was used to make new containerboard for more corrugated boxes. These included an average of 50% percent recycled material (as asserted in CPA’s response to the comparative LCA from IFCO). The rest went into boxboard for items like cereal packages or was exported.

Corrugated’s rising reputation for eco-friendliness bodes well for growing its share of the packaging market. Technavio, a market research firm, notes that one reason for the increasing use of corrugated boxes is the fact that their paper can be recycled up to seven times more than other packaging materials.

While all of these metrics speak strongly in favor of corrugated as a packaging medium, they’re a bit dry, and they don’t hint at the creative uses to which the tried-and-true material is being put. But, examples of such applications aren’t difficult to find. 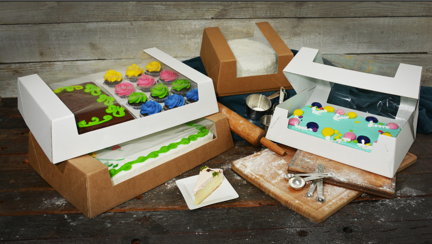 Anyone who has ever dinged the frosting of a birthday cake on the trip home from the bakery knows that the average cake box is thin armor against accidental damage. Inno-Pak, a supplier of flexible plastic and rigid paperboard packaging to the grocery and food service industries, believes it has the answer: the Inno-Pak Visions Cake Carton, made of corrugated with a clear plastic window. The box is said to be durable, stackable, and capable of doing its job with zero damage to the baked goods inside.

Like most corrugated boxes, the Inno-Pak Visions Cake Carton is square-cornered. But, no law says that corrugated containers must consist of nothing but 90º angles.

At drupa, SCA Forest Products AB proved it by presenting Arcwise, a packaging concept for producing curved containers with conventional corrugated equipment. Arcwise packages ship flat for printing and diecutting in the usual ways. They achieve their distinctive curved look when erected and filled with product. SCA says that the rounded corners of the wraparound packaging gives it high stability and stacking strength as well as untapped design potential. 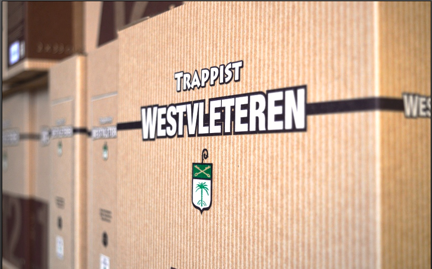 Blessed by brothers: VPK Packaging Group’s corrugated carrier for “the best beer in the world”

What better way to salute the genius of corrugated than with a toast of the best beer in the world? That is the accolade that many aficionados have bestowed upon Westvleteren 12, a quadrupel-style Belgian ale brewed by a small community of Trappist monks at the Saint Sixtus Abbey in that country. The corrugated connection comes from the VPK Packaging Group, which designed and produced a new corrugated box specifically for transporting the precious—and highly breakable—bottles.

Since beer lovers often travel from far and wide to obtain Westvleteren 12 at the source, the container had to be sturdy enough to protect the bottles—six to a box—on the long journeys home. VPK accomplishes this with corrugated inserts that reinforce the box and hold the bottles safely in place. The boxes, says VPK, are stackable, and their built-in handles make them easy to carry.

In Belgium, when Flemish-speaking people want to toast something, they say Santé! and raise their glasses twice. Corrugated deserves—and finally is getting—just this kind of dual recognition for the protection it affords and the creative possibilities it opens up.