Metzgers of Ohio Hosts Pre-drupa Event for RMGT of Japan

Nobody ever said that the sheetfed offset equipment market is easy to do business in. But RMGT, a partnership between two of Japan’s best known press manufacturers, thinks it has what it takes to make the most of the opportunities that the market still holds. 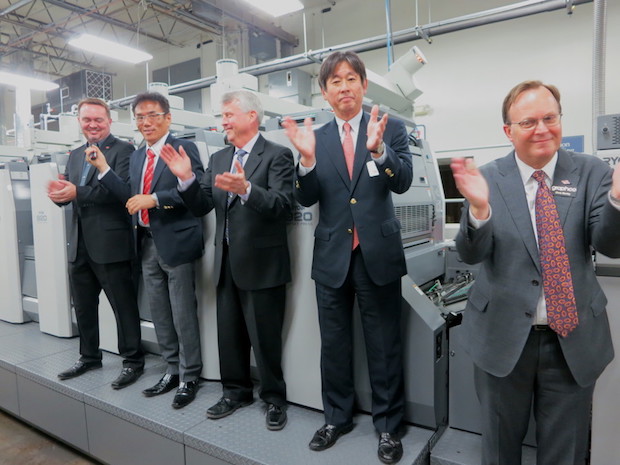 The Japanese press manufacturer known as RMGT occupies a potentially rewarding place in the graphic equipment market. At first glance, though, the position it’s in might look more like a predicament than an opportunity.

RMGT sells mostly sheetfed offset equipment, a category with its best years of market performance behind it. The biggest chunks of the North American sheetfed market belong to two well entrenched German rivals. And then there’s the challenge of selling equipment in this flat environment under a relatively new brand name (even though the companies that combined to form RMGT were well known and highly regarded).

But, RMGT believes that it has a great deal going for it even in these challenging circumstances and that printers, once they get to know the brand a bit better, will be inclined to agree. The confidence comes from three things: competitive pricing and the promise of a lower cost of press ownership; a claimed technical lead over other manufacturers in LED UV, an advanced drying technology; and a belief in a deferred but now emerging demand for versatile, reliable, and affordable offset equipment.

To share this three-part message with their North American customers, top executives of RMGT traveled from Hiroshima, Japan to Toledo, Ohio for a pre-drupa review of what the company will showcase at the international event. Hosting the May 10 briefing for RMGT in Toledo was Metzgers, a customer that has helped the manufacturer plant its flag in the North American market by installing the largest and most extensively equipped version of RMGT’s eight-page offset press.

The arrangement became official in January 2014. Today, said Yuzuru Ichimasa, president of RMGT, “profit is very solid,” and sales in North America are strong: three times greater in the venture’s second year than what they were in the first. In the last 12 months, he said, RMGT has sold more than 30 presses comprising more than 150 printing units in the U.S. and Canada.

Responsible for many of the placements is Graphic Systems North America (GSNA), a network of six U.S. and Canadian print equipment dealerships that act as exclusive distributors of RMGT presses in sheet sizes up to 25" x 36". Another dealer, RM Machinery (RMM), handles RMGT’s 28" x 40", 29 "x 41," and 32" x 44" machines.

Representing the line at the RMGT stand in Hall 16 at drupa will be an eight-color convertible perfector from the company’s 9 Series of eight-up platforms; and a straight printing, six-color 10 Series press in a 40" format with a coater and a heavy-stock option for packaging. Both will have LED UV units for instant curing and an onboard camera inspection system for quality monitoring. The 9 Series press will feature automated plate changing and makeready. Also to be shown is the RMGT DP7, a six-up, liquid toner digital offset press developed jointly with Miyakoshi Printing Machinery and first seen in prototype at drupa 2012.

In operation since late last year, the new Series 9 press at Metzgers is packed with the assets that RMGT will promote at drupa 2016. Designated 9210P, the 5/5 long perfector is the first Series 9 press to be installed in North America with 10 printing units. An eight-up machine by virtue of its 25" x 36" sheet size, the 9210P perfects at 13,000 sheets per hour and prints one side at 16,200 sph. Its engineering refinements include makeready automation; fully automatic sequential plate changing; double-diameter, stainless steel impression and transfer cylinders; an anilox coater; a heavy-duty Mitsubishi feeder; and automatic blanket and impression cylinder washup. 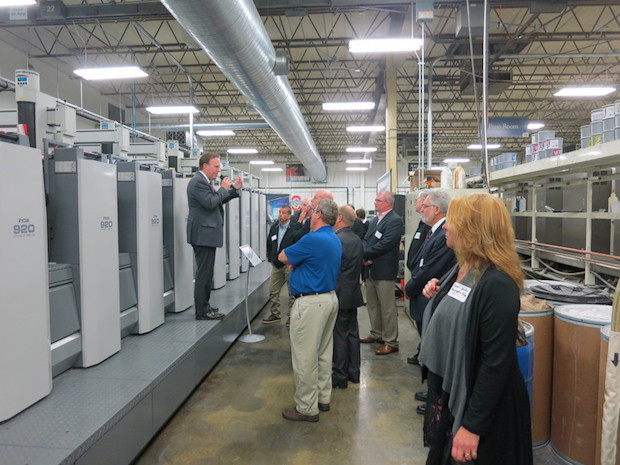 The RMGT 9210P at Metzgers is an eight-up, 5/5 long perfector featuring LED UV.

One of the 9210P’s most distinctive features is its triple drying system, consisting of strategically placed LED UV, conventional UV, and IR units that leave sheets fully dry on both sides when they enter the delivery. So efficient is the drying setup that so far, there has been no need for Metzgers to use the press’s offset spray powder dispenser.

RMGT sees LED UV as a key point of differentiation for the product line. Twenty-one RMGT presses installed in North America have it; the company has made 165 such placements worldwide. Ryobi was an early entrant into the field, having equipped its first presses with LED UV technology from Panasonic in 2008. RMGT believes that this pioneering embrace has given it an eight-year head start on press manufacturers coming to the technology only more recently.

LED UV uses light emitting diodes instead of conventional UV lamps to cure compatibly  formulated inks and coatings. Compared with standard UV lamps, instant-on/off LED arrays consume less power (up to 80% less, according to RMGT), operate at cooler temperatures, and last longer. In the 9210P at Metzgers, a limitation of LED UV—the fact that it does not have as many compatible inks and coatings to work with as conventional UV—is overcome by combining both types of exposure with IR for one-pass curing with all kinds of fluids and substrates.

This flexibility and the all-around versatility of the 9210P are what cemented Metzgers’ decision to invest in it. “We wanted to be one of the frontrunners in LED UV,” said Tom Metzger, CEO. With LED UV, he said, it’s possible to take fully cured signatures straight from the delivery to the bindery and turn around a 32-page book or a 64-page magazine “in one day.” Metzger said he foresees a rising demand for jobs with the kinds of value-adding coatings and special effects that the 9210P’s multi-capable drying system is designed for.

Because of the way the machine is configured, Metzger said, “we think of it as many different presses”: one that can run 2/2, 4/4, 5/5, or straight in formats from 12" x 18" all the way to eight-up. In the full size, it’s more cost efficient for the company’s signature-based magazine work than an eight-up 40" press would have been. With its 53' footprint, it’s also more compact—an advantage that can be seen in the fact that the 10-unit 9210P takes up no more linear space in the pressroom than the 40" Mitsubishi six-color machine sitting next to it.

The practical appeal doesn't end there. Although the 9210P isn’t designed primarily for packaging, its ability to print thick stocks is one that Metzger intends to exploit in pursuit of that market. In anticipation of the work, he has installed the press on an 8" concrete slab to accommodate the extra pile height of packaging stocks in the feeder.

For RMGT, the 9210P at Metzgers represents all of the competitive advantages it believes it can have in a resurgent market for offset printing equipment.

Chris Manley, who sells RMGT presses in the Midwest as president of Graphco (part of the GSNA dealer network), noted that for about five years after the 2007-2008 recession, there was “very constricted investment” in offset as many printers—including Metzgers—put their money into lower-priced digital devices. Now, however, these printers are realizing that their offset presses—responsible, according to Manley, for 80% of the revenue in most shops with both capabilities—are in need of competitive upgrading. 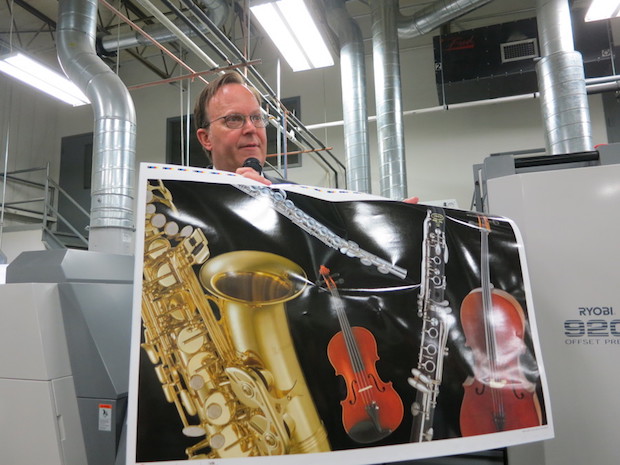 According to Ichimasa, RMGT is well positioned to attract printers “coming back to offset” with presses that can deliver offset quality in digital quantities. The combined technical strengths of Ryobi and Mitsubishi give RMGT an edge against other offset manufacturers trying to accomplish the same thing, he said. Ichimasa welcomes his rivals’ late-blooming interest in LED UV since it expands a market where RMGT is already solidly established.

Pricing also will be used to competitive advantage. For example, RMGT is positioning the Series 9 presses as equipment that delivers eight-up printing at a six-up press price: 40% less expensive to buy than a 40" machine, and correspondingly less expensive to operate because of the smaller format size and the energy cost savings from LED UV.

All of these strengths arise from the harmonious coming-together of Ryobi and Mitsubishi since the merger took effect, Ichimasa said. He described the companies as neighbors located no farther apart in Japan than Toledo is from Detroit in the U.S.—a drive of less than an hour. Because they were based in the Hiroshima region, he said, “they were not city boys”: grounded in one of Japan’s principal industrial centers, but outside the megalopolitan orbit of Tokyo.

This meant that they shared a culture, a dialect, and a loyalty to Hiroshima Toyo Carp, the region’s big-league baseball team. They dealt with many of the same vendors, and Ryobi even manufactured components for Mitsubishi prior to the merger.

All of the ingredients for a successful integration were in place when the companies decided to join forces, according to Ichimasa. “It was like a marriage between neighbors since childhood,” he said.