Senior Editor Cary Sherburne has been a long-time customer of Zazzle and was thrilled with the recent opportunity to visit the company’s manufacturing sites in San Jose CA. Learn more about the successful business this unique company has built in this article sponsored by HP. 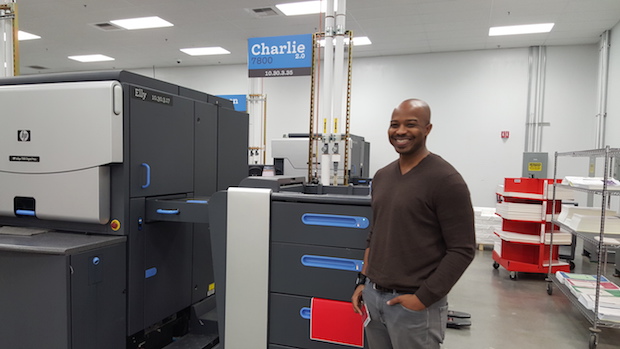 Zazzle, based in San Jose, California, calls itself “The Make Engine,” saying, “We believe that dreams should be indulged, ideas explored and inner creators set free!” The company’s mission is to give anyone anywhere the power to make anything imaginable. Quite a statement! But when you visit Zazzle.com or have the opportunity to tour its two plants (one focused on paper and the other primarily on textiles), the extent of their ability to bring this to life is very impressive.

Just about everything available at Zazzle.com can be customized. Chief Fulfillment Officer Charles Ohiaeri says, “We are passionate about giving our customers the ability to make their mark on the world through customization, and we believe there is no limit to self-expression.” The company produces everything from apparel and paper goods to fabric and food. If you don’t see something you like, you can upload your own designs and ideas, whether it is for a T-Shirt, messenger bag, keepsake pillow, wrapping paper or just about anything else you can think of.

The company was launched in 2005 as an ecommerce provider and used small color printers to produce its work. “We quickly outgrew their capacity and capabilities,” Ohiaeri comments. “And we began a search for a partner who could take us to the next level, and the next, and the next.”

Zazzle was an early user of the HP DesignJet 5000 Printers, using them to make T-Shirts, posters and fine art prints. “Our DesignJet success paved the way for bringing in HP Indigos for our paper-oriented business,” Ohiaeri explains. “After significant due diligence, we acquired an HP Indigo 3050 Digital Press, and that was the beginning of amazing growth.”

As the paper business continued to grow, Zazzle added to its Indigo portfolio and currently runs a total of seven HP Indigo digital presses.  In an interesting twist, Zazzle has given names to all of its Indigo presses. Ohiaeri says, “No one really cares if a machine is down, but they care about kids. So we have named each and every one of our presses, and they are like our kids.” Beebe was the first press, Charlie (named after Ohiaeri) was next, and the naming has progressed through the alphabet to Ingrid and Joaquin, the company’s twin HP Indigo 10000 Digital Presses.

Charlie (the press) is actually in its second generation. Ohiaeri comments, “When the original Charlie was replaced, its replacement was also named Charlie.  I suppose we will continue to have a Charlie on the floor as long as I am here, or perhaps beyond.” Ohiaeri has been at Zazzle for 13 years and has no plans to move on, so it is likely there will be another Charlie on the floor in the future!

Zazzle installed one of the first HP Indigo 10000s, and Ohiaeri says, “This press is a testament to HP as a company and their investment in listening to customers and delivering products that check all the boxes. This press blows you away with its quality, capabilities and speed. We installed Ingrid first, and learned a great deal about the press, so that Joaquin hit the ground running.”

Another aspect of its relationship with HP that is important to Zazzle is Dscoop, HP’s digital printing users group. “The first time I attended,” Ohiaeri reports, “I was floored by how open with each other everyone was, even though many are competitors. It is a truly amazing community, run by very talented users, and gets better every year.  It’s a great contribution to the printing industry.” Zazzle will certainly have representatives at this year’s Dscoop conference in San Antonio in April to stay current on what’s new as well as to network with peers. “You always come away with new things to do and think about,” he says. Our guess is that many attendees will come away from good ideas from Ohiaeri as well!

While the hardware is important to Zazzle’s operation, so is the software. “We process thousands of orders a week,” Ohiaeri explains. “And many of them are small, maybe one or two customized items. We need an automated workflow that operates without a hitch, and we are able to use the HP SmartStream Suite as a key element in that workflow, including mega use of Designer and Composer, as well as Production Analyzer, to make it all happen.”

Zazzle was an early adopter of SmartStream Designer and Composer, and uses it for a variety of applications. “It’s a faster way to build and plan jobs for wrapping paper, as an example,” Ohiaeri says, “and we produce that on our HP Latex 3000 Printer and our fleet of DesignJet printers. In one case, we had a few hundred-thousand feet of wrapping paper to produce in a short timeframe. We had the old version of SmartStream Composer on an older server, but it still cranked. That inspired confidence in me that the new version on an updated server would play even better.”

Zazzle’s fleet of Indigos has also opened up another unique opportunity – the company is authorized by the United States Postal Service to print customized postage stamps! “With the form factor of stamps and the large sheet size,” Ohiaeri says, “you can imagine that we have massive permutations in each run. Our HP presses and software help us keep those jobs running through the plant flawlessly. We are also using HP SmartStream Mosaic internally for customized backgrounds on letterhead and other internal communications, and we are looking at how we might use it on behalf of our customers.”

The future is bright at Zazzle as the team applies their creativity to making the most of that of their customers. Already, exciting new applications for home décor and other uses are in planning stages, and the company looks forward to continued double-digit growth and an intimate partnership with HP.