In this two-part article, David looks at Landa, the Nanographic Printing® technology, including additional new developments and offerings in preparation for drupa 2016.

It was almost 4 years ago that Benny Landa excited the crowds at drupa 2012 with his latest venture, Landa Digital Printing, a company focused on a new printing technology called Nanography. For those of you who are not familiar with Benny Landa, he unveiled the first digital press in 1993, launched Indigo in 1997, and subsequently sold the company to HP in 2001. After selling Indigo to HP, Benny changed his focus to research in nanotechnology and how it might be used for energy creation. As a result of some of his research, and his background in print technologies and processes, he realized that he could also design a printing process using nanotechnology. From there, he began development in earnest with the goal of creating a digital printing process and press that could ultimately replace offset printing with equal or better quality and efficiency, and meeting the cost bar set by offset for longer runs.

Since this new development is a production inkjet technology at its core, albeit a unique approach, he chose drupa 2012 as the venue for introduction. It was undoubtedly the right place and the right time. The crowds were excited, and an estimated 400 businesses lined up to purchase a letter of intent for the first batch of presses that would come off the production line. At that time, I wrote a little about the announcement here and here, but held off until more details were available.

The presses shown at that event, based on this new technology, were expected to begin shipping within 18 of the event, although that never happened. The Landa team realized that this was going to be a much bigger effort than any of the very experienced team expected. Ultimately there was a big spread between the concept and the execution. They realized that when you are pushing the envelope on material science, data rates, jetting rates, speed, quality, etc., there are a lot of moving parts that need to be addressed. So instead of shipping product, they went back to the labs in Rehovot, Israel, to address outstanding issues and use the feedback they received at drupa and subsequent visits to about 150 printing businesses around the world to refine the functional design. Between then and now, Landa Digital Print has also taken on another investor, the Altana Group, to help both financially and technically. While the basic technology that will be shown at drupa 2016 is still the same as it was at drupa 2012, there have been many changes to the products over the last four years, and there is a lot more to talk about now.

Since this is the core of the press technology, it is the best place to start. If you have been following my writings on Production Inkjet, you know that there are significant obstacles to overcome in order to reach the ultimate goal of offset replacement. Probably the most challenging is getting ink to adhere to, and sit on the top surface of the media. Of course, the main problem is that inkjet inks have a liquid carrier component, whether they are water or solvent-based. To date, we have seen press manufacturers primarily focus on preparing the media, either through treatment at media manufacturing or pre-treatment as a flood or spot coat inline with the print engine. Or in the case of solvent inks, they are using UV light and/or heat to evaporate the liquids and quickly set the ink on the media.

The other issue is speed, especially for sheetfed printing. Currently, the fastest sheetfed production inkjet presses can reach approximately 2700 sheets per hour, as in the case of the Fujifilm JetPress 720S in quality mode (covered in a future article). The challenge here is all of the cut sheet production inkjet presses currently in the market spray drops of ink directly on the surface of the media as it passes by the heads. First of all, imagine trying to get drops of water to an fall on an exact spot on moving media. Especially when those drops are very light, and there is an airflow created between the moving media and the printheads. And if you add the air pushed by the front edge of each sheet to that mix, you can see it is even more complex with cut sheet than trying to do it on a web of paper. Additionally, when the wet ink lands on the paper it gets absorbed into the paper, which affects print quality and drying.

The Landa Nanographic Printing® process was designed to address those issues, and it does it in a very creative way. It starts with a specially designed version of the Fujifilm Dimatix SAMBATM piezoelectric drop on demand (DoD) printheads. Fujifilm’s MEMS manufacturing technology allows the head to achieve resolutions of 1,200 x 1,200 dpi with 4 levels of grey scale. As a refresher, MEMS is a general term that refers to technologies that are used to create three-dimensional electronic and mechanical structures on silicon substrates on the micrometer level, and to manufacture a variety of parts using such technologies. By applying these technologies and parts to inkjet heads, it becomes possible to arrange high precision inkjet nozzles that perform with great accuracy and density, and to manufacture inkjet heads that are both mechanically and chemically stable. The Fujifilm Dimatix heads deliver a minimum dot size of 2 picoliters, which makes for a much smoother looking offset-like print. The anticipated life of the heads is currently rated at two or more years; they will probably exceed this, but it’s a little too early to tell. Other manufacturers use versions of the SAMBA printheads in their imaging systems, including Fujifilm and Heidelberg Fire, but that is where any similarity in the imaging process ends.

The ink for this process was developed and is manufactured in Israel by Landa Digital Printing and will be shipped in a concentrated form to reduce packaging and shipping costs. While most of the inkjet manufacturers use nano grinds of pigment in their inks at this point, Landa explains the unique qualities and advantages of Landa NanoInk®. “In the course of a decade of research, Landa observed that ink pigments, when reduced to narrow distributions in the nanometric scale, become unusually powerful colorants. On the basis of this discovery, NanoInk colorants are used at the core of the Landa Nanographic Printing® process. Landa NanoInk contains ultra-small pigment particles in that are tens of nanometers in size. In comparison, good quality offset inks have a particle size of approximately 500 nm — at least ten times larger. NanoInk is water-based and ecofriendly.”

Landa will manufacture sheet-fed presses configured with four colors (CMYK) with a gamut that achieves about 80% of the Pantone® range. It can be configured with up to seven colors (CMYKOGB) which achieves about 93% of the Pantonerange. The W10 web press will have a white ink option, bringing the total to eight colors for this press. The Nanographic prints are deinkable according to the INGEDE German standard. Since one of the areas of focus for the technology is packaging, Landa made sure the inks meet FDA and EU regulations for food contact (indirect) , and the BRC/IOP Global Standard for Packaging and Packaging Materials, amongst others.

Landa uses a unique imaging approach, jetting the ink onto a heated transfer blanket, drying the ink on the blanket and then transferring the dried image to the media. Yes… it sounds like offset printing. Actually, this offset process with digital printing is something Landa is fairly familiar with, since it is at the core of the imaging model of the original Indigo design. By jetting the ink onto the specially designed transfer blanket, he is able to overcome the biggest issues I described: the inability of inkjet’s adherence of the ink to a variety of media surfaces, and the speed constraints experienced by the other cut sheet production inkjet vendors.

The process is simple to understand but, as he found, much more difficult to engineer. First, each ink color is ejected onto the heated conveyor transfer blanket. Drying by means of hot air removes all of the water and leaves an ultra-thin (500 nanometers) dry polymeric film of the image to be printed. And by  ejecting it on to a continuous conveyor, it overcomes the issues of air turbulence created by the moving media, allowing for increased print speeds. The image is then transferred onto virtually any paper or plastic without penetrating the surface. The image instantly bonds with the media and creates an abrasion-resistant laminated layer, leaving no residual ink on the blanket. Because there is no water at that point, and the image can bond to any media, high ink coverage is not the problem experienced by conventional production inkjet, either.

The following video does a great job showing the Nanographic process in detail.

The quality of the print is also affected by this process because there is no surface penetration as in inkjet or spread as in conventional offset. This provides a level of clarity and detail not available in either of those technologies, regardless of resolution.

Following are some dot comparisons that make it very easy to see. 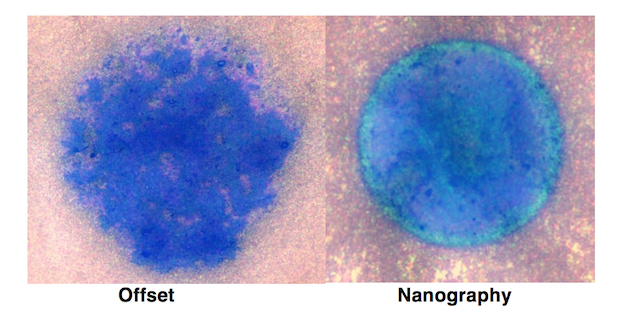 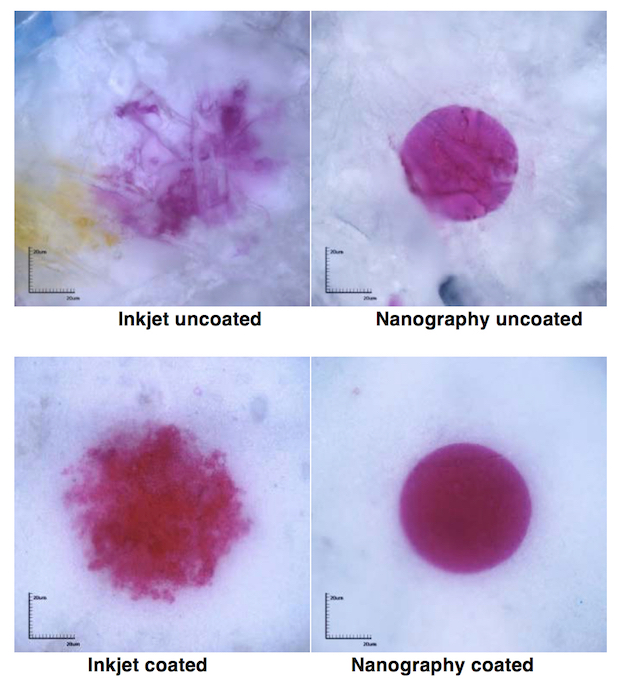 As you can see, there is a distinct sharpness to the nanographic dots that should translate into finer lines, sharper images with more visible detail, and perhaps even higher print contrast. The system supports both AM and FM screening.

In Part Two of this coverage, we will get into the details of the transport, press configurations, the DFE and the very interesting new metallization technology that Landa announced last week.

Very interesting review can't wait to see the S10 run and actually inspect the prints this time. I really hope that the technology is ready.

Thanks for the reporting, we've been running an Indigo since 2010 and really hope we can see the real deal at DRUPA in May-June. Wondering if we have to go through the same get-a-ticket process and watch the show first before we can see a printed sheet? Wishing Mr. Landa success.....

Hi Dave, so who ran the conventional offset test for comparison dots? What was screen, paper, press speed,ink etc..I'd check that comparison a bit further. See ya at Drupa.
Henry

The thing I noticed is that offset has real live production presses running. Just a thought.

yes David... as will all of the EP and other Inkjet vendors

Thanks for the confirmation but so far I've seen nothing but a Zwang and a miss.

Thank you for a great article, David. The thickness of the ink layer is half a micron. Is this an improvement from the 650nm,the thinnest layer as it was recorded in the patent from 2013? Also, "nano" in scientific community is used for particles that are less than 100nm in size. Are there any particles in the ink which could be described as "true" nano or is this marketing term "nano" only related to 500 nm?

Is a comparison graphic showing the gamut difference between the three print processes?

It would be advantageous to show the recycling report. If INGEDE has done the test it carries all the merit Benny needs.