Gecht and Wynn at EFI Connect: for Printers, the Ultimate Vegas Double Bill

As leaders in their respective fields, Guy Gecht and Steve Wynn share an exceptional ability to hold a stage and captivate an audience. Both played to a packed house as keynote speakers at EFI Connect 2016. 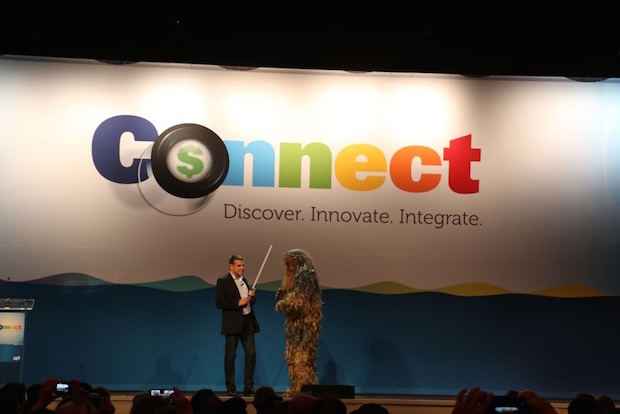 Guy Gecht and a trusted associate at EFI Connect 2016

If Steve Wynn didn’t already have a full-time job as a casino magnate, he probably could build a successful career as a motivational speaker. He might even be able to hold his own on stage with Guy Gecht, a tech company chief outdone by nobody as an executive cheerleader at business conferences.

In fact, the two master persuaders did share a stage briefly at EFI Connect 2016, a user group conference sponsored by EFI, the company that Gecht heads as CEO. Wynn was, as Gecht put it, the event’s “landlord” in that the program was held at the Wynn Las Vegas, one of its namesake’s premier resort properties. On January 19, Gecht and Wynn delivered back-to-back keynotes to kick off the conference and to get its 1,300 attendees into a properly motivated mood for the intensive agenda to follow.

Both keynotes were management homilies, with Gecht’s remarks stressing the importance of a maintaining a progressive attitude toward digital printing technologies—the stock in trade of EFI. Wynn came at it from a different direction, declaring that printing companies—like luxury hotels—are only as viable as the customer-focused behavior they inspire in the people who work for them. Both keynoters made their points with verve, enthusiasm, and, in Wynn’s case, a big dose of the streetwise but good-humored bluntness that has helped to make him and his many casino ventures famous.

Speaking of empires, the one at the heart of the Star Wars franchise is a personal favorite of Gecht’s. His presentation was themed to the movie series, complete with a light saber for a prop, an EFI executive in a Wookie costume to hand it to him, and big-screen images of Yoda and his reverse-syntax proverbs about using the Force to overcome enemies and obstacles. It all added up to what Gecht called his “Guy-Lines for Becoming a Jedi in the Business of Printing”: a playful title for a serious lecture on getting and staying ahead of the technological change now transforming some parts of the industry and disrupting others.

According to Gecht, one of Yoda’s most basic rules for printers is, “Don’t be the last to buy an analog press.” A better “Jedi strategy” for a printing business is to align itself with digital trends that can rekindle demand for certain kinds of printed products, as web-to-print e-commerce has done for catalogs. Another is to “take the short road to long profits” with short-run digital printing, especially the personalized kind.

The core of EFI’s business is front-end controllers and software for short-run, variable-data production on digital presses, capabilities that Gecht has been in charge of expanding at EFI as the company’s CEO for 16 years. Nowadays, he said, “we are in the people business” as print technology developers and print service providers because of the increasing share of production that consists of personalized short runs.

Another “Guy-Line” exhorts printers to “look beyond paper” in printing and consider the possibilities brought about by “the imaging of things”—printing on objects that were not traditionally thought of as printable, but now can be with the help of inkjet production systems and related workflows.

EFI has been developing and acquiring capability for printing on textiles and fabrics, decorative tiles, floor coverings, and other mediums that fit into the very broad definition of the imaging of things. Some EFI customers have been experimenting with it as well, and Gecht said that to encourage them, EFI has launched a web site called the Imaging of Things Exchange. To be found here, said Gecht, are concrete examples of what printers can learn to do—and potentially profit from—when they begin to think of printing as something they can perform on surfaces besides the ones they are used to working with.

“Don’t touch what you can automate” is the Guy-Line for freeing print production from frictions and bottlenecks that don’t have to be there, and shouldn’t be. EFI specializes in automated workflow solutions for eliminating pointless touch points, and many of the conference sessions at EFI Connect were about putting these solutions into practice. “The future is the only thing you want to touch in the printing business,” declared Gecht. “A non-automated workflow is a trap—a profit trap.”

No homage to Star Wars would be complete without a warning to beware the Dark Side of the Force. According to Gecht, printers succumb to it by refusing to bet on technologies that could redefine and revitalize their businesses. “A no-bet is a guarantee not to win,” he said, urging printers to trust their feelings—backed by good data—to tell them when the right moment to place the wager has come. 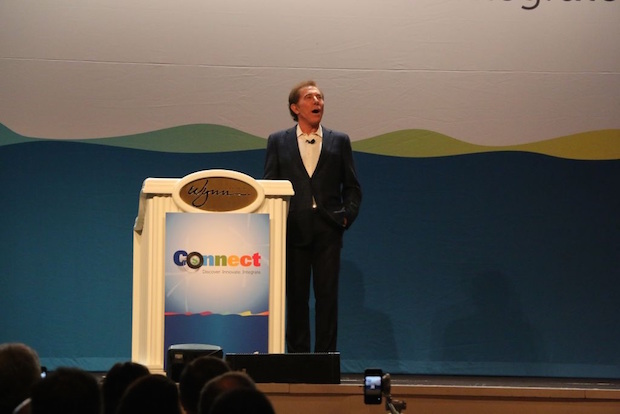 No one understands the necessity of wagering better than Steve Wynn, and, as he told the Connect conferees, he has taken more than his share of big risks on the way to the top ranks of the gaming and hospitality industries. But, he based his prescription for achieving management effectiveness on something that can’t be finessed by oddsmaking or luck—impeccable customer service delivered by unstintingly self-motivated employees.

Printing companies are like luxury resorts, said Wynn, in that both have to insist on being “not the cheapest you can buy.” To maintain that stance, “we’re all hustling our stuff” on the premise that it’s better than the competition’s, whether the “stuff” is lavish hotel appointments, ink on paper, or the kinds of products that EFI sells.

But at the end of the day, said Wynn, it isn’t hustling the stuff that brings business success—it’s earning the trust of those whom the stuff is hustled to. Because “only people make people happy,” employee interactions with customers are what ultimately fulfill or kill the value proposition.

Wynn said his organization has found that the greatest single motivator for this kind of employee performance is “enhanced self-esteem”—the personal boost that people get from feeling good about what they do on the job. When employers make it possible for employees to engage in customer-supportive behavior that lifts self-esteem, he said, they will repeat it “incessantly.”

At Wynn resorts, the thing that drives performance is “storytelling”—a management technique that encourages employees to share and be conspicuously recognized for the good deeds, large and small, that they have done on behalf of guests. Managers actively solicit these stories from their work teams and encourage discussion of them at pre-shift meetings.

The best ones circulate all the way to the top. Wynn spoke with pride of the bellman who drove all night to bring a couple a package of medication they’d left at home but would desperately need in the morning. The employee averted a medical emergency and earned a place of honor among Wynn’s 12,000 employees.

“Would you believe it, we have a hundred of those a week,” said Wynn. By inviting people to speak for themselves and claim the tributes they’re entitled to, “we positively reinforce the behavior we’re trying to encourage.” It’s a better motivator than traditional employee-of-the-month awards, he added, because unlike those programs, the storytelling approach lets people self-nominate.

Wynn also tackled politics, education, and what he regards as a dearth of common sense in government. His choice of words being a bit salty, and this being a non-political, family-friendly blog, those portions of his talk will have to be passed over in the present post. But, we thought that Wynn’s unique take on management success was, like Gecht’s, very much worth listening to and equally worthy of being reported here.