US commercial printing shipments in 2015 have started well with a good January and a strong February.

By Dr. Joe Webb Published: April 9, 2015
US commercial printing shipments in 2015 have started well with a good January and a strong February. February shipments were up +$300 million compared to 2014, +5.2%. The inflation-adjusted figure is virtually the same as inflation has been slightly negative in recent months. The chart shows combined shipments for January and February (click to enlarge): 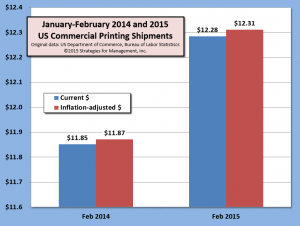 While shipments were better than 2014, they do lag 2013 levels. Nonetheless, this recent resilience in printing shipment is welcome. Including September 2014, current dollar shipments are averaging +3.2% in monthly year-to-year comparisons, and +2.3% after inflation. The 12-month-moving-total of shipments is $78.2 billion in current dollars, up +1.5% compared to the twelve months ending February 2014. After inflation, they are up +0.1%. We continue to advise clients that it is essential to continue repositioning for future media changes, and this relief from steady declines be used as breathing room for such preparations and investments. The most recent profit reports showed a decline in industry profitability compared to 2013, so there are still room for efficiencies from wise investments, superior management, and forward-looking acquisitions. * * * All statistics should be approached with caution, of course. The Commerce Department will release revised data in mid-May, with revisions for the last three years, and possibly further back than that. We will keep readers advised. # # #