US commercial printing shipments started with a good January,

By Dr. Joe Webb Published: March 5, 2015
US commercial printing shipments started with a good January, up $173 million (+2.8%) on a current dollar basis and up $178 million (+2.9%) on an inflation adjusted basis. Since inflation is now negative (overall prices going down according to the Consumer Price Index), purchasing power is arithmetically higher, so the inflation-adjusted dollars are worth more than they were in 2014. There was a mild revision down to the December 2014 report (-$5 million), which kept annual shipments at about $78 billion (+0.2%) compared to $77 billion (-0.6%) after inflation adjustment for the year.  The chart below is the updated annual shipments for selected years starting in 1995 (click chart to enlarge). 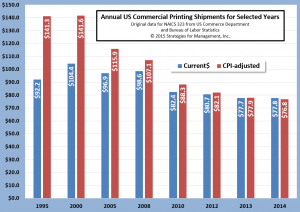 The last six calendar months have commercial printing shipments growing at an average rate of +2.5% in current dollars and +1.3% after inflation. Like the period of 2005 to 2006 where commercial printing shipments had some stability, we recommend that print businesses consider this to be a period of breathing room where they plan their next moves. There are some printing businesses that are producing strong results, benefiting from reduced competition as they absorb volume of weak or closed competitors, incremental benefits of acquisitions and tuck-ins, and new product offerings. There are significant technological changes ahead that can shake any market stability such as the rise of smartphones and social media in 2007 and the introduction of tablets and ebook formats in 2010, and the recent emphasis on content marketing which is mainly targeted digital format documents. These trends continue to sap new communications dollars. Our recommendations? Focus on offline communications and specialty products that have tie-ins to digital media. While direct mail may be having a bit of a rebound according to recent data, be sure to make investments in data management and automation that can absorb increased postal costs while reducing other costs. The net result will be better costs for your clients. Combined with specialty product offerings, direct mail and other forms of traditional print can be more effective. But never assume future conditions will ever be "business as usual." # # #