The greeting card, a tradition and an industry in one, is struggling in its present form but faces no shortage of creative possibilities for the future. 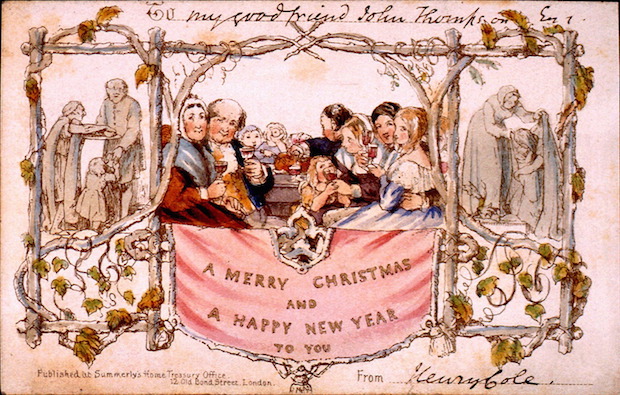 Christmas as it’s presently celebrated didn’t exist as a holiday before the middle of the 19th century. One of the things that helped to launch the observance was the publication of the first Christmas card in 1843. After a British painter named John Callcott Horsley designed the card (pictured above) as a private greeting to friends, a London lithographer produced 1,000 hand-colored copies for sale to the public. Within about 20 years, cards were in mass production by various publishers for a market that continues to herald the holiday season with them to this day.

Horsley’s creation also marked the nativity of the greeting card industry, which put down U.S. roots with Boston printer Louis Prang’s 1875 release of the first line of Christmas cards in America. Today, says the Greeting Card Association (GCA), Americans annually spend between $7 and $8 billion on 6.5 billion greeting cards of all kinds. They come from an industrial sector that consists of about 100 greeting card publishers and many more printing companies that manufacture greeting cards without publishing them.

Despite its rich history and broad footprint, however, the greeting card industry has come under serious pressure. Internet-based alternatives to printed greetings, the rising prices of cards, and the high cost of first-class postage have dampened people’s enthusiasm for sending them, even in the peak year-end holiday season. Card printers face competition from offshore producers and online services that let consumers design and print their own cards on demand. According to market analysts IBISworld, the odds against cards have shrunk the market for them by 5% per year since 2010. The downward trend is expected to continue.

But, business reverses haven’t diminished the creative impulses that greeting cards continue to inspire. For example, a Boston-based startup called lovepop sees an opportunity to give greeting cards fresh appeal by fashioning them as elaborate, 3D paper sculptures along the lines of the Asian art form known as sliceform kirigami. To make the experience of exchanging lovepop cards convenient as well as beautiful, the company will hand-inscribe and mail the cards for those who order them online.

Greeting cards usually are sized for ordinary mailing, but they don’t have to be. Those who want to make big holiday statements with cards as large as 3' x 4' can order them (along with envelopes) from sources like this one. If those dimensions fail to impress, consider the mega Mother’s Day card that holds the current record for size in the Guinness World Records 2016 rankings. Produced in Dubai to promote Nestlé NIDO, a powdered milk beverage for children, it measured an imposing 33' x 23' closed and an even more striking 33' x 46' open.

At the opposite pole of record-setting is the card that the World Record Academy (a Guinness competitor) declares the smallest ever: a Christmas greeting so minuscule that 8,000 of them could fit on a first-class postage stamp. Nanotechnology scientists at the University of Glasgow in Scotland etched the multicolor image into a tiny piece of glass by means a technique called plasmon resonance. The card is measured in micrometers (millionths of a meter), 200 wide and 290 tall—absurdly small, even for the tiny fingers of Santa’s smallest elves.

Speaking of elves, these children at the WowART Learning Studio in Singapore made what they say is in fact the world’s largest Christmas card: a collage on 1,300 square feet of calico cloth with 200 rolls of duct tape and 100 paint bombs containing 88 liters of paint as its primary media.

It was a one-off, and it probably would have been impossible to mail—but it epitomizes the artistry and the festive spirit that have infused greeting cards ever since people began sending them to each other. We wish every one of our readers—Christmas card exchangers or not—all the peace and contentment that the holiday season can bring.