A Night to Remember for DWS Printing Associates

Can you say “sesquicentennial”? It’s an anniversary. This company feels the pride and the joy of every one of its 150 years. 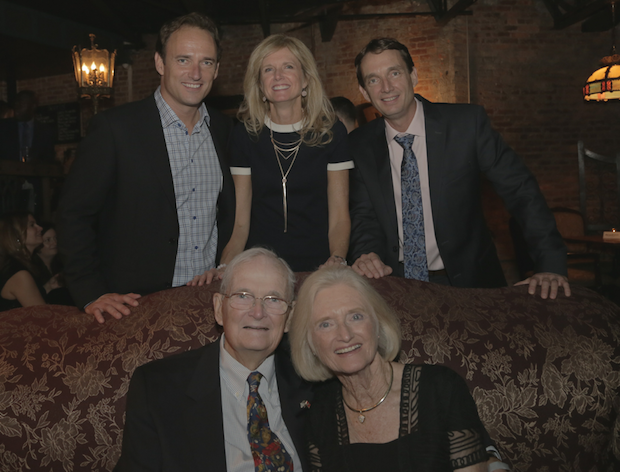 The third and fourth generations of the Staib family: seated, Allen Staib and Edith Staib; behind them, Andrew Staib, Kathy Staib, and Thomas Staib

Last year, we published this profile of DWS Printing Associates, a label printing company in Deer Park, NY. Mentioned in the story was the fact that the Long Island company was preparing to celebrate its 150th anniversary in October of this year—an occasion it observed with a gala festivity that we had the good fortune to attend.

When the Staib family discovered that the two-dollar word for the 150-year mark is “sesquicentennial,” they had fun with it. They began slipping the sesquipedalian sobriquet into promotions announcing the big party they threw for customers, employees, and friends at a theatre in Huntington, NY, on October 15. There, guests watched a blooper reel of various people trying and failing to pronounce the unpronounceable word. One of the party favors was a large bottle of custom-brewed beer with a label that offered a phonetic translation of the tongue-twister. Never has a word so unwieldy been put to more apt or convivial use.

Behind the smiles, though, lay an archetypal success story—a case study into why the bedrock of the printing industry remains its family-owned firms. The Staibs, now in their fourth generation of ownership, have made all the right moves in terms of market identification and technology investment. The fact of their company’s longevity bears that out, as does their expansion and prosperity during recessionary times that brought many other printing businesses down.

But, a closely held firm doesn’t get into sesquicentennial territory without something else just as key to its endurance—something that was on abundant and often moving display at the gathering on October 15. That’s soul: a blend of pride, passion, principle, and kindness that gives a company not only its direction as a business but its conscience as a circle of endeavor where everyone works together in craftsmanship and mutual respect.

Some businesses wear these ideals lightly, if they acknowledge them at all. Family owners like the Staibs live by them. Tom Staib and Andy Staib, the executives in charge, spoke emotionally of the family members’ commitment to each other and to the company whose legacy they live to perpetuate.

The vision quest, said Tom Staib, is to make DWS Printing Associates “the premier label and packaging design printer in the U.S.” This is a distinction it already lays strong claim to in the craft brewing industry, to which it is a leading supplier of labels. Quality and continuous improvement will deliver the future the family is striving for. “By God, I believe it,” said Staib. “Average is out. Complacency is out.  Excellence is in.”

With no less conviction, Andy Staib noted that part of their responsibility as fourth-generation owners was to give back. The company does this by supporting initiatives like Rock and Wrap It Up!, which has recovered and redistributed more than one billion pounds of non-perishable food from concerts, sporting events, and other sources from which it would otherwise go to waste.

But, DWS Printing Associates reserves its most sterling acts of kindness for its own. The evening’s most emotional moment came with the presentation of a check for $5,000 establishing a scholarship fund for the children of an employee whose family had suffered an intense personal loss.

There was emotion of an equally inspirational kind in the presentation of a 150-year-old Seth Thomas clock by the fourth-generation Staibs to their father, Allen, who joined the company in 1961. Naturally, the stately device symbolized the rich past history being celebrated.

But, it also betokened the fact that this remarkable company still has time on its side. When DWS Printing Associates reaches its bicentennial, the milestone will be easier to say—but no grander to commemorate than the one that warmed so many hearts on October 15.