As you may recall,

As I mentioned in Part I, the vendors are coming from quite different places as they approach their future plans for finishing. For instance, the predominant rollfed vendors--IBM and Océ--seem to have a stronger commitment to UP3i. Understandably. As the long time leader in the cut sheet market, Xerox will not want to abandon their sophisticated existing protocol unless UP3I can match up. Meanwhile, the digital finishing equipment vendors are coming on strong. The equipment is getting more sophisticated, devices may be able to service both digital and offset, operate in more than one mode, and manual paper handling may go away before new protocols can be adopted. Finishing is an area to keep your eye on.

How does your company stand on the finishing protocol UP3I ?

JS-Xerox: Jerry says, "UP3I is a near and dear itch." Jerry is a member of 2 core teams, CIP4 that manages JDF and the UP3I initiative. Stating that UP3I is the "richest opportunity for customers," Jerry adds "The only way to automate is to get the job information to the backend part of the process." For Xerox, that may mean getting the information to an intelligent interface such as a finishing controller. Jerry also observes that UP3I has been primarily focused on the continuous feed products, justifying the interest of Océ and IBM. With the broad breadth of products in all speed categories that Xerox has developed, they have managed to connect pretty seamlessly inline and online through their protocol DFA. While UP3I may not be a pressing issue, Jerry says it is considered "a next generation."

BO-IBM: As a core member of the UP3I initiative, with Océ and Xerox, IBM strongly supports the greater interaction that the protocol allows. Stralfors and Hunkeler started UP3I because postpress vendors don't have the resources to continue unique development with every printer vendor. According to Bruce, ten years ago, connectivity from Xerox, IBM, Océ or Nipson to postpress meant finishing partners had to spend money with each new vendor. The protocols were all different. It was troublesome for the customer from a technology and a productivity standpoint. Bruce believes that the postpress vendors can do more in their channel if they do not have to interface to each press differently.

"You want to control the whole line from a single panel," says Bruce, "and be able to gather data." Any process management system needs continuous production measurement so you can see the variances. Today, customers are recording the data manually. "With UP3I they will be able to gather it in an automated fashion and get real-time productivity of the entire shop," Bruce explains. With a standardized JDF job ticket, certain finishing information such as kind of paper; paper size, binding or color insets are present. But you would have to enter the information into a keypad at the finishing device, or a keypad to transfer to the device. You would be entering it more than once. There is the need for additional finishing information, such as being able to define start and stop or signaling an alert for a problem. With the UP3I interface, the job ticket would have all this.

Regarding the speed of adoption for UP3I, Bruce prophecies that it will be "limited to digital printing systems, continuous or cutsheet. But the migration to cutsheet will be longer." Since Xerox owns 80% of the cut sheet market, and their MMP protocol is more sophisticated, they have been reluctant to switch to UP3i. However, Xerox has joined the Initiative and is working to add value to UP3I. "I am seeing pre and post vendors using it already," says Bruce, "but things don't move that fast. It took 1.5 years to define the standard and it will be another 2-5 years before it is pervasive, and at that point it will migrate to cut sheet." 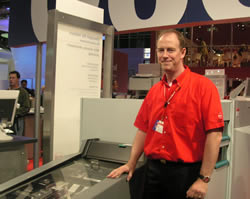 HS-Océ: A founding member of the UP3I Initiative, in their booth Océ showed the UP3I-compliant cutsheet Varioprint 5160 with its partner, Duplo. Using Océ's PRISMA software, Océ ScanStation 650, an Océ VP 5000 Interposer, Océ VP 5000 Stacker (with side and corner stitching by Heidelberg), and the Duplo bookletmaker for saddle stitching, the company claimed true end-to-end processing with maximum flexibility. Optional was the Hunkeler rollfeeder, which was announced at UP3I compatible last year.

"A change from A4 paper to A5 used to take 5 to 6 minutes (could be hours on web systems)," the operator in the Oce booth told me, "And now it is only 30 seconds." According to Hans Swart, Segment Marketing for Océ, "UP3I is best for a lot of different formats. It is especially good for variable data and mailings, where integrity is important. It is very useful for transaction documents, as well."

CB-NexPress: " UP3I is probably one of the more prominent device interfaces," says Chris of NexPress, " because it is the building blocks coming together --from the concept to finished goods." Chris thinks that the challenge is to integrate the JDF workflow with UP3I devices, and the company "will be working on that." Nexpress has been active in the UP3I Initiative and JDF groups.

What other trends in postpress are getting your attention?

JS-Xerox: Jerry says, "There is a strong interest in finishing equipment that can handle both digital and offset. A collator tower is needed for offset, but doesn't do the job for digital. Now a new generation of nearline finishing can work for both." Another trend is to automate physically moving the paper, not just moving the data. Paper has to get to finishing devices and it is still a manual process. There are dollies on wheels, but paper is still being manually loaded into the feeder or clamp or laminator or punch. Xerox and a few key partners have developed Stackport, which is the beginning of automating paper movement.

EI-HP/Indigo: Eli agrees that there is intention to have finishing for both digital and offset, "but JDF must be translated from offset. It will be up to the press vendors to see how to do this." He also sees a big increase in the amount of digital equipment coming into the label and packaging industry, where it is sorely needed. "1/3 of the HP/Indigo business is labels," Eli says.

BO-IBM: One big trend is digital finishing equipment becoming more sophisticated. I mean how it takes information in and converts it into useful information and how it reports information back. For example, with inserting equipment. There is not one that cannot tell you how many sheets are printed, how many sheets are thrown away. You get a full report. This is a huge level of sophistication which 10 years ago didn't exist in inserting. Another example is perfect binding. The Müller Martini Amigo, for instance, automatically knows the thickness of the covers and the desired finishing size, checks the cover against received information and decides to marry them. Five years ago that didn't exist. Another step forward is the Stralfors cutter with controls for troubleshooting right on the screen with pictures.

According to Bruce, "Customers are asking for improved productivity and lower costs. They want what will make that happen. As for hardware units, they just want to plug them in!" I'm with Bruce.