A rapid changeover from conventional to digital production was both the cause and the result of the installation of digital printing equipment at Accu-Label Inc. 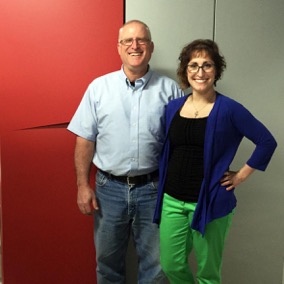 When change comes to the label business, it can happen swiftly. Dave Manning, a flexographic label printer for nearly 30 years, saw 40% of his volume move to digital less than two years after installing his first Xeikon digital press. Now that a second digital label printer from Xeikon is coming on line at Accu-Label Inc., Manning figures that it won’t be long before his production splits evenly between flexo and dry-toner electrophotography.

Fortunately, he says, the “huge adjustments” of the transition have been accompanied by some equally sizable advantages that help keep him ahead of changes in demand—a moving target that his customers seem never to run out of ways of making more challenging to hit.

Located in Fort Wayne, IN, Accu-Label is a family owned and operated label printing business with both roots and a future in flexography. Manning and a partner started it in a garage in 1987 with a three-color, 7" flexo press, and today, Accu-Label continues to rely on flexography for its high-volume production. The main workhorse is a 10-color Mark Andy XP with foiling, lamination, and UV coating among its capabilities. It is soon to be replaced by a Mark Andy P-series press of an even greater productive capacity.

Manning says that he began thinking about going digital eight years ago when he started to notice differences in the patterns of some of his customers’ orders. Quantities were going down, and complexity was going up—a game change that flexo wasn’t inherently well equipped to handle.

What happened over time, Manning says, was that “we experienced a huge influx of small SKUs” with six or seven colors and high quality requirements. His flexo press could print these small runs, but printing a lot of them in succession led to what he remembers as a “nightmare" of plate changes and prepress logistics. In a job consisting of, say, “6,000 inch-and-a-half by threes,” the nightmare could intensify to a point where “we made more waste than we did good product.”

Manning—running the 30-employee company with the help of daughter Catie, marketing manager—said he knew as early as 2007 that the answer lay in digital. The first order of business in those days, however, was surviving the recession and expanding the plant to the 38,000-sq.-ft. footprint it covers today. Platemaking also was brought in-house, and the customer base grew to include food and beverage, automotive, retail, industrial, and chemical companies as well as not-for-profits.

The Mannings began to realign production with changing demand by installing a Xeikon 3500, a five-color, 20.3" web press with a top speed of 63 feet per minute. Dave Manning says that for a flexo shop used to running at 400 fpm to 500 fpm, the more restrained digital pace took some getting used to. But, experience soon was to show that in transitioning from conventional to digital label output, running speed wasn’t the key criterion—and neither, necessarily, was the ability to produce short runs.

The Xeikon 3500’s short-run economy certainly comes in handy for serving Accu-Label customers who like to keep their label inventories to a minimum by ordering in small quantities. But run length, says Catie Manning, isn’t always the primary determinant of what does and doesn’t go on the digital press.

In many cases, job complexity is. Labels that change their designs or content usually have to go through multiple iterations, and dealing with the tweaks, say the Mannings, is where the Xeikon 3500 really shines. They like being able to instantly produce as many proofs as customers want to see without waiting for plate changes and other process steps that slow down conventional presses when job parameters shift.

For Dave Manning, a flexo-grounded perfectionist who has invested heavily in his graphics department to make sure that whatever comes out of his pressroom is “acceptable to me,” color matching and imaging quality on the Xeikon are everything he expects in a digital press. Catie Manning says that the combination of all these virtues has been a “huge plus” in building a digital strategy for Accu-Label and making customers partners in it.

Still, in some jobs, speed is everything, and Dave Manning says that there were times when he wasn’t satisfied with the throughput on the Xeikon 3500—not because of limitations in the press, but because of the large volumes of work he was starting to put on it. The hoped-for solution, being uncrated and set up now, should be in full operation at Accu-Label by the end of the month.

It is another piece of technology from Xeikon: a Cheetah press, one of just three installed so far in North America. What it brings to Accu-Label are an additional web width (13"), 1,200 x 3,600 dpi resolution in five colors including opaque white, and a significant speed increase over the Xeikon 3500 (98 fpm).

Dave Manning likes the idea of having two web formats to work with—jobs that overflow or don’t neatly fit the 20" web now can be accommodated on the 13" platform. Additional flexibility will come from configuring the two presses differently for color. Above all, thanks to the Cheetah’s high running speed, there’ll be enough extra capacity to handle high-volume workloads like the ones coming from the customer to whom the shop delivers eight pallets of digitally printed labels per week. Both of the roll-to-roll machines are supported by a Xeikon-supplied offline finishing system for coating and laminating, diecutting, slitting, and rewinding.

With the corresponding investments that the Mannings have made in flexo and digital printing, Accu-Label is an interesting test case in how complementary the two processes can be. As long as the shop continues to have customers whose orders can take a dozen or more shifts to complete, flexo will remain the high-volume king—digital printing, says Manning, hasn’t reached the point where it can deal cost efficiently with quantities on that scale.

Flexo’s long runs, however, yield lower margins than short runs on the Xeikon equipment. It’s not possible for the Mannings to say which process is “better” from a strictly business point of view; what they do know is that they need both capabilities to keep their customers happy.

Bringing some of them into the digital fold, says Catie Manning, was not “without pain,” but she emphasizes that her customers are the ones who “drove us going digital in the first place.” If getting their work done sometimes means splitting a job between the two methods, this is what the shop does. (“We’re kind of spoiling them,” she says.)

Serving many different markets, Accu-Label isn’t concentrated in verticals. The food and industrial sectors are where the Mannings anticipate the most growth as their digital and flexo capabilities continue to expand. They think that on the digital side, witnessing the growth could even be a form of entertainment.

This is because the Xeikon digital equipment is “fun to run,” Catie Manning explains. Her father adds that working with it can be “a huge distraction,” but for a reason that’s easy to excuse. “Everyone wants to watch it,” he says.