You can honor those who serve, have served, and will serve in America’s armed forces by buying and quaffing “Homefront IPA” this Memorial Day. 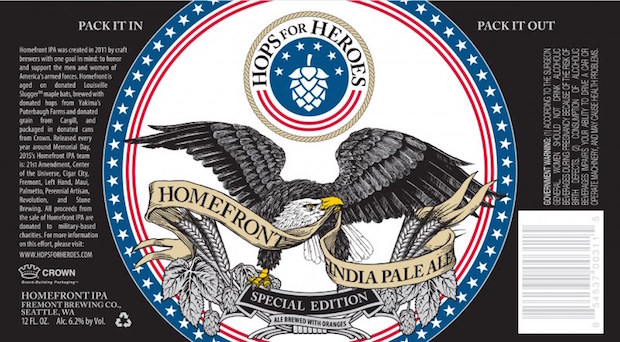 One of the signature sounds of Memorial Day (May 25) will be the volley-fire crack of pop-tops lifted from millions of beverage cans. Some of these containers will have something meaningful to do with the holiday and the tribute it pays to the past, present, and future members of America’s armed forces.

Hops for Heroes was born in 2011 when two craft beer producers, Fremont Brewing Company and Center of the Universe Brewing Company, decided to create a “charity beer” as a fundraising tool for Operation Homefront, a group that provides emergency assistance to military personnel and their families. All proceeds from the sale of “Homefront IPA” went to the group, which netted about $80,000 from the project in 2013.

Other craft brewers signed on, and today, Hops for Heroes has the support of 10 breweries that make the beer and donate 100% of the money to a selected military charity. Last year, with the help of distributors and suppliers who pitched in to contribute malt, hops, labels, bottles, branding, and boxes, participating brewers raised more than $200,000 for Operation Homefront.

The 2015 beneficiary will be Soldiers’ Angels, an outreach organization whose motto is, “May no soldier go unloved.” As last year, a major assist will come from CROWN Beverage Packaging North America, a leading supplier of metal cans and closures for consumer and industrial products. CROWN will donate cans, graphics for can printing, and freight for shipping so that the participating craft breweries can produce their own versions of Homefront IPA for mutual release in time for Memorial Day.

Drinking Homefront IPA “does more than just quench your thirst, it improves the lives of our soldiers,” says Hops for Heroes. Fremont Brewing describes the beer as “brewed with oranges and aged on Louisville Slugger® bats donated by the legendary bat maker.” We’re not sure what kind of a tasting experience that will lead to, but if we can secure a can for a Memorial Day toast to America’s men and women in uniform, we’re willing to find out. If we find that we like Homefront IPA, we’ll probably be toasting our heroes more than once.