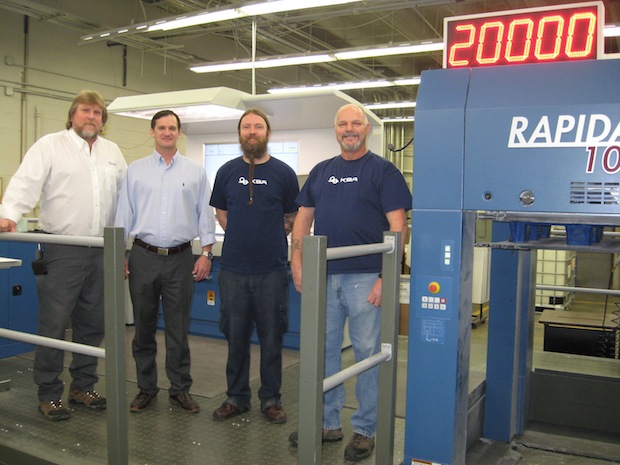 With the KBA Rapida 106 press that set a production record at Winston Packaging are the personnel who did it, from left: Kevin Southern, pressroom superintendent; Vic Tedder, plant manager; David Nelson, lead operator; and Roy Davis, assistant operator. Not pictured is Clifford Bullin, also a lead operator for the record-setting run.

Setting a production record is exciting. Turning that record into a benchmark for future performance is satisfying. Winston Packaging knows both states of mind very well.

Excitement came last August when the 104-year-old packaging producer ran almost 128,000 full-size sheets of paperboard on its six-color KBA Rapida 106 press in seven hours at an average speed of almost 19,000 sheets per hour. This, says the manufacturer, stands as a world record on the platform, which was installed at the printer’s Winston-Salem, NC, plant about two years ago.

To Winston Packaging, though, it’s a pace the machine now routinely achieves on behalf of the Fortune 20 customer for whom the world-beating run was carried out. The work is seasonal, and in peak periods, the Rapida 106 will operate at close to its 20,000-sph top speed for packaging once or twice a week, consuming an entire truckload of paperboard—135,000 sheets—each time. The machine’s crew almost tied the record recently, falling short only because they interrupted production during the shift four times vs. the three press stops they held themselves to in the record-setting run.

That may be very impressive to other printers, but what does it say to Winston Packaging’s customers? Two things, according to James Gordon, the company’s third-generation owner, president, and CEO.

“First, we have world-class technology with the first KBA installation in North America of this generation of Rapida 106. Secondly, we have the skilled operators to get the most out of it. In other words, we should be competitive with most anyone in the marketplace.”

The company’s longevity attests to its skill in maintaining a competitive edge, but there is more to Winston Packaging’s success besides the prestige of its of years. Stringent quality control, smart technology investments, and ultra-efficient production workflows also anchor its reputation in an industry segment where keeping customers happy can be as challenging as outperforming rivals who want to take them away.

Historically a specialist in packaging production for its home state’s tobacco industry, Winston Packaging has branched into additional markets as taxes and health regulations have taken their toll on the consumption of tobacco products. But, says Gordon, the experience gained in working with cigarette giants like R.J. Reynolds Tobacco Company—still a customer—has always been at the heart of its skill set in printing high-end consumer product packaging.

Doing it RJR’s way meant mastering color management with heavy solid brand colors and metallic inks, Gordon says. Precision finishing became a must for cartons made for machine-filling on high-speed packing lines. Another learning curve was figuring out how to duplicate in offset the print quality that tobacco customers had been used to achieving in gravure when that process was the norm for their packaging.

The difference between offset printing and gravure printing, says Gordon, is like the difference between covering a wall with one coat of paint instead of three. Winston Packaging, an early-adopting pioneer of color lithography in North Carolina, overcame the handicap by learning how to push offset ink film density to the limit—an objective the company pursued with the help of its ink suppliers.

This feat and the ability it gives to print photo-realistic images on paperboard have put Winston Packaging on a fast track in cartons for dry and frozen foods, says Gordon. He says the company also is doing well in retail health care products such as over-the-counter medicines and nutraceuticals.

Nearly all of the volume is in folding cartons, although cut-sheet offset and roll-to-roll flexo labels also are offered. The mainstay of the pressroom is the Rapida 106, supported by a CTP system and a diecutter that match the oversize format of the press.

“Oversize” refers to the Rapida 106’s 29.13" x 41.73" maximum sheet size, larger than the 29" x 40" dimensions of standard full-size sheetfed equipment. Although the extra surface area may not sound like much, says Gordon, it gives considerably more latitude than the 40" format for laying out packaging forms on the sheet. Thanks to the addition of a comparably sized Bobst SP 106 E diecutter, finishing can keep up with the high output of the press. The result, says Gordon, is that “our customers are getting better looking cartons delivered sooner.”

If “better looking” and “sooner” are attributes that please Winston Packaging’s customers, “short run” ranks just as high on their list of expectations. Gordon notes that the company is seeing increased demand for packages in quantities even smaller than what the usual definitions of “short run” indicate.

He says that when the Paperboard Packaging Council (PPC) recently surveyed its members about run lengths, it found that they consider a “short run” to be 4,800 press sheets and about 7,300 cartons. But, he adds, “our experience has a short run being significantly less, with quantities in the range of 1,900 press sheets and 4,000 cartons.” On this scale, a medium run for Winston Packaging could span 2,500 to 10,000 sheets, and anything in excess of 10,000 would qualify as a long run. (This, Gordon says, is one reason why it’s good to have those recurring 135,000-sheet jobs for the Rapida 106.)

As every printer dealing with declining run lengths knows, profitability can be hard to hang onto in smaller quantities. “Our customers want us to let them keep the same price point while they reduce the run by 25% to 33%,” Gordon says. “There is only so much you can do.” Fortunately, he says, the automation features of the Rapida 106 let it be set up quickly and efficiently for short runs, linking production economy to press speed.

Gordon understands the technological direction in which the trend to shorter runs will take companies like Winston Packaging. “It is our opinion that we are now witnessing a repeat of the digital print evolution in the packaging market similar to what happened in the commercial print market from 1995 to 2005,” he says. “We agree that over the next 10 years digital devices will have a much larger share of the printed packaging market.”

For the time being, however, production at Winston Packaging remains 100% conventional except for the small amount of prototyping the company does on its inkjet proofer. The strict reliance on offset isn’t because of aversion to digital printing. Live Wire Graphics, a digital division for direct mail and other small-format work, operated for a while in the 1990s with toner-based and DI offset equipment until the parent company, originally a commercial printer, decided to focus exclusively on packaging.

Now, Gordon is scanning the technological horizon for a short-run digital packaging printing solution with capabilities and economies comparable to those of offset. He hasn’t found it yet, but he suspects the answer may lie among the B2-format (20" x 29") sheetfed inkjet presses that have been entering the market over the last few years. In his opinion, B2 inkjet is the “beachhead” where digital can cross over into packaging production.

Variable printing isn’t crucial to his plans. So far, says Gordon, “we have not seen any interest in personalization because production costs are not economically viable on regular consumer products unless it’s for a special promotion with a generous marketing budget included.” But, he adds that if a customer came to him with a project of this kind, he would either acquire the necessary capability or use an outside source to get the work done.

Fine-tuning internal processes is a constant occupation at Winston Packaging, which prides itself on data-driven manufacturing efficiency, sustainable production, and workplace safety. With 98% on-time delivery as their overarching goal, Gordon and his management team look for opportunities to improve in all facets of the operation from design to delivery.

A Certified G7 Master Printer since 2011, Winston Packaging also complies with what Gordon regards as an even higher standard: the Graphic Measures International (GMI) program for certifying, monitoring, and measuring the performance of packaging suppliers. Brand owners and retailing giants such as Target and Walgreens use the program to ensure that their packaging printers have process controls in place for strict color fidelity and consistent print quality.

For printers, this involves undergoing an onsite certification inspection by GMI that includes sample measurements from production runs. Some participating customers may require test sheets to be submitted to GMI every time their jobs are printed. The hurdles aren’t easy to clear. Gordon says, for example, that the program uses a gray balance target with “half the ?” of the corresponding G7 measurement and is therefore twice as hard to hit.

Operational transparency was behind the decision to install an online enterprise resource planning (ERP) system that lets Winston Packaging’s customers track sales orders, job status, inventory items, and other data in real time. Gordon says that the ERP, in place since 2005, is essential because “most of our larger customers are using a customized inventory program that requires knowing or having access to key information when you need it with the option of downloading spreadsheets for better planning.” The ERP software is Made2Manage, a manufacturing-oriented solution with extensive reporting capabilities.

Winston Packaging applies equal rigor to its efforts in sustainable production and worker safety. It has held triple chain-of-custody certification from SFI, FSC, and PEFC since 2009.  Last year, the company was recognized by the Paperboard Packaging Council for safety in reaching 500,000 hours without time lost due to accidents. “It helps that our plant manager is a former volunteer fireman who understands the importance of safe practices and has the full support of senior management,” Gordon says.

While packaging may seem “recession-proof” compared with other parts of the printing industry, Gordon finds the assumption simplistic. “When you examine the Paperboard Packaging Council’s annual Trends Report with its 28 end-use market segments,” he says, “you realize that the ‘recession-proof’ label applies to only a handful of these segments.”

Winston Packaging has the good fortune to be in some of them, and it is progressing into its second century with resources to cultivate them as successfully as its home state still cultivates tobacco.