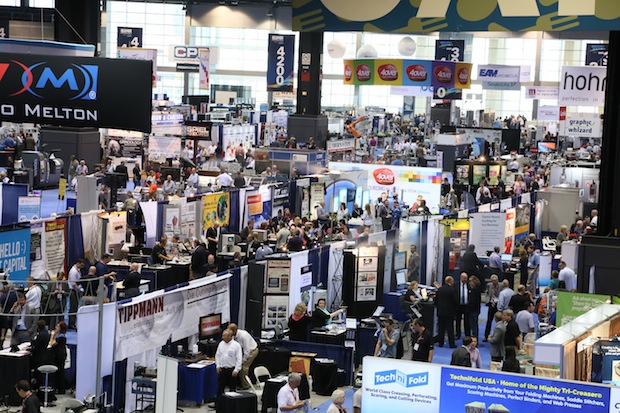 We gained some insight in a conversation with GASC’s Ralph Nappi just prior to the distribution of the press release. We learned that he and GASC are walking a fine line between loyalty to Chicago and a desire to see how the Print and Graph Expo shows will fare in a different venue—perhaps alternating between Chicago and another city in the years after 2017.

Nappi said that the immediate reason for the move to Orlando next year was the need to avoid conflict with religious holidays that tend to fall during Graph Expo’s September time frame. That collision of obligations will occur at Graph Expo this year. According to Nappi, the city of Chicago was unable to provide a conflict-free schedule for Graph Expo in 2016, prompting GASC to look for options elsewhere.

Offering suitable dates, Orlando’s Orange County Convention Center got the nod on March 16. Also in the running, according to Nappi, had been Anaheim, Las Vegas, Indianapolis, and Philadelphia. The decision to relocate to Orlando next year received “a lot of support” from the exhibitors who were notified of it in advance, he said.

He emphasized that there is no plan to abandon the Windy City. “We’re committed to Chicago in 2017,” he said. “We haven’t decided not to be in Chicago.” GASC is holding uncommitted dates for shows in Chicago after 2017, and GASC continues to think of the city as a viable place to stage its trade shows.

Nevertheless, said Nappi, “we’re quiet on the future” in terms of where the shows will be held after 2017. This points to the bigger picture of why GASC set what probably will be a precedent by making Orlando Graph Expo’s temporary home in 2016.

Although the issue of religious holidays was a factor in the decision, it was far from being the only driver. As Nappi knows better than anyone else, some equipment vendors have been complaining for years about the high costs and restrictive rules at McCormick Place, a heavily unionized environment. The Orange County Convention Center doesn’t use union labor, and as a destination for showgoers, its surrounding city is a lot easier on the budget as well.

For example, says, Nappi, of the 25 show-affiliated hotels that GASC directs attendees to in Chicago, only five book rooms for under $200 per night. In Orlando, only five of the hotels GASC will use cost more than $200. Orlando offers closer geographical proximity to the Latin American and Caribbean print markets than Chicago, and its family-friendly attractions speak for themselves.

Does this mean that we can anticipate shuttling between Orlando (or another city) and Chicago for the Print and Graph Expo shows in alternating years? Not necessarily. Despite the positive reactions to the 2016 announcement that Nappi said he got from some exhibitors, he doesn’t yet know how his exhibitor base as a whole will take to being away from the venue where they have been setting up their stands for so many years. And, the Chicago area continues to host one of the largest concentrations of printing and print-related businesses anywhere in the country—another good reason for GASC to keep a foot firmly planted near Lake Michigan.

But a home away from home for the shows pretty clearly seems to be what GASC has in mind. It’s now possible, says Nappi, to picture “a world where Graph Expo isn’t in Chicago year in and year out.” He notes that other graphics industry shows switch between locations, and he reminds us that Graph Expo used to hold a regional spinoff—Graph Expo East—in New York City and Philadelphia in addition to the main event in Chicago.

Nappi says that in new surroundings, there could be a new look and a new feel for the GASC shows. Our view is that if a makeover can help to stem the decline in vendor participation and industry attendance that we’ve been sorry to witness in recent years, changing the venue is well worth a try.

This by itself won’t be enough to answer perennial questions about what kind of ROI can be expected from taking part in trade shows—no city on earth can work the magic it would take to offer GASC’s exhibitors that guarantee. But Orlando seems a promising place to let the sun shine on Graph Expo in 2016—a year that could turn out to be pivotal in the long history of the still-vital GASC events.

Of course, moving Graph Expo in 2016 “to avoid conflict with religious holidays that tend to fall during Graph Expo’s September time frame” is somewhat akin to closing the barn doors after the horses have escaped!

Graph Expo 2015 coincides completely with Rosh Hashana which begins at sunset on Sunday, September 13 and ends at sunset on Tuesday, September 15. This “conflict” effectively prevents any even half-observant Jewish member of the graphic arts community and vendors from participating in this event in any way whatsoever. This is roughly equivalent to scheduling Graph Expo to coincide with Christmas or Easter!

I find it very hard to believe that no one at GASC was aware of this issue at the time commitments were made for these 2015 dates and that if they were, that they didn't realize the magnitude of the problem and do something about it then when they could, including the possibility of moving elsewhere if necessary for 2015!

It reminds me very much of how the Seybold Seminars often scheduled their Autumn West Coast events to conflict with either Rosh Hashana or Yom Kippur with the excuse that the venues were more available and facilities less expensive on those dates — wonder why? Duh!! But the ultimate “chutzpa” was when one Seybold executive responded to my inquiry about this conflict with the statement that “we don't care if you people can't attend.” I will note that the “you people” he referred to are still around, but Seybold isn't!

Dov's last comment reminds me of Frank Romano's famous quip about Wang's prediction of the inevitability of the "paperless office" giving way to the reality of the "Wangless office."

And ironically, I was at Wang Labs during their heydays (1977-83). The demise of Wang Labs had virtually nothing to do with the technologies being marketed and especially those being developed at the time, but rather was due to extreme nepotism at the highest executive level.

Work that I and others were doing there at that time was certainly on the correct trajectory, albeit thwarted by a new chief executive who surrounded himself with brown-tongued Harvard MBA types who supported his belief that a character-based workstation with an 8-bit 4Mhz Z80 processor, 64K of memory, a proprietary network protocol, and a proprietary operating system would be sufficient for replacing paper and be able to be sold for $5000 per desktop for the indefinite future. This was even after the release of both the Apple Lisa and the IBM PC! Obviously, Wang's advanced R&D (that I was one of the leaders of) did not hold that view and had prototypes of software that looked amazingly like what we have now in the 21st century.

In fact, one of the biggest challenges to the print industry at this point is its failure to recognize that in fact enterprise operations (including “the office”) is increasingly paperless and that what is routinely printed is in fact more the exception than the rule.

The Wang prediction (and by the way, it wasn't only their prediction) was faulty only on the basis of timescale as to when this would actually happen and as to whether Wang would really participate in that revolution.

I wonder whether office printing will go the way of smoking, and we will only be allowed to do it outdoors at least 15 feet away from the entrance to the building.

“I wonder whether office printing will go the way of smoking, and we will only be allowed to do it outdoors at least 15 feet away from the entrance to the building.”

This may be the attitude of tree-hugging, political correctness crowd who nonetheless blithely toss their current Macs, iPhones, and iPads for the latest model on a regular basis. (Paper is an awful lot easier to recycle than “obsolete” electronics, replete with carcinogens, rare earth elements, etc.)

The real reason why there is so much less printing is that there are better and more convenient alternatives in most cases that involve on-line documents that can be instantaneously accessed and searched. And for those of us constantly running from meeting to meeting and/or having significant business travel, the idea of continuing to shlepp pounds worth of paper reports and books with today's available technologies is amusingly quaint!

I still print, but it for very specific purposes for which on-line resources either don't work or are inadequate or for which paper is simply more appropriate. (And I still print a copy of my boarding passes and official airline-issued itinerary to deal with situations where the electronic equivalent are not accepted or to deal with airport network outages.)

I would like to concur with Dov Isaacs on this subject. Conducting Graph Expo on the same days as Rosh Hashana is like saying to the Jewish citizens of the industry that they are not welcome.