Experts identify new and expanding—and some unusual—markets for UV inks and coatings at day two of RadTech’s UV.EB West.

Those who remember the 1980s may recall one of that decade’s pop culture icons: Mr. T, known for his Mohawk, his tendency to pity fools, and his extravagant gold neckwear. Most of don’t wear that much jewelry, and not just for reasons of taste. With the price of gold having increased substantially since Mr. T’s heyday, said Adam Trexler, cofounder and president of Valaurum, his accessories would cost roughly $1.5 million. 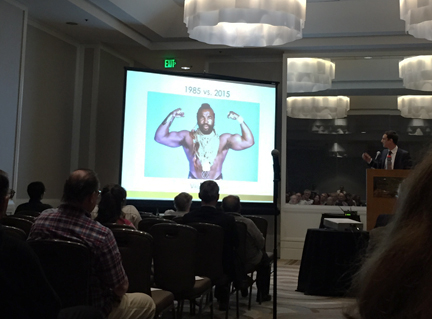 Valaurum is a start-up company that produces a unique printed product: gold. Trexler spoke about his company—and how UV printing helped solve a specific production problem—at day two of RadTech’s UV.EB West conference. As the price of gold has risen, said Trexler, demand for gold jewelry has declined, but demand for gold as an investment has risen correspondingly, even though buying gold is largely out of the reach of the average person. Enter Valaurum, which prints dollar-size gold “bills.” Each bill—called an “Aurum”—contains 1/10 gram of 24-karat gold that is fully assayable and recoverable. Each Aurum costs $10. The Aurum’s text and other content are printed on a unique plastic substrate onto which the gold is then deposited—via a process called sputtering—atom by atom into a thin layer. It is then laminated and a 20-up sheet of Aurums (Auri?) are converted into individual bills.

Valaurum uses a proprietary plastic substrate that needs to be optimized for the metallization process as well as supporting high-resolution printing. As a result, said Trexler, “it’s a pain in the butt to print on. The substrate is great for gold deposition, but terrible for everything else.” The company initially and unsuccessfully tried a xerographic process—“our printing was horrific,” he said—but a conversation with RadTech led Valaurum to switch to UV inkjet, which worked a treat. The company also leverages a digital printing workflow to add variable data; each Aurum features a unique serial number and QR code that launches a PURL verifying the legitimacy of that particular Aurum. There are other anti-counterfeiting and security measures built in, as well. UV inkjet printing allowed Valaurum to dramatically cut its production costs, even as sales increased 600 percent.

In addition to the Aurum, Valaurum also prints other gold-infused materials such as awards and certificates, and can gang these materials with the Aurum printing, maximizing efficiency. And, in a weird way, it has offered the company the potential to quite literally print money: Valaurum is about to present a feasibility study to the central bank of a South American country.

Other speakers looked at other applications and markets. Jennifer Heathcote, Regional Sales Manager for Phoseon Technology, a manufacturer of UV LED curing systems, offered an update on the penetration of LED curing in the various and diverse markets, from spot and area curing in product assembly, to the various commercial printing processes, to industrial printing. Despite the well-touted benefits of LED, mature, well entrenched markets—like certain types of industrial printing—are slow to adopt new curing technologies. In other markets, however, the main driver of the growth of LED curing is a simple one: lamp output continues to increase in power. “Higher power makes more applications practical,” said Heathcote.

In another session, Mark Driscoll of the Radiation Curing Program at Syracuse’s SUNY ESF (State University of New York, College of Environmental Science and Forestry) gave the details of an experiment he and his students conducted to see whether a UV coating could, quite literally, stop a speeding bullet. That is, could a UV coating be used to make bulletproof or otherwise impact-resistant materials. After applying and curing the coating on fiberglass panels, the challenge was actually getting to do the testing. Attempting to use the National Institute of Justice (NIJ) Type III standard for bullet resistance testing, Driscoll’s research team was unable to secure an outdoor location at the required 73°F temperature (winter, Syracuse) while all the indoor firing ranges—those operated by local law enforcement—were booked up. On top of that, the ammunition required for the test—lead semi-wadcutter bullets for a .44 Magnum—was not easy to come by. As a result, the impact testing had to be done using a drop impact tester that simulated the force of a bullet. And it worked; the UV coating resisted puncture at a force of 700 foot pounds. Naturally, said Driscoll, they would like to perform more tests—including the actual bullet-resistance test. 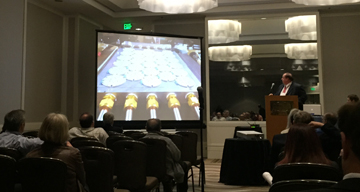 SUNY ESF’s Mark Driscoll presents the results of a study on a UV coating’s impact-resistance.

The final session of the day was a look at photoluminescence, conducted by Brian Peters, president of Allureglow, a manufacturer of pigments and UV-cured inks that make prints photoluminescent, or capable of absorbing and re-emitting light—or, in other words, making items “glow in the dark.”

The market for photoluminescent materials has been growing, particularly as improvements to the pigments makes them “charge” more quickly—in minutes—and glow for much longer—up to 45 days—than ever. The fastest growing market for photoluminescent printing is signage, specifically safety and egress—wayfinding—and especially as ongoing changes to local, national, and even international building and safety codes are increasingly requiring glow-in-the-dark signage. And since photoluminescence is a way of providing light without any external power source, such materials can be used in lieu of electronic signage. It can even be used on vehicles, and fire and emergency services is another fast-growing sector. Commercial print applications are also expanding, such as POP displays and other types of signage. Allureglow inks can be used on textiles, although are incompatible with dye-sublimation printing. Peters says that Allureglow can match any Pantone color “within plus or minus five percent.” They even have a black ink that glows in the dark.

UV.EB West 2015, which ran March 10 and 11 in Redondo Beach, Calif., was the best-attended event in the show’s history, drawing attendees from virtually all the disparate markets that UV and EB curing technology touches, from brand owners and consumer products companies, to packaging printers and converters, to expert chemists and materials scientists.