Bill Lowe, Father of the IBM PC, Dies at Age 72

William C. Lowe, who supervised the creation of IBM’s first personal computer and went on to hold executive roles at Xerox, NEBS, Moore and Gulfstream, passed away on October 19th. He was 72.

I was saddened to hear about the passing of Bill Lowe earlier this month. I had the pleasure of working with Bill during his tenure at Xerox in the late 1980s and early 1990s.  In 2007, I approached him about writing a book together.  The 25th anniversary of the launch of the IBM PC (August 12, 1981) had recently been observed, and there was a flurry of activity by various participants recounting many aspects of the story.  However, the story from inside IBM had never been told.  I thought it would make an interesting book.

Bill, always one for big ideas, wanted to broaden the focus to a methodology he had come to call Pragmatic Innovation, which he believed helped him bring to market a series of innovative products and services over his long career, beginning with the IBM PC.  The book was published in 2008 and is available on Amazon. The cover image shows him with Bill Gates in 1990 on their way to Los Angeles to be recognized by PC Magazine as being responsible for delivering the best hardware and software of the previous decade. 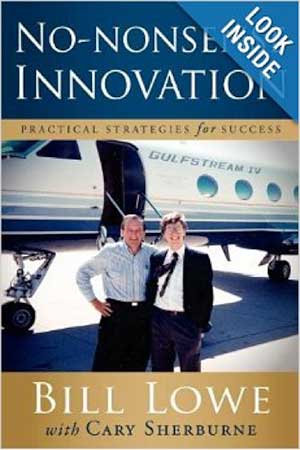 Having always been a sort of geeky tech groupie type and having grown up in Silicon Valley, I have always found the history and evolution of personal computing fascinating. It was an honor to spend time with Bill and hear directly from him how the IBM PC came to be.  Many of his stories are incorporated into the book.

One of my favorite stories from the book is the presentation of the PC concept to the Corporate Management Committee at IBM.  Consider that in 1980, there were no PowerPoint slides to be had (maybe that was a blessing!).  So standard procedure was to write information on a flip chart and take it to a local reprographics shop to have it reduced to hand-out size.  Bill had what was probably the only remaining copy of that handout outside of perhaps IBM archives. It included functional diagrams of the proposed PC and justification for its development.  It suggested that 240,000 units could be sold in the first four years, which would double the installed base of IBM CPUs. Of course, that was a little off. Some of those images are included in the book. Bill was planning to donate the document either to his alma mater, Lafayette, or to the Smithsonian.  I am not sure what finally came about.

Bill went on to be involved in an executive role in the launch of the Xerox DocuTech and the Gulfstream V, among other things.

Sometimes when we are in the middle of game-changing events, we don’t realize their long-term impact. I believe Bill had a vision of where the PC could take the company and the industry, but I don’t think anyone could have foreseen the ultimate outcome.  It certainly was a game-changer. And as The New York Times obituary points out, it introduced huge innovation to IBM and saw the beginning of the transformation of Microsoft and Intel from “obscure tech companies into household brands.”

I hope you will take a few moments to remember Bill and his many contributions over his lifetime.

Thanks for the article, Cary. I had not heard the news about Bill. I also worked with him at Xerox and am honored that I had the opportunity. Very sad news.