Canon USA’s new headquarters building has been years in the making, according to Joe Adachi, President & CEO of Canon USA. Built on 52 acres of what was once a pumpkin patch, the building and parking structure comprise 700,000 square feet and contain the largest Canon showroom in the world (12,000 square feet). After three years of building, the ribbon cutting ceremony was held recently and the company has moved from its previous Lake Success headquarters to its new digs. 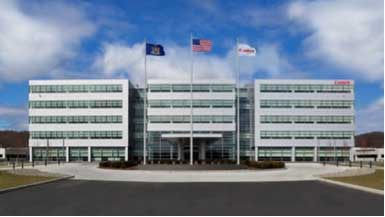 The building is impressive, as is the thought that went into making it not only a great working space for employees but a center that can be used for other purposes as well.  Canon executives invited ideas and suggestions from the 37 industry analyst and media attendees at a one-day media event as to other uses that might be made of the building and its facilities. This could include industry events, community activities, school visits and more.

Part of the reason Canon chose to build a parking structure instead of acres of parking lot was to protect green space.  The property contains eight acres of treed land with paved walking paths that employees are taking full advantage of to get some fresh air during breaks.  The property is planted with drought-resistant plants and the building has lots of windows for daylight harvesting.  The garage also has electric car charging units available. Canon indicates that the building is expected to be LEED Gold certified next year. The company is in the process of installing a fitness center for employee use and has designed the two wings of the building to make it easy for employees to move around the facility in inclement weather without having to be exposed to the elements.

Canon USA headquarters were previously located in three buildings in Lake Success and another building at a different location. This building now consolidates the population into one building, making it a more collaborative environment.  In fact, throughout the presentation, Canon executives emphasized that a key focus for the company is breaking down the siloes that formerly comprised the company’s various businesses in order to cross-pollinate and increase innovation.

I have to say right up front that this is a much more open and frank Canon than I have experienced in the past, and it is quite interesting to see the shift in messaging and culture that appears to be taking place. Mr. Adachi should be given credit for his leadership in this regard. Not only is the outbound dialog more open, but the company is emphasizing that it is listening—to the market, to its customers and to us (media and analysts) as it continues to evolve its strategies.

It’s All About the Image

Certainly, the new building projects a new Canon USA image, and the showroom is extremely impressive (more about that later). In terms of messaging, Canon has taken a hard look at its variety of businesses—from consumer and graphic arts to healthcare and scientific—and it is clear that central to all of its efforts are images.  The company thinks about its offerings in terms of input and output—capturing images and outputting them in some way, whether as physical or digital images.  In fact, from Canon’s perspective, it’s all about the image—and what happens to the image next.

And certainly, the company is projecting an image of innovation that is clearly not just about appearances. The company was #3 in U.S. patent assignees in 2012, behind IBM and Samsung, both much larger companies, with 3,174 patents issued. In fact, over the past two decades, Canon ranks #2 in cumulative patents issued, behind IBM. That’s pretty impressive.

With the Océ integration complete, Canon Americas now has nearly 19,000 employees in North, Central and South America, with approximately 2,400 of those employed by Canon USA and 6,600 by Canon Solutions America.  There are an additional 280 employees in its combined customer financing operations (CFS) and 4,400 employees in its FM business, Canon Business Process Services.

Adachi admitted that it is quite a challenge in an organization of this size and scope to integrate across the entire portfolio, but it is clearly a top priority, and if successful, is sure to deliver some interesting results. I also found it interesting in his discussion with us that he was shocked that no one in the room had ever attended the NAB conference (National Association of Broadcasters) or RSNA, the largest medical show in the world, and he urged us to step beyond the boundaries of graphic arts and experiences these important shows where many of the technologies being shown and discussed are or will become relevant to our industry. Luckily, a few of us have attended CES, the Consumer Electronics Show, which is also an important hotbed of innovative technology demonstrations. 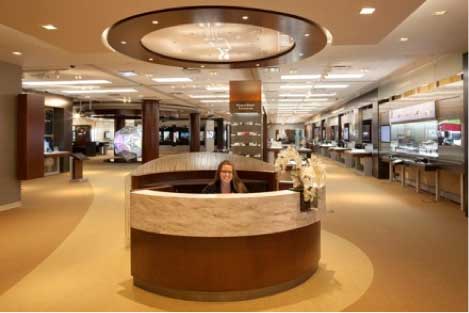 Now a few words about the showroom.  We started our tour in the Mixed Reality area, where Canon was demonstrating technology that goes way beyond augmented reality … and can be put to use for a variety of purposes.  Our own David Zwang offered to don the Mixed Reality headset and experience a virtual vehicle. I’ll let him speak for himself about the experience, but from the outside looking it, it was pretty amazing. We could see the car displayed on the screen change as he specified the color and type of vehicle he wanted (a blue convertible!).  I think he was ready to sign the order (for the car, that is, and maybe for the headset as well!)

This technology has significant industrial applications as companies (including auto companies) conceive of and design new products.  It will take significant time and cost out of the initial modeling processes and has implications throughout the life of the vehicle. It can, of course, have entertainment implications as well. As a side note, combined with 3D printing (which Canon is “looking into”) will be a revolutionary enabler for industrial purposes. I thought it was interesting that Canon was focusing on the industrial applications of this technology.  Much of what we have heard about augmented reality (and this is a form of augmented reality) has been more focused on marketing applications.

The showroom also displays color and black & white printing equipment, ranging from the Canon imagePRESS C7010VPS at the high end down (pictured below) to a variety of office and consumer printing devices. The showroom also features an Océ VarioPrint DP and PRISMAproduction workflow, evidence of the integration of the two companies.  The showroom also features wide format printers (also pictured below) including Canon imagePROGRAF products as well as Océ Arizona flatbeds and PlotWave and ColorWave roll-to-roll printers serving both the graphic arts and CAD markets. This includes the recently announced ColorWave 900 which was shown as a technology demo at drupa under the moniker Project Velocity. 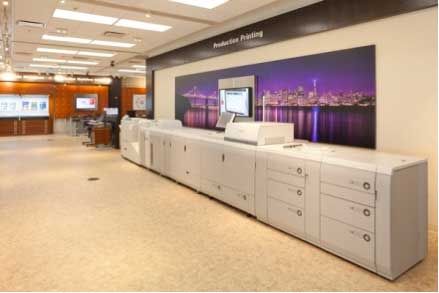 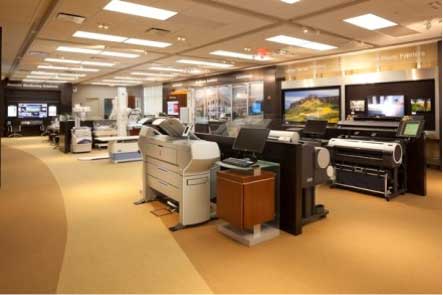 Cameras and photo printers are also a key highlight of the showroom, with everything from the simplest consumer model to security cameras and high-end professional and cinema cameras, and everything in between.  There is an interactive wall in the camera area that shows a timeline of Canon’s camera history and there are physical models of many of the older cameras on display. 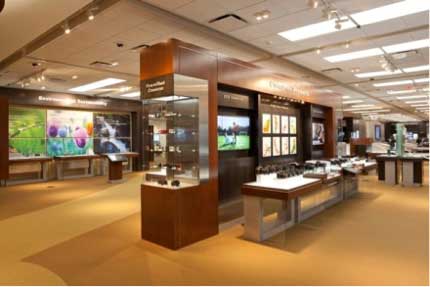 Also perhaps not as well known in our audience, Canon has a significant presence in the healthcare industry, ranging from scanning solutions designed to convert paper to electronic medical records, diagnostic devices of various types, including a complete molecular diagnostics solution that will also include DNA analysis that reduces DNA and other analytical work from days or weeks to hours. This is an example of leveraging several areas of Canon technology, breaking down the siloes to deliver breakthrough products.  There is an interesting video that explains how the DNA analysis works.  I can hardly wait to see this show up on the various iterations of CSI television programs! There are likely even healthcare applications for the mixed reality solutions that might be able to speed diagnoses and/or even eliminate certain invasive procedures.

Voice of the Customer

It is always an added value at these types of events to hear the voice of the customer, and Canon provided that added value by inviting Dave Johannes, Vice President of Digital Print and Mailing Operations at IWCO Direct. IWCO Direct operates out of three locations with 2,250 employees and is the leading producer of Standard A advertising mail in the U.S., producing over 4 billion pieces per year. Johannes spoke about his involvement with Canon. The company has been the first in the U.S. to install a number of Océ-branded products in the VarioStream, ColorStream and JetStream families and has worked with Canon on the development of a Premium Pigment ink set for production inkjet as well as being a beta test site for various products. He commented, “Canon’s willingness to partner on projects both large and small to help solve client challenges in a rapidly evolving market is invaluable.  Canon listens to their customers and works to bring timely, relevant products to market.”

Canon also plans significant “Voice of the Customer” visibility at Print 2013, with customer quotes and video interviews throughout its 13,500 square foot booth.

Canon will also have a few surprises for us at Print 2013.  Watch this space for more info as announcement dates arrive.

I think everyone who attended this event was impressed with the building, the outstanding showroom, but more importantly, with the new direction Canon seems to be taking. And maybe some of us will take Mr. Adachi’s advice and attend some shows outside of the printing space!