Following Ricoh’s announcement that it would not be participating in Ipex 2014, WhatTheyThink Senior Editor Cary Sherburne reached out to Ricoh Europe’s Graham Moore to learn more about this decision and Ricoh’s overall customer engagement strategy. 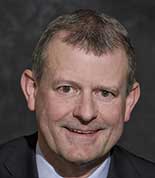 Although as late as October 2012 Ricoh had indicated it would have a large presence at Ipex 2014, the company has since determined that it will not be participating in Ipex 2014.  Although no formal announcement has been made, UK trade publication Printweek reported the decision on June 3rd, stating, “Ricoh has been confirmed as the latest digital vendor to be removed from the floor plan after deciding to cancel its 1,836sqm booking – which would have made it the second largest remaining exhibitor at the London event.” This follows withdrawals by Agfa, Canon, Heidelberg, HP, Kodak, Komori and Xerox, as reported earlier on WhatTheyThink. This leaves Konica Minolta with the largest mainstream exhibitor space at the show.

The run-up to Ipex has not been without challenges for show organizer Informa.  As if the move from the show’s 30-year tenure in Birmingham to new digs in London weren’t enough to deal with, Informa has also shifted the direction of the show to a “print-centric, multi-channel, thought leadership event.”

WhatTheyThink spoke with Graham Moore, Ricoh Europe’s Director of Business Development, to gain an understanding of what went into this decision as well as Ricoh’s overall strategies relative to customer engagement.

WTT:  Graham, thanks for speaking with us.  Can you give us some insight into what went into the decision to pull out of Ipex 2014?

GM:  First, let me say that this was not an easy decision. As part of a review and evaluation of our activities, we had extensive discussions with customers and potential customers to get their feedback on the various approaches we might take in the customer engagement process.  This covered face-to-face opportunities as well as a broad range of other activities.  As we do with any and all aspects of our customer engagement strategy, we considered this decision very carefully.  Based on customer feedback and other considerations, we felt it was the right decision for us for 2014.

WTT:  Is this a longer term decision about Ipex or just about Ipex 2014?

GM:  We are keeping an open mind at this point about participation at the next Ipex. We remain aligned with the goals and intent of an event like Ipex.  This is especially true with the way the show has recognized the fast-changing needs in the market and is adapting itself to meet them, adding more focus on multichannel and cross-media, as an example. These are things that will help customers and potential customers adapt and change and transform their businesses to encompass the new products and services they will need to provide to be successful in the future.

WTT:  Can you talk to us about Ricoh’s participation in trade shows overall?

GM:  We have already participated in a number of events this year. This includes events such as Hunkeler Innovationdays in Luzern, Grafitalia in Milan and Printtek in Turkey. We had a successful North Print & Pack in the UK, and exhibited at Graphitec in Paris. We are planning participation in a number of other European  events through the balance of the year. For example, we have committed to PODi Europe. We still see trade shows, conferences and exhibitions as an important part of our mix.

WTT:  Some folks argue that Ipex is a regional—not an international—show.  What is your position on that?

GM:  We certainly think of Ipex as an international show, and we were very pleased with the last Ipex. The profile of every international show is not the same; each tends to have its focal audience and strong attendance from the local market. That’s also the case with drupa. But for many of the shows, we are seeing compressed timelines for the shows themselves and, generally, fewer people from each company attending.  Attendees also seem to be spending less time at these shows than in the past.

WTT:  I know that a number of other vendors have shifted some of their focus to dedicated events with customers and prospects, often held at their demo centers or local facilities.  What is Ricoh’s strategy in that regard?

GM:  Of course, we are leveraging those venues as well.  As you know, we have our larger Innovation Centers, such as the one we operate in the U.S. as well as other regions, and local showrooms in the smaller locations.  Keep in mind that in Europe we are dealing with a broader set of differences from country to country, not the least of which is language.  For multinational enterprise customers, English serves well in a number of countries.  But for commercial print or graphic arts customers who may not be doing business internationally, they—justifiably—expect to be able to communicate in their native language. In those cases, it makes more sense to do local events that can be conducted in their native tongue. We run very successful open houses.  Most recently, we hosted one in The Netherlands that was attended by hundreds of commercial print and corporate production print clients and prospective clients. These events are essentially executed at a local level, with support and content development from my team in our European headquarters.

WTT:  What are some of the other things you are doing encompassed by the “broad range of activities” you referred to earlier?

GM:  We believe there are many ways to engage customers and prospective customers in addition to face-to-face engagement.  These include things like our Business Driver Programme, social media, the Production Printing blog, web sessions and many other ways you can communicate with people through multiple channels and in real time without asking them to travel a long distance and with as little disruption to their business and productivity, at whatever level in the organization the customer is. This is the same way our customers are dealing with their customers. Especially as things have gone more digital, there is a lot more that can be accomplished through these means and at a local level, including proof of concept for investment decisions, and with more focus than you might normally be able to achieve at a large trade show event.

WTT:  Ricoh was an early adopter of web video conferences, at least for journalists.

GM:  One of the nice things about web conferences is the fact that we can track engagement, and follow up based on what they might subsequently download or view.  The key is to be agile and adapt what we do to meet them and engage with them at the time of day and through the channel and language they prefer.

WTT:  For Ipex, there has been a significant amount of change to deal with, both in the location and in the focus of the show. That can’t be easy.

GM:  I think it would be fair to say that it was the consensus of the people involved, including other significant industry players, that the event needed to change, adapt and position itself in a different way. Part of that was the location. Because it is an international show, London offers many opportunities for visitors that were not necessarily available in Birmingham. They also compressed the duration of the show to reflect shorter attendance times by participants. The downside of that, especially for the “big iron” manufacturers, is that it can take longer to set up these machines than the actual duration of the show.

WTT:  It’s also true that while the printing engine, be it offset or digital, is important, there is so much more to acquiring a new press than simply choosing a press and installing it.

GM:  Absolutely.  That’s why we have an increasing focus on the total solution. We continue to invest heavily in workflow software and services to augment our broad portfolio of hardware, from cut sheet to continuous feed, and feeding and finishing solutions. People increasingly expect you to be prepared to talk to them about their own specific business challenges and show their applications rather than a generic demonstration they could get anywhere. And it’s hard to do a real proof of concept at a large trade show.

WTT:  Anything you would like to add in closing?

GM:  We continue to remain open-minded about events this year and into the future.  We will determine on a case-by-case basis what is the right approach given what customers tell us and how we can best respond to their needs and feedback at the time.