Look Into the Light: Miracle Cures On The Horizon

Richard Romano talks about UV printing from a technology standpoint, identifies where LED technology fits into the overall scheme of things, and looks to see what the future may hold for it.

Earlier this week, in a story about EFI, I wrote about the company's LED-based wide-format printers. In this feature, I want to take a step back and put LED-based curing in perspective, and discuss UV printing in general. So let's talk a bit about UV printing from a technology standpoint, and identify where LED technology fits into the overall scheme of things, and look to see what the future may hold for it.

Back to the Future
OK, that's probably one of the most overused subheads in the history of technology writing, but back in March 2011, when I covered the Print UV Conference for WhatTheyThink, I called UV printing "perhaps one of the oldest new technologies in the industry." That is to say, printing with inks that are cured (aka "dried") by exposure to ultraviolet (UV) light is not especially new, as web offset presses have used UV-curing equipment for decades; UV inks were a replacement for heatset inks, although expense had long relegated UV ink to specialty graphics printers. (A related technology is electron-beam [EB]-curing.)

Here's how it works, and hunker down for some Chemistry 101 (well, maybe 102). The UV ink vehicle (the fluid portion of the ink that gets the colorant, or pigment, to the substrate-like, well, a vehicle ostensibly gets a passenger to his or her destination) comprises fluid oligomers (molecules that consist of a few monomer units, unlike polymers-such as are found in plastics-that can consist of almost unlimited monomers) and initiators that, when exposed to ultraviolet radiation, release free radicals (extremely reactive atoms or molecules that can destabilize other atoms or molecules an start rapid chain reactions) that cause the polymerization of the ink vehicle, which hardens to a dry film containing the pigment. (Think of "polymerization of the ink vehicle" as not unlike your own vehicle getting stuck in an endless traffic jam, where the color of your car seemingly hardens onto the surface of the freeway.)

Ultraviolet light, or ultraviolet radiation (light is just radiation, after all, with visible and ultraviolet light just small portions of the much larger electromagnetic spectrum) is that portion of the electromagnetic spectrum (EMS) that has a wavelength between 4 and 400 nanometers (nm). As the name indicates, it falls on the EMS just beyond the violet end of the visible light spectrum (the wavelength of visible light ranges from about 380 to 740 nm). Ultraviolet light is often erroneously referred to as black light. UV light is invisible to humans, and in fact to most animals, but some insects such as bumblebees can see UV light. Flowers and bug zappers use insects' ability to see UV light to lure bugs to either pollen or death, respectively. Humans are sensitive to UV radiation, as anyone who has ever had a suntan or sunburn-or a melanoma-can attest. 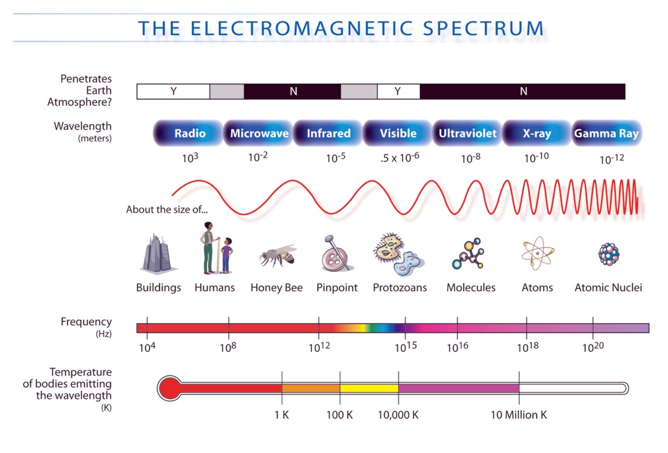 Visual representation of the electromagnetic spectrum; note the location of visible and UV light in the grand scheme of things. (Image via NASA.)

So, in UV printing, the special UV ink is deposited on the substrate and is then exposed to UV light via a mercury vapor lamp. As its name indicates, such a lamp produces light by passing an electric arc through a cloud of vaporized mercury. The lamp produces UV light, as well as visible light and heat. (Mercury vapor lamps are also used as streetlights, among other light sources, with special insulation to keep the UV portion of the output at bay.)

UV printing is used in both offset and, more recently, inkjet wide-format printing. A jaunt around the show floor at SGIA last month found most, if not all, the flatbed units on the market UV-based. And we'll see in a moment why that might be.

Why Should You Care?
Well, there's no earthly reason why you should, but the "killer app" for UV printing is that the process cures the ink very very quickly. Unlike conventional offset or inkjet inks that dry by a combination of penetration and evaporation of the vehicle, UV inks don't need to penetrate into the substrate, which means they can be used on all sorts of substrates previously hostile to printing, like plastics, metals, vinyl, foil, paperboard, and other specialty substrates. It also means that you can get more vibrant colors (muted color is often a result of that penetration into the substrate-if you have ever run plain paper through a desktop inkjet printer, you have seen this in action). There are also said to be environmental benefits to UV printing, as UV inks lack the volatile organic compounds (VOCs) that conventional solvent-based inks use. (Inks that dry by evaporation need these volatile solvents-"volatile" means "evaporating readily at normal temperatures and pressures" after all-in order to foster ink drying.) Not all VOCs are toxic or hazardous (scents and odors are technically VOCs), but those used in printing inks and other industrial applications can have long-term health effects (i.e., bad ones) and are thus heavily regulated. UV inks obviate these problems by containing no-or only extremely minute amounts of-VOCs. Now, whether this adequately supports the "green" claims of UV printing is a bit murky, but we'll concede the point for the nonce. Press operators also need to be careful around UV curing equipment-again, UV light causes suntans, sunburns, and skin cancer.

See A Little Light
UV printing has opened up entire new markets and exciting new applications for printers wide and small, but there still remain limitations to UV printing as it currently stands. The mercury vapor lamps used for UV curing generate a considerable amount of heat, since they produce a large gamut of radiation from the UV through the invisible to the infrared portions of the electromagnetic spectrum. And infrared radiation includes thermal radiation-aka heat. This means that thin plastic substrates, films, and so forth can be subject to distortion, melting, or discoloration. So what we need is a type of UV ink curing that doesn't generate heat, or not enough heat to damage the substrate.

Enter the LED, or "light-emitting diode." Now, again, the LED is nothing new. The basic principle behind it was discovered in 1907, and the first LED was created in the 1920s. Commercialization began in earnest in the 1950s and 1960s, and anyone who has had any electronic device with some sort of indicator light has seen an LED in action. An LED generates pulses of light by (OK, some more chemistry, this time physical chemistry) injecting or removing pulses of electrons. As electrons are removed from the diode, they create gaps in the atoms from which they were forced. Newly arriving electrons rush in to fill those gaps and as they do so, stimulate the emission of light. Mind you, that light can either be visible or infrared. In fact, the handheld remote controls for your variety of household appliances and devices use infrared LEDs. But manufacturers can more carefully determine what type of light a given LED emits.

LED lighting is being looked to as a much more efficient lightbulb technology for interior and exterior lighting than incandescent and even compact fluorescent bulbs, and are starting to appear at more and more attractive price points for the consumer market.

For our purposes here, LED lamps are emerging as a compelling alternative to mercury vapor lamps as a way of curing UV ink. The development of high-power UV LEDs in the 1990s has spawned a new way of curing ink that has the same benefits as traditional UV-quick curing, the ability to print on many substrates, etc.-but removes that chief problem: the heat. As a result, LED UV is often referred to as "cool cure" technology, and, as mentioned earlier, expands even further the types of substrates that can be printed on. LEDs are also a bit more environmentally friendly (the lamps don't use mercury, do not generate ozone, and are far more energy efficient). LED lamps also last much longer than mercury vapor lamps.

LED printing is not perfect, of course. The LEDs only generate UV light in a very narrow range of the overall UV spectrum, which can result in incomplete curing, although inkmakers have been addressing this problem. There is also the higher cost of LED systems, as the economies of scale have not kicked in yet. But expect that to change. More and more vendors-Fujifilm Roland DGA, Mimaki, and of course EFI-have LED units on the market, and I expect more to follow suit.

It's All About the Apps
As a technology, LED UV further expands the applications and types of products that wide-format print providers can create for their clients. And as the technology begins to expand further into the industry, with new models improving upon price and performance, we will see even more creative niches being pursued and more opportunities emerging.

http://en.wikipedia.org/wiki/Nick_Holonyak
Nick Holonyak Jr. is the father of the LED Light.

Sheetfed UV came about in the 1960's and worked well especially for packaging.
LED UV works at slow speeds and has had no sucess for litho sheetfed. The price of the system is not all that bad but inks are many times what one would like to pay. Sheetfed litho UV is years away if it is doable.

http://www.youtube.com/watch?v=aVPfYFAIREA
LED printing in Sheetfed Litho is happening faster than most people realize due to recent innovations. LED UV inks are now priced similar to straight UV inks and are available from a growing number of manufacturers. There are now dozens of installations throughout Asia, and the first LED presses in Europe and the US were commissioned this year. Look for LED printing to continue growing in 2013 and beyond as the equipment is easily retrofitted, the light produces no heat to the sheet, and it saves time, energy and reduces the carbon footprint.