In Part 2 of our pre-drupa series, our coverage of drupa Week in Düsseldorf, Germany, continues, including the following companies:

In a surprise announcement, KPG announced its intent to acquire RealTimeImage's graphic arts business. KPG already incorporates RTI solutions in its Matchprint Virtual Proofing System. This acquisition will allow RealTimeImage to focus its efforts on its medical imaging business. RTI's Yehuda Messinger, Executive VP of Graphic Arts, and RTI's Graphic Arts employees, including sales and technical support staff, will become part of KPG and will continue to support all of RTI's many customers and partners as well as its core product set, including:

Products will continue to be offered under the RealTime brand. Jeff Jacobson, KPG's CEO, indicated he expected the deal to close by the end of February and declined to provide financial details (both companies are privately held). RealTimeImage will gain significant benefit from KPG's financial and business infrastructure and we expect to see even more aggressive offerings from the combined companies.

KPG also announced a new corporate message around which it align its organization as well as its drupa efforts: Ideas Creating Opportunities. According to Jacobson, customers often do not understand the breadth of KPG's offerings. The company intends to work backwards from the market to provide a deep, all-encompassing partnership between KPG and its customers by staying close to customers, understanding their challenges, anticipating their needs and delivering solutions, thus demonstrating that KPG is a very different company from even two years ago. Jacobson indicated that KPG has made significant R&D investments in all areas of its business, including $300 million in CTP alone. As a private company, he declined to provide a percentage of overall revenues devoted to R&D. He also stated that some 25% of KPG's 4,000 employees have direct customer contact.

Additional drupa announcements for KPG, who will be located in Hall 5, include: 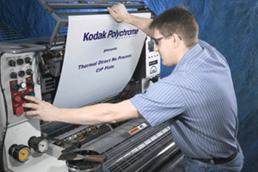 Jacobson also restated KPG's commitment to thermal versus other types of imaging systems, although he indicated KPG is monitoring the other technologies, and stated that it would not be unreasonable to assume that KPG might have a violet plate offering within the next couple of years.

Having recently been acquired by Agfa and now part of Agfa Graphic Systems, dotrix, headquartered in Ghent, Belgium, shared its drupa strategy with the 100 media representatives gathered in Düsseldorf the week of January 26th. Rob Haak, Dotrix CEO, was joined by Etienne Van Damme, Agfa's Manager for Business Development and Stijn Simoens, dotrix Director of Marketing.

Haak described dotrix as a pioneer in single-pass inkjet implementations. The company, which will be operated as a wholly-owned subsidiary of Agfa, has 75 employees, a full half of whom are in research and development. The company has expertise in systems for printing security documents, including currency, and decorative printing, and has 200+ customers in that space. Its industrial inkjet product, the.factory (the dot factory) has a few installs and is designed to print on a wide range of substrates, including folding cartons, PVC, vinyl, aluminum, wallpaper and more, using noncontact drop-on-demand technology. dotrix showed a prototype of the.factory at drupa 2000, installed its first pilot site for decorative printing in early 2002, and launched the product commercially at IPEX 2002. dotrix is also providing the technology to OEM Mark Andy integrated with its DT2200 solution. The company's primary target markets include:

the.factory is designed to handle test marketing run lengths as short as 1 or up to 1,000 with an extremely short delivery time. As in other areas of the printing market, packaging run lengths are declining, and dotrix maintains that 30,000 units is a typical packaging run length in today's environment, a quantity that the.factory can produce in one hour. The company views the product as bridging the gap between digital and conventional printing, and as complementary torather than competitive withtraditional products, extending the range a service provider can offer. dotrix sees its primary competition as the HP Indigo WS4000, the Xeikon DCP500 and the Superjet class of wide format devices.

Clearly, the acquisition of dotrix by Agfa will provide the company much needed working capital and improve its cash flow position. Additionally, dotrix will benefit from Agfa's distribution channels. In his remarks, Agfa's Van Damme stated, Unloading Chromapress was not a reflection of a lack of belief in digital printing, but a painful decision that had to be made. dotrix heralds Agfa's reentry into digital production printing, and I believe it is a better entry than we had before. It also strengthens Agfa's offering in the packaging market. I am convinced that dotrix is going to SPICE up Agfa's life.

At drupa, dotrix will be showing a complete converting line that combines the.factory with a Jumbo unwinder and sheet cutter. Additionally, the company will feature a special implementation of Agfa's ApogeeX workflow tuned to packaging workflow, and is in the process of developing JDF compatibility for its products. The base the.factory sells for €1,150,000 in its 4-color, 63 cm format, and €935,000 in its 35 cm format.

Fujifilm was represented by Nobuyuki Hayashi, Director, Executive Vice President and member of the board of FujiFilm Co. Ltd.; Naohiro Fujitani, Deputy General Manager, Graphic Systems Division; and Nobuaki Inoue, Deputy General Manager of Fuji's Graphic Systems Division. Key strategies for the Graphic Systems Division include strengthening of its distribution channels and enhancement of its worldwide marketing efforts, as well as further investment in CTP manufacturing facilities worldwide. The company is adding product lines and/or facilities in China, Greenville SC and the Netherlands. The major focus of its R&D initiatives is color management solutions and CTP, with an intent to strengthen its technology offerings for both commercial and newspaper applications as well as the development of a standard processless plate for the next generation of CTP platemakers.

Fujifilm's tagline for drupa is Imaging Advantage with Fufifilm, aligned with the company's mission to provide customer advantage through its portfolio of products and services. The company will occupy more than 1,100 square meters in Hall 5 at drupa, with several zones:

Fujifilm's color management offerings are designed to be device independent, which Fujifilm categorizes as a must-have in today's digital workflow environment. The company will also be showing a new Fujifilm Celebra workflow that includes an Adobe RIP, Enfocus advanced certified PDF support and improved PDF imposition capabilities, also showcasing an RGB workflow that eases the transition of digital photographs through the production process, a common theme from a number of vendors during drupa Week.

When questioned about the state of its scanner business, Fujifilm indicated that reasonable quantities were still shipping, although the business experienced 25-30% declines over the last two years, largely due to the increasing prevalence of digital cameras. Fujifilm plans to continue to produce scanners for several years to come, and indicated scanners will have a prominent position at its drupa stand. Fujifilm is still investing in its scanner business, continuing to reduce the cost, evolve its color scanning technology within the software, and pointed out that it makes sense for them to stay in the business as other suppliers are discontinuing their scanner product lines as long as there is still a demand.

Our coverage of drupa Week will continue, so watch this space!