HP is upping the ante in the inkjet game with the new T400 Color Inkjet Web Press announced today during a press event being held at Los Angeles based O'Neil Data Systems. With a 42” web width, the T400 offers more than just raw speed, promising to be a game changer for several target markets.

When a new piece of hardware is introduced in the printing industry, the tendency is to ooh and aah over feeds, speeds, bits and bytes. And we will certainly do that in this article covering the introduction of HP's T400 digital production inkjet press.  In fact, let's get that out of the way right now, and move on to what this new press means to the industry. The table below summarizes the press' bona fides. It should be noted that the T400 is actually a few feet shorter than the T300 due to some changes in the paper path and the drying mechanism. The T300 is 71.7 feet long.

You can hardly help but say “Wow!.”  But wait, there's more, as the late Billy Mays might have said.

First, a word about O'Neil Data Systems, our host (along with HP) for this media event. O’Neil Data Systems was founded in 1973 by William J. O’Neil to produce time-sensitive investment research publications from his extensive database on publicly traded companies. Today, O'Neil is recognized as a leader in technology-driven marketing communications services, repurposing, producing and delivering millions of time-sensitive documents in both electronic and paper media.

O'Neil was an early adopter of the HP T300 inkjet press (30” web width), and was the first field upgrade to the T350 for more speed.  The company also has the T200 (20” width) and the T400 (42” width) on the production floor, reflecting the entire HP production inkjet portfolio. All of the presses have been operating in revenue-producing production mode during O'Neil's peak season. And the company has the growth trajectory to support all of these engines moving into the future.

“We have an interest in protecting our customers' investments... that includes not penalizing early adopters. As we continue to innovate, we work hard to make sure that new capabilities are field-upgradeable to the extent possible.” - Scott Schiller, HP

Although the capabilities discussed here are new with the introduction of the T400, which has a 6-month build-to-order delivery lead time at launch for North America and a 7-month lead time for all other regions, HP indicates that many of these innovations will be applicable across the entire portfolio. “We have an interest in protecting our customers' investments,” said Scott Schiller, Director, Marketing and Business Development, Inkjet High-speed Production Solutions for HP. “That includes not penalizing early adopters. As we continue to innovate, we work hard to make sure that new capabilities are field-upgradeable to the extent possible.”

In addition to its 42” web width (41.75” print width), the T400 introduces three drying options, depending on average ink coverage. Float IR dryers use a combination of medium wavelength IR lamps and hot air convention to create a dryer that is approximately 20% more efficient than either technology by itself.  The press can be designed with either one, two or three dryer zones per engine.

Other options include a zero speed splicer.  Schiller explained that depending on paper thickness and print speed (400 fpm or 600 fpm), a roll of paper can last anywhere from 30 to 90 minutes.  Normal manual roll change-over time is about 10 minutes.  In order to minimize this downtime, HP is introducing a roll splicer, similar to what is already in use in offset web presses.  For offset web presses, the splice is made and the press continues to run during that time.  In the case of the T400, because of the small tolerances between print head and substrate, to prevent potential head crashes and to offer an opportunity to perform maintenance (largely cleaning) on the heads, the operator must jog the splice through. The automatic maintenance takes place during the jog-through of the paper and the combined activities save about seven minutes of downtime per roll changeover.  That is the equivalent of up to 36,400 letter-sized images of production for every roll of paper. 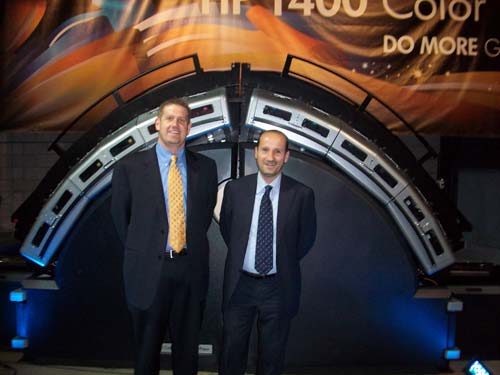 HP is also  developing  a Turret Rewinder solution; another offset web press technology, that allows a roll to be offloaded from the rewinder for near-line or offline finishing without interrupting production. This can be done at any point in the run without waiting for the rewind spool to fill.  For example, it can be done at the conclusion of a job so that job can be moved on to finishing or other processes without any waiting.

The automatic maintenance takes place during the jog-through of the paper and the combined activities save about seven minutes of downtime per roll changeover.

MICR is another option on the T400. Unlike some other digital printing MICR solutions, with the T400, MICR is applied only to the MICR line that needs to be read.  Some other solutions include the magnetic ink component in the black ink, meaning the more expensive MICR is used wherever black ink is required.

The HP Inkjet Web Press MICR solution enables direct and transactional mail printers to use only one pass to produce balance transfer check mailers, rebate check mailers, and other popular direct mail products. This method avoids the significant document security and inventory storage demands with existing workflows, which require valuable MICR documents to be pre-printed and then locked away, with additional finishing, inserting or full-color printing  completed in subsequent steps just prior to mailing

Beyond Feeds and Speeds

For the T400, HP is targeting specific markets and applications. These include books, direct mail, transaction, newspaper and high volume commercial printing.

The wider web width offers a number of interesting benefits depending on the application being produced. For example, a 30” web equipped with a Muller Martini inline solution enables a 16-page 6x9” or 7x10” book signature.  With a 42” web, this 16-page book signature can be extended in size to beyond 8.5x11”. This, combined with raw speed, significantly increments the number of books that can be produced per hour and raises the breakeven point between offset and digital, likely with the result of pulling more book printing volume into the digital world.

...we are likely to see more color interspersed into book blocks more economically than was possible in the past.

Also for book printers, the addition of a Magnum Flexbook, already 42” wide, allows the creation of a bonded book block. It slices the web into ribbons, stacks output into loose sheet stacks, and applies a bead of glue to bond the pages for shuttling into the binder either through an inline or hand-fed nearline process.

As more book printers adopt inkjet technology, and more publishers become aware of the capabilities, we are likely to see more color interspersed into book blocks more economically than was possible in the past. This will likely have an impact of the large number of monochrome engines installed around the world for digital printing of books as book printers look to upgrade their fleets.

For transaction or direct mail printers, the ability to place four 8.5x11” images across the 42” web will also significantly increase throughput. For shops with 20” finishing equipment, the T400 can be equipped with a slitter that allows two 20” jobs to be imposed in parallel, and then slit at rewind for feeding into the respective 20” post-processing operations.

Built in to the HP Inkjet Web Press family is a process prior to inking that disperses a bonding agent onto the substrate using inkjet heads.  Envision four layers (CMYK) or 5 layers (CMYK+MICR) flattened into a single image.  Bonding agent is not flooded across the entire page, but only jetted onto areas of the substrate that will receive ink using this “flattened” image. This allows the water-based ink to adhere to the surface of the sheet without wicking into the substrate. This inline process means that the press does not require special or pre-treated substrates to deliver the high quality that is expected from today's inkjet presses. Substrates ranging from 40 gsm (tissue weight) to 200 gsm are standard fare, but an optional configuration is available to handle up to 350 gsm (or 16-point stock). HP indicates that newsprint can also be run through this press and that newspaper applications are also being explored. HP reports excellent results on lower grades of paper such as newsprint, with Schiller stating, “The reality is, the lower the quality of the paper, the greater the positive impact of the bonding agent. Bonding agent helps to minimize the amount of show-through while maintaining high optical density.”

It is quite interesting to note the speed with which HP is bringing new inkjet developments to market.  HP introduced a concept press at drupa 2008, introduced the T300 at Print 09, announced the T200 at IPEX 2010, the T350 at Graph Expo 2010, and, of course, the T400 this week. The company's scale and focus has enabled it to deliver the T200, T350 and T400 as well as MICR all within one product launch window. With the entire product family on display and in revenue-generating production at O'Neil, this is quite an achievement.

In addition, within this rapid development cycle, HP has done a nice job of incorporating customer feedback into this next iteration of its production inkjet printing solutions, taking digital production to a completely new level.  The company has also ensured the ability to retrofit these new innovations to previously installed presses, taking the guesswork and risk out of making the decision about when to invest, as demonstrated by the fact that O'Neil was the first T300 install, and today is the first T350 install as a result of a field upgrade to its existing T300, By incorporating proven, existing technologies that the offset world is familiar with (e.g., roll splicing, turret rewinder, inline slitting, etc.) HP is likely to speed up movement of more impressions from traditional offset processes to highly productive and efficient digital ones, especially in the areas of mass customization and personalization, raising the crossover point between offset and digital even more. Over the next two days, HP is also holding a customer event at O'Neil where a number of customers will get a first look at this behemoth. HP is targeting the product at high volume commercial printers and continues to explore a number of unique applications on behalf of its customers.

While everyone agrees that offset printing is not going away anytime soon, the introduction of the T400 certainly increases the addressable volume of analog images that can be migrated to digital, bringing with that migration the ability to convert more applications to variable data, print on demand and other digital differences. Is this truly a game-changer?  We shall see.