Graphics of the Americas 2011 Heads North to Orlando; Increases Focus on Wide-Format

Next week’s 36th annual Graphics of the Americas show, colocated with FESPA Americas, increases its focus on educational programs for present and prospective wide-format service providers. The show also retains its focus on traditional printing, as well as content creation via the colocated Cre8 Conference targeted to graphic designers and publishers.

The 36th annual Graphics of the Americas (GoA) show pulls up stakes—albeit temporarily—and heads north from Miami Beach to Orlando, where it will occupy the Orange County Convention Center next week, February 24–26. The show will feature its traditional mix of conventional and digital printing applications, with a few new wrinkles.

Most conspicuous is the colocation of Graphics of the Americas with FESPA Americas, as well as—in a separate hall—Imprinted Sportswear Shows’ (ISS) The Solutions Event, highlighting textile printing and other decorated apparel. “They [ISS] have an Orlando show every year, and they scheduled this year’s on top of us purposely,” says George Ryan, Graphics of the Americas president. Wide-format and its universe of applications—including textile and garment printing—have long been a feature of Graphics of the Americas, but this year have become more of a focal point. “We’ve always had wide-format, although we didn’t always support it with educational programs,” says Ryan. “That’s the difference [this year]. Although the footprint for wide-format on the show floor is only slightly bigger than previous years, this year we’ve kept it in one area.” GoA’s wide-format educational sessions range from production issues, to selling wide-format output, to finishing and more.

Birds Eye View at Graphics of the Americas 2010 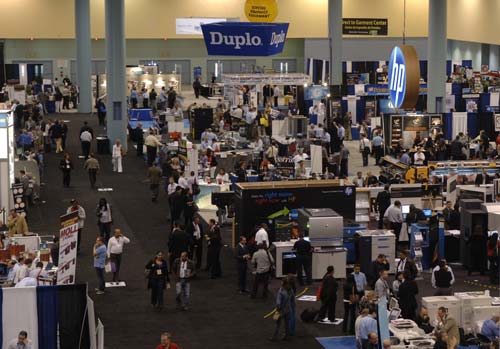 The emphasis on wide-format applications, both in GoA’s own programs as well as in FESPA’s, has come in response to increased interest in wide-format equipment on the part of commercial printers. “That’s a good opportunity for our members,” says Ryan, who also serves as president of the Printing Association of Florida (PAF). In particular, FESPA’s focus on educational programs and unique workshops is a good fit with GoA’s own sessions.

“I think there’s a better attitude by printers, and printing and publishing technology vendors. They see the light at the end of the tunnel, and they’re starting to buy equipment again.” —George Ryan, President, Graphics of the Americas

GoA offers 80 sessions that run the gamut of prepress, traditional printing, digital printing, sales and marketing, and workflow issues, as well as some newer “beyond print” sessions, such as “Social Media: Expanding Your Digital Footprint,” “A Printer’s Guide to New Media Revenue Streams,” and “SEO 101: How to Get Found on Google (and other search engines),” to name but three. Given its traditionally strong attendance by graphic communications professionals from Latin America, Spanish sessions have long been an important component of GoA, and this year the number of Spanish sessions has been upped to 16, with one new session focusing on flexography. “A lot of printers from Latin America and the Caribbean are combination [offset and flexo] shops,” says Ryan.

Every GoA features a compelling keynote speaker, and this year’s keynote is John Bracken, director of digital media for the Knight Foundation. Mr. Bracken directs the Knight Foundation’s News Challenge, “a media innovation contest that aims to advance the future of news by funding new ways to digitally inform communities.” Bracken’s GoA session, entitled “Inspiring Digital Innovation,” will discuss some of the cutting-edge projects that have come out of the News Challenge, and will offer a look at what the future holds for media, advertising, publishing, and society. The keynote session will take place Thursday, February 24, at 9:00 a.m.

On Friday, February 25, WhatTheyThink will be sponsoring a “Green Roundtable” at GoA, hosted by this writer, that will discuss many of the issues and best practices involved in environmentally sustainable printing.

GoA offers 80 sessions that run the gamut of prepress, traditional printing, digital printing, sales and marketing, and workflow issues, as well as some newer “beyond print” sessions.

As in previous years, Graphics of the Americas also features the Cre8 conference targeted toward graphic designers, publishers, and other creatives. The sessions that comprise tutorials, tips, and tricks for top applications like Photoshop, InDesign, and Dreamweaver complement those that focus on cross-media workflows and other newer design applications, such as “Moving From Print to Web,” “Email Marketing: Designing Effective Email Campaigns,” “How to Make the Most Out of CS5 Live (Cloud Computing),” and more. Each day of the conference will include a drawing for a complete package of the Adobe Creative Suite 5, courtesy of Adobe.

One consequence of GoA’s move to Orlando from Miami Beach is the absence of the traditional South Beach Party that marks the end of the conference. Instead, Friday night, show organizers will be offering attendees the opportunity to visit and have dinner at Disneyworld’s Epcot Center. “We’ll be the only ones there,” says GoA’s Ryan. Cost for the event is $65, and attendance is limited to 500.

According to Ryan, the move north has been pretty seamless, even given how long GoA has been in residence at the Miami Beach Convention Center. “Understanding a new venue has its challenges, but there are great things about Orlando. Hotel rooms are very cheap. Most attendees can get rooms for under $100 a night.”

As a result of the “Orlando effect”—or perhaps the sense of an improving economy—booth space is up 18% over last year and preregistrations are up 10%.

“I think there’s a better attitude by printers, and printing and publishing technology vendors,” says Ryan. “They see the light at the end of the tunnel, and they’re starting to buy equipment again.” And they’re looking for education and guidance. “We put good educational sessions together and people keep coming back.”

WhatTheyThink will be reporting live from Graphics of the Americas and FESPA.

How would one go about getting some of the information from this show. In particular training your existing Commercial Color Sales Reps to Sell Wide Format.