For the first time ever FESPA Americas will be held in the United States. FESPA has existed for almost 50 years, and this years’ event promises not to disappoint. Richard Romano has laid out all the details you need to learn more about the organization, the event and its history.

This February, FESPA—a worldwide non-profit federation of digital wide-format and screen printing trade associations—makes its debut in the United States. FESPA Americas 2011 will be held in conjunction (or “colocation”) with the annual Graphics of the Americas show, February 24–26, 2011, at the Orange County Convention Center in Orlando, Florida. This is the first U.S. show for the nearly-50-year-old organization.

FESPA Americas 2011 aims to introduce the organization to the American printing community. The group already comprises 26 European associations and 10 associations outside Europe (including Mexico), and engages with more than 100,000 printers around the world. FESPA organizes dozens of events around the world; its European Congress will be held in Brussels, Belgium, on November 19; FESPA Digital is slated for May 24–27, 2011, in Hamburg, Germany; FESPA Mexico comes to Mexico City next August; and FESPA Asia will be held in Singapore in October. The FESPA Events page on the organization’s Web site includes the full roster of events.

Membership in FESPA is typically through a national or regional printing association, although individual shops are welcome to join, and a number of U.S. shops are already members. FESPA has been working with U.S. associations such as the Printing Association of Florida (PAF), the organizers of Graphics of the Americas, and is hoping to expand its reach in North America.

According to the organization’s vision statement, “FESPA intends to be the leading global screen and digital imaging brand and connected community. We will achieve this by delivering world class, value added, inspirational, innovative, unique and high quality events and solutions, to enable effective re-investment of knowledge and resources. We aim to do this in a financially and environmentally responsible, supportive and efficient manner.”

Led by a 20-member steering committee of manufacturers, printers, and others involved in the industry, FESPA’s primary mission is to provide venues—online and in the actual world—where members can share technological and business knowledge and provide the printing community with the resources to not only improve performance but also become innovative providers of print solutions. The group does this via several different initiatives:

FESPA’s Web site also has a wide range of resources, including articles, publications, blogs, and even videos, via its FESPA-TV.

The organization’s lineage goes back to 1961 and a convention in Copenhagen, where it was decided to form an independent Federation of European Screen Printing Associations (FESPA) in an effort to foster interaction and cooperation among European screen printers, which delegates to that Copenhagen convention felt had been sorely lacking up to that point. FESPA was officially born in Hamburg in September 1962, and held its first event in Paris a year later. The goal from the outset, says FESPA managing director Frazer Chesterman, “is to build relationships with the print community.”

A non-profit association, FESPA takes full advantage of its reinvestment model. That is, they strategically invest surplus revenues in educational projects that foster learning and knowledge-sharing for both members and the wider printing community, whether it’s building a printing college or some other institution, or developing new events. Last March, FESPA held a Global Summit in Miami, FL, with more than 100 innovative printing entrepreneurs from around the world to share their ideas, detail their challenges, and propose solutions. The results of the two-days’ worth of panel discussions, breakout groups, and brainstorming sessions were compiled into an 11-page “Global Summit Blue Print.” “The development and distribution of this FESPA Blue Print is the first FESPA reinvestment project to directly benefit North American printers,” says Marcus Timson, FESPA sales and marketing director. “We hope it’s the first of many positive initiatives as we develop FESPA’s event portfolio for the Americas.”

FESPA’s leadership sees this as a propitious time to launch a major event in North America. “2011 is looking to be a year of growth in developed markets,” says Timson. 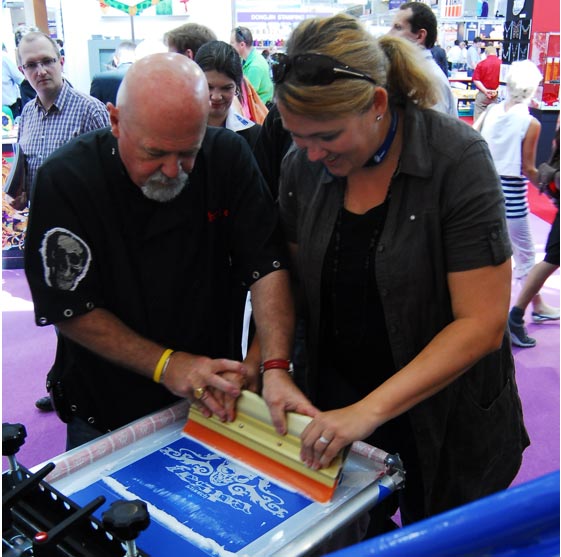 Indeed, business conditions research that FESPA conducts in conjunction with InfoTrends is “pointing to optimism and investment,” says Chesterman.

If there is a word that best sums up FESPA’s approach to its constituent members, it’s “collaboration,” or helping printers help each other by providing forums that allow shops to share innovative solutions, be they technology-, marketing-, or business-related. “That was the attraction of Graphics of the Americas, it’s a commercial print audience” says Chesterman. “There are a number of commercial printers who see wide-format as an opportunity.” Adding to this spirit of collaboration and cross-pollination, FESPA Americas 2011 and Graphics of the Americas are colocated with a third show, Imprinted Sportswear Shows’ (ISS) The Solutions Event, highlighting textile printing and other decorated apparel.

Show organizers are going out of their way to ensure that FESPA Americas is not your typical, run-of-the-mill trade show. “The reason people attend anything is content,” says Chesterman, “and we’re influencing movers and shakers with content not available in the U.S.”

“We’re not bringing a traditional trade show,” adds Timson. “It’s an event with lots of rich content positioned alongside a traditional print show. It’s the only show focusing on wide-format on the East Coast for 18 months.”

One of the high points of the show will be the “Screen Masters Program,” which will include workshops that focus on signs and graphics, fine art, textiles, and will feature an appearance by screen printing legend Michel Caza, as well as some other “weird, wacky creative printers,” says Chesterman.

Upcoming articles in this series will take a closer look at specific features of FESPA Americas 2011, and WhatTheyThink will be reporting live from the show.