An Examination of Business and Workflow Models for U.S. Newspapers

The newspaper industry is being redefined by changes of historic proportions.

The newspaper industry is being redefined by changes of historic proportions. This redefinition has resulted in a disruptive shift within the core audience of newspapers. Thus, many pundits of the industry have commented that the traditional business model is "broken." The reason for this declarative is primarily due to the reduction in circulation and the transference of audience attention to non-print media. Subsequently, the printed newspaper is no longer the primary "news" information source for most people.

The primary goal of this month's research study, An Examination of Business and Workflow Models for U.S. Newspapers (PICRM-2009-02), by Twyla J. Cummings, Ph.D., Howard Vogl, M.S., Claudia Cristina Alvarez Casanova, and Javier Rodriguez Borlado, was to answer the following research questions in response to the situations described above:

1. To acquire a unified understanding of the traditional and emerging newspaper publishing business models for large, medium, and small newspapers, and to assess what newspapers are doing to change their business strategies.

2. To understand the prepress and production workflows for newspapers, to evaluate how they compliment and interfere with each other, and to determine if there are differences based on size of the newspaper.

3. To review audience analysis for the various print and on-line newspaper products.

To achieve these objectives, an extensive survey of five different newspaper organizations was conducted. In addition, the survey was supported by in-depth secondary research.

Traditional Newspaper Model
The traditional newspaper business model has enjoyed extraordinary success over the last century. This business model sold space to advertisers who were willing to pay for access to readers, and newspapers to readers who were willing to subscribe to the printed newspaper. This represented the perfect symbiotic relationship between advertiser and reader. Advertisers had access to a known, stable audience, readers had access to inexpensive editorial content, and newspapers were the gatekeepers.

However, decreases in newspaper circulation have resulted in a sharp drop in advertising and circulation revenue. Consequently, the traditional business model is no longer viable. Evidence of this downward trend can be seen by reviewing the drop in circulation figures of the printed newspaper over a 60+ year span as shown in Figure 1. Additionally, when circulation is expressed as a percentage of the U.S. population, the decline is even more precipitous (see Figure 2). From the early 1990s to 2006, the percentage of newspapers purchased in relation to the U.S. population decreased from twenty-five to eighteen percent. The years 2005 and 2006 show an even steeper rate of decline.

Figure 2. Total newspaper circulation as a percentage of the U.S. population, 1940 to 2006
(Newspaper Association of America, 2008)
click to view image full size

Electronic Media
The steep decline in newspaper circulation coincides with the ascent of the Internet. Newspapers have fought back by establishing their own websites, which have gained audiences. However, it is becoming increasingly apparent that the online revenue gained will not make up for the losses in print revenue.

In addition to the loss of revenue, electronic media has lowered the entry barrier for creating publications. It is no longer necessary to have a multimillion-dollar printing press to publish news content. All one needs is a computer and an Internet connection. This has diminished editorial exclusivity for newspapers, and has challenged their influence in the community.

Technology
Technology challenges are generally directly related to business challenges because the business model defines the strategy that the company will follow. Once one path has been chosen, different technical problems will appear. On the one hand, the newspaper company has to offer more products—not only the print edition, but also a web edition that provides additional material such as podcasts or videos. The local editions also require more news content. Due to current users’ expectations, advertising companies are demanding more quality and more color in the print edition. Often, this extra work is done by existing staff, which leads to the need for automation, new technology, and the incorporation of workflow standards.

Future Outlook and Directions
Most industry reports suggest that the future outlook for the printed newspaper is bleak. This is largely due to the impact of the Internet and other electronic media. Additionally, as the age demographic changes and core readership declines, there are a growing number of young people who are not interested in news from newspapers, or who prefer to get their news elsewhere. Given this outlook, it is imperative for newspaper publishers to diversify their business model and incorporate a strategy that is consistent with the way people live and how technology works today.

No research study is without limitations. Some limitations were identified prior to the start of research, while others were encountered during the data collection phase. The major limitations cited were:

1. Limited number of research participants. The original goal was to collect data from nine newspapers (3 large, 3 medium, 3 small). Data could only be retrieved from five newspapers (1 large, 2 medium and 2 small). The length of the questionnaire may have been a factor.

New and Emerging Models
Today, newspaper companies are viewed as news media companies. This is indicative of the fact that they no longer focus exclusively on the printed newspaper. The current business model is diverse in nature. The purpose is to reach the widest audience. Newspapers no longer think only of subscribers, but of audiences. They are working to produce products for a cross-section or wide variety of audiences in order to interest potential subscribers in what they have to offer.

The revenue streams from this business model are circulation, advertising, inserting, and providing other products and services as follows:

New/Future Business Strategies
The participants in this research seem to support a diversification strategy to maximize profitability from print and on-line products. This response was consistent across every paper size.

From the interviews with these companies, it appears that the following changes to the physical paper are most common for the medium and small newspapers:

Core Audience
Primary research indicated that the core audience of most newspapers ranged between 30-49 years old. An examination of the average reader age based on an analysis of 131 newspapers in the Audience-Fax database provides a different picture. Based on this data, the majority of readers are in the 50-64 age group. Table 1 shows the average age of readers for publications in the Audience-Fax database (2008).

However, an examination of individual publications in the database indicates a wide range in readership age based on publication. For example, the Sun-Sentinel in West Palm Beach has the highest 55+ readership (68.6%), while the Philadelphia Daily News has the lowest 55+ readership at 27.4% (Audience-Fax database, 2008). Therefore, it is possible that the newspapers surveyed do have core audiences in the 30-49 age group.

All organizations (with the exception of the large newspaper) indicated that their core audience was diminishing. In some organizations, decreases in core audience population, or population in general, were blamed for the reduction in audience. While regional differences for the reduction in core audience may hold true in specific markets, the long-term overall decline in newspaper circulation indicated that this was the exception rather than the rule.

Business Strategy
Newspaper publishers realize that they can't be 'married to the newspaper' if they are going to remain viable businesses. Successful companies are beginning to look very different from the traditional model discussed earlier. An appropriate and successful model for newspapers involves a diverse mix of product offerings. The Democrat and Chronicle has taken this approach, which is illustrated in Figure 4. 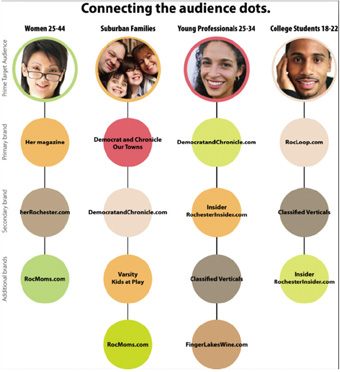 Audience
Newspapers have accepted that their core audiences are composed of middle-aged and older readers. They have also accepted that younger readers will read the printed newspaper far less. To deal with diminishing readership, newspapers have developed several approaches. These approaches fall into one or more of three broad categories. The first approach is to increase online readership to compensate for the loss of print readership. The second is to increase relevance in the local media market, and the third is to maximize the present value of the core audience. Typically, these broad approaches are combined into a total strategy for the marketplace.

Workflow Trends
Newspapers are doing more types of commercial jobs in the prepress department, using the same people and workflow through automation in the process without the use of standards. Most of the images used come from in-house photographers, while very few come from archives. The medium size newspapers produce a wider variety of jobs and are using more automation. Additionally, PDF is gaining acceptance as a format for interchange files. Another trend that was observed among the research respondents was the relationship of newspaper size and automation; the larger the newspaper, the greater the level of automation in the production process.

2008-2009 Research Monographs:
To read about this research in detail, download the monograph from: http://print.rit.edu/pubs/picrm200902.pdf