As the new year began, 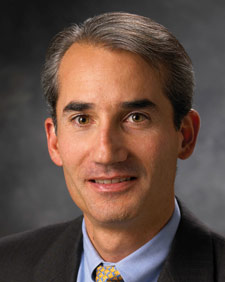 As the new year began, Quad/Graphics announced a strategic move to reduce its production capacity in response to the difficult economy. Specifically, the company announced that it will shut down the equivalent of one plant’s worth of capacity immediately, eliminating approximately 550 jobs in five states, or approximately 5.6% of its domestic work force. Privately-held Quad/Graphics is the sixth largest printer in the U.S., with estimated annual revenues of $2.2 billion, according to the most recent Printing Impressions Top 400.

As a family-owned, and very family-oriented, business, Quad/Graphics likely faced a difficult decision in making this move.  WhatTheyThink spoke with family member and CEO Joel Quadracci to learn more about the company’s “capacity reset,” and to garner his advice for others in the industry during what is shaping up to be a tough 2009.

WhatTheyThink readers should regularly monitor the Economics & Research Center for updates on the economy and additional advice for weathering this storm.

WTT:  Joel, thanks so much for taking time to speak with us.  This reduction must have been a difficult decision. You have not historically had a lot of layoffs at Quad/Graphics, have you?

JQ:  This is not the first time.  We had to eliminate about 100 jobs in August, mostly administrative positions, and that was tough as well.  We are often able to handle a drop-off in business volume through attrition because our plants have been in low-unemployment areas, and there is a fair amount of turnover, especially in labor-intensive, entry-level jobs.  Historically, we have to hire about 50 people per week to stay even.  But in this case, the entire economy has taken its toll, and there was a capacity reset that had to happen.

WTT:  What does this mean for Quad/Graphics? Since you invest a great deal of energy in maintaining your platform, it is not like you can just remove aged equipment!

JQ:  It means we are shutting down presses and finishing equipment throughout the network because it doesn’t make sense to shut down an individual plant. Our geographic platform works well in terms of locations for our customers.  However, the equipment we're shutting down is the equivalent of closing a large plant.  These presses will be shut down, and what happens to them, who knows? Maybe some will be sold, perhaps they will be used in the future, perhaps they will be repurposed here or abroad. It depends on what happens with demand.  As a private company, we have the discretion to address market shifts as they happen. And you are right, they are good presses. We don’t have some old plant that should be shut down or old iron that we keep alive.  When you are running over capacity, it is hard to manage labor, and there is too much equipment for too little work. A lot of people that will be affected have been here a long time, but I just don’t see the world turning around quickly.

WTT:  In your release, you stated that the world needs to go through a capacity reset, not just the printing industry.  Can you elaborate on that statement?

JQ:  The industry has been over-capacitized for a long time, and we are seeing some of the results of that in terms of a lot of consolidation.  There are three big printers left in long-run magazines, catalogs and retail where we compete, as well Brown printing. But with this consolidation, capacity hasn’t been taken out to the appropriate level to match what has gone on with the demand for print.  People also should remember that the capacity issues we are seeing now in the printing industry are no different than any other industry. The whole world has too much capacity for the demand that is out there.  I know a comeback will happen, but I don’t see it being a dramatic comeback that will get us quickly back to where we were.

WTT:  What advice do you have for other printing concerns who, though perhaps not as large as Quad/Graphics, are facing similar concerns?

JQ:  Hope is not an operating strategy. Often when there is a downturn, you will hear people say, “We are well-positioned for the turnaround.”  What if the turnaround doesn’t happen, or doesn’t happen soon enough?  You probably have not made the tough decisions you need to make if it doesn’t. You have to take an objective look at your operation, make the decision with your head and implement with your heart.  Be fair to people and treat them with respect, but you are not doing your job if you are not managing for the long-term health of the overall company.

Keep in mind that we are a very healthy company from a balance sheet perspective. Quite honestly, we have the highest operating margin in the industry. As we pull CAPEX down, that means we are able to pay off in excess of $100 million in debt, meaning an even stronger balance sheet.  The success of any company is made up of the success of many years at a time.  As a private company, you can afford to have a weak year or two as long as you make the right decisions.  But people need to be aware that this is not a run-of-the-mill recession, and they must have a realistic view of what has to happen to survive it.

WTT:  Just to clarify, does this mean you are anticipating no CAPEX in 2009?

JQ:  No.  Our platform is in great shape, but we are still spending on automation technology and the future of print, especially with variable print.  But we have been able to dial back regular CAPEX and apply those funds to debt reduction.

WTT:  What about suppliers to the industry?

JQ:  They have already been having a tough time.  If you talk to equipment suppliers worldwide, there hasn’t been a lot of equipment purchased. The paper industry has been struggling for a long time as well, trying to hold its own.  But when an industry is off 15% to 20% in volume, it is really tough on all the suppliers.  That is the challenge with this overall economy.  The recession is deep, and the thing feeds on itself. The talking heads don’t help, either.  We talk ourselves into a lot of things in this country.

WTT:  Speaking of talking, we talk a lot about the effect of alternative media on print.  It seems to me we don’t talk enough about the new role of print in a changing media mix.  Can you comment on that?

JQ:  Print still has a huge role to play, but the industry has been slow to adapt to its change in role.  Print will become more variable and much more specific to the recipient with one-to-one marketing. Print works well in conjunction with the Internet, especially if you view your marketing strategy as more about using the data you have about the people you are trying to get to and using all media together as one offering.  If you think either/or, you will struggle.  Print will continue to drive commerce on the Internet.

WTT:  I am sure part of what you have seen in your business is related to the effect of this “new role of print in the media mix,” with marketers leveraging the web to produce smaller catalogs, and magazine ad pages down.

JQ:  Advertising is off everywhere, not just in magazines and catalogs.  Look at prime time TV and radio.  Where there used to be brand advertising at 7:30/8:00 at night, now you see the type of direct response advertising that was usually only run during daytime or late night broadcasts.  Drive through any metro area—even billboard space isn't selling. And these ads don’t pay the media outlets as much as brand advertising does.  This economic downturn will force people to be smarter about how they use print, especially with cost of paper and postage going up. The consumer will come back, but at the same time, it is the marketers who are more sophisticated who will do well coming out the back end of this recession. Print needs to be looked at differently.  It needs to connect with alternative media in a holistic approach to marketing.

JQ:  The question is not whether you use a digital press versus a long-run offset press. It is more about how much variable data you need to use to accomplish the objectives.  Personalization or variable print happens in all parts of our process, whether it is using Indigo, Xeikon, high definition inkjet on press, or inkjet in the finishing process.  It is less about which technology you use. Today it is an Indigo; tomorrow, who knows?  The market is moving quickly.  What is important is how you use it to get the right economic impact. We could easily have put in digital presses long ago. The issue was whether there was a marketplace in long-run print that could be enhanced with those presses.  For us, it is not about a full four-color page that is 100% different from copy to copy.  It is about varying an area of content within a full-color static page. At the end of the day, you may not need the full page of creative to be different, only a small block or two within the page.

WTT:  What about the next generation of inkjet presses coming down the pike?

JQ:  It’s coming quickly; spot four-color inkjetting in swatches instead of full pages is already starting to happen.  But we won’t be using it for everything.  Again, it is about using the correct process for the correct impact.  It is not an either/or, it is about using the right technology in the right place to accomplish business objectives in the most effective—and cost-effective—manner.