Taking the Left Lane on the Road to Color 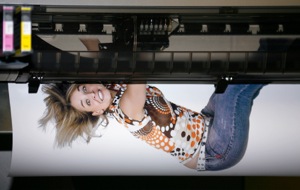 The buzz you're hearing is the sound of thousands of nozzles on hundreds of high-speed color inkjet print heads firing away, spraying miniscule droplets of ink onto paper moving at often outrageous speeds. Okay, so there aren't really hundreds of high-speed color heads out there, and you can't actually hear the nozzles firing, but you get the idea. High speed ink jet printing is looming large on the horizon, with production-class systems available from three of the five major print engine vendors, each taking a different approach to putting ink on a speeding web of paper.

The common ground is color, speed and lower operating cost, all of which appeals to companies with large print volumes and narrow print windows, primarily those that churn out statements for banks, credit cards, utilities and financial services firms. Each of these is looking hard at ink jet technology as they look to make the transition from black-and-white to color and some level of trans-promo printing.

"Color makes the details of statements clearer and makes visual props, like charts and graphs, much easier to read," notes Mathis.

One of the latest to start down this path is Personix, a business unit of Fiserv. Personix is a large service bureau that handles transactional documents for companies in financial services, retail, telecommunication and health care. The company just purchased a pair of InfoPrint 5000 ink jet printers from InfoPrint Solutions to produce full color statements and transition away from black-and-white. The two machines are in a duplex configuration that enables full-color printing on both sides of a page at about 210 feet per minute. That works out to 916 two-up duplex impressions per minute.

I talked with George Promis, Vice President, Color Solutions and Technology Alliances for InfoPrint Solutions Company, just before the deal was announced. "They plan to use them to improve their customer-facing documents, adding marketing messages to transactional documents and use those documents as communication vehicles they can print at similar speeds as they have in black-and-white. They already had color printers but didn't have the speed they needed, so they're moving up the food chain to communicate using color in more of their transactional customers," explained Promis.

According to Don Mathis, Executive Sponsor of Printing Solutions at Personix, the company believed they had to being offering color to remain a leadership role in the market, but at the same time sought the flexibility to use the same device for black-only printing.

"We've been talking about color for transactional print for about two years," relates Mathis. "Most of that has been driven by the needs and desires of our customers. We believe in being a single point provider, and our business model is driven off of value-added services. The InfoPrint 5000 is another evolutionary step and we wanted to be there to service our customers moving forward."

"There are various industry segments crying out for color but they aren’t willing to pay three or four times the price of monochrome printing," Mathis continues. "Being able to deliver full color at a good price point was very important. Speed is also a big issue. We send out well over 1 billion transactional documents a year, so print speed is a critical factor in what we buy."

Personix see the greatest opportunities with the IP5000 in financial services and retail.

Statements from brokerages, for mutual funds, investment portfolios, and more can all benefit from full color. These have long been done in black-and-white, but several Personix customers are seeing real appeal to using color.

"Color makes the details of statements clearer and makes visual props, like charts and graphs, much easier to read," notes Mathis. He thinks customers will ultimately experience fewer calls to customer service centers, simply because the statements will be easier to understand. "Once they see what can be done, tt's really not a tough sale," says Mathis, who expects the first applications to "go live" in the next 60 days.

Next up is retail, which is where Mathis sees trans-promo statements really taking off. Instead of generic collateral enclosed with statements, Personix will print the promotions on the statements, saving the cost of printing collateral, but more importantly, being able to target offers by looking at customers' purchase habits. He expects the first retail applications to roll out later this year.

Coming from electrophotographic printing, Personix wanted bring in color while retaining the rich blacks they were accustomed to. After looking at the other technology available they felt the InfoPrint 5000 had a significant edge. Mathis expects to be able to get all the colors they need out of the new system, and are working with customers to make sure the colors they print will be acceptable in terms of logos and branding, the perennial challenge in many types of printing. Another positive stroke was the IP5000's ability to use both ink jet and EP papers.

"We've had very good results on both EP and ink jet papers," says Mathis. "we need to be able to run on EP papers because even though we can print in full color, we know we'll still have to use certain pre-printed forms. And all the papers we've tested have worked fine in post-processing. We'll probably wind up with three or 4 stocks for inventory management purposes."

George Promis says IPS will be working with Personix to help ensure the documents coming off the InfoPrint 5000 will be effective. There's a separate engagement with Personix that draws on the depth of expertise IPS has, both internally and through IBM, in data mining, IT, and printing. This is a critical step, because the only way trans-promo can be truly successful is if the data mining and associated marketing strategies are fully developed and integrated into the customer communications program.

The timing is right for data mining and high-speed color and trans-promo to begin moving forward," notes Promis. "Costs are coming down even as postage costs are going up, so businesses are driven to get better responses and also better ways to communicate with customers. Companies are looking for a powerful way to touch their customers and transactional documents that customers are going to see every month are an excellent way to do that."

One of the most positive elements of ink jet right now is that three of the five major players in digital printing have high-speed ink jet in the market. Kodak has its Versamark family, with new members showing up at drupa. Océ has its new JetStream models and IPS has the InfoPrint 5000. Xerox may be showing a possible entry as a tech demo at drupa, and Tim Taylor, European Marketing Manager of Screen (which manufactures the InfoPrint device) says the company is committed to further development of the technology. When companies like these stake out territory in the inkjet space you know they aren't just posturing, and each new device reaching the market is validation of the new technology. This is going to be an interesting year.