An established but little known fact is that in the wake of its acquisition of Heidelberg Web Systems in 2004,

An established but little known fact is that in the wake of its acquisition of Heidelberg Web Systems in 2004, Goss International became one of the world's largest providers of high-end print finishing solutions, including commercial saddlestitchers, adhesive binders and auxiliary equipment, as well as a systems integrator for press and postpress equipment. 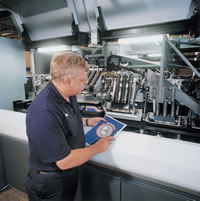 In short, Goss has a lot to crow about – much of it on display in booth #3700 at Print 05. A list of Goss "firsts" includes the web offset newspaper press itself, the four-color tower, gapless blankets and automatic plate changing technology. It also includes servo-driven selective binding technology.

In the commercial web sector, where success demands an ability to deliver complex, high-quality products like publications, catalogs, directories, newspaper inserts and commercial products at the fastest speeds and the lowest costs, it must be noted that Goss postpress saddlestitchers and adhesive binders also finish many of these products. Goss emphasizes the value of integrated solutions by offering its customers so-called “turnkey” packages including press, postpress and paper handling solutions.

Two of the most powerful solutions in the Goss postpress portfolio are its Universalbinder systems for perfect binding at speeds to 20,000 cycles per hour, depending on application; and its Pacesetter saddlestitchers, delivering up to 20,000 books per hour. In non-selective binding applications, Goss claims, the binders run at their full rated speeds, in selective binding situations, slightly below, but the gap is narrowing – well, very fast indeed.

What Is Selective Binding?

Briefly, “selective binding,” a term used more or less interchangeably with “versioning,” describes the assembly of customized publications for specific subscribers. The customized product will have a selected mix of editorial and advertising content targeted to appeal to a subscriber’s interest or to the interests of a defined group of subscribers. In addition, the publication often will contain personalized messages printed onto promotions bearing salutations and details of dealers or retailers in the vicinity. It often will be addressed, postcode sorted and arranged in postal delivery route sequence before it leaves the bindery, saving publishers the cost of first-class mailings. In short, explains Claus Koop, Goss International’s Product Manager for Bindery Equipment,

“The trend toward selective binding is being driven by advertising, the move toward short run lengths, versioning, and the need to produce high volumes quickly at high quality.”

Database-driven selective binding works to build reader loyalty by enabling publishers to deliver advertising and editorial content that reflects the regional or demographic interests of their readerships. The level of customization can broad (as with a particular demographic) or quite specific, i.e., personalized to individuals. Selective binding also benefits publishers in attracting new advertisers that want to target particular customers or customer types. In so doing, it adds value to the printing process as an array of variable products replaces a single “generic” edition. In the U.S., where an overwhelming percentage of magazine sales are subscription-based, it has become standard operating procedure, with the biggest printers like Quad Graphics, RR Donnelley and Quebecor all offering selective binding of their perfect-bound magazines. “Personalization is the value-add,” says Koop, noting, “ Selective binding also may entail selective pricing.”

So much for the concept – and to tell the truth, selective binding is hardly a new one. When it comes to execution, however, effective selective binding demands an easy-to-use solution that can operate at the highest possible speeds and yield the best possible quality, no matter how complex the binding process involved. And the range of selective binding techniques is daunting: variable covers, page counts, editorial content, advertising and inserts, and more. “There’s a lot of value-added going on in the bindery,” Koop observes. Factoring in the industrywide move to shorter runs, minimal setup time, fast changeover and minimal waste, however, and it’s clear that the offset web print finishing bar is getting higher all the time.

The Proof Is in the Throughput

Print finishing has risen to greater prominence in the web offset world in recent years, just as postpress has done in the commercial sheetfed world. And it has done so for essentially the same reason: net throughput. 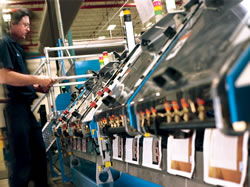 “It’s the throughput that matters,” says Koop, “making the average job run faster. And print finishing speed is the key to net throughput.” Further, he says, “Goss is out to demonstrate the value of web offset as a ‘push-style’ advertising medium, where the key to consistently high net throughput” lies in a flexible, efficiently configured, integrated bindery. While the potential for ink-on-paper and web offset begins with ad spending and a vision for driving more of it away from alternative media and toward print, the ultimate responsibility for ensuring the highest net throughput rests with the print finishing arena.

To facilitate selective binding on either the Goss Universalbinder or the Pacesetter 1100 saddlestitcher, individual hoppers are switched in and out of the cycle, controlled by data from the publication subscription database. The Pacesetter 1100 saddlestitcher, for example, uses advanced servo technology to drive the hoppers and card feeders that deliver individual printed elements for a saddlestitched book. By switching in and out of the collation process, personalized content can be assembled that reflects the specific interests of individual readers. Servo drives also permit each hopper to be made ready or maintained individually, even while other hoppers are operating. Hoppers and card feeders can be relocated on the collation chain for fast job changeover. To streamline set-up, located at every second hopper are touchscreens from which settings can be adjusted on-the-fly.

Selective binding applications grow even more complex as inkjetting is added on the selective binding line. Enter Omniflex, the home-grown, JDF-capable controller from Goss that interprets data from a publication subscription database and uses it to control all signature hoppers, card inserters and inkjet printer heads to selectively bind elements into the finished book. This control extends throughout the entire production process, ensuring entry into the correct mailstream. Goss reports that the overwhelming majority of its Goss Pacesetter and a significant portion of its Goss Universalbinder installations are equipped with selective binding capability via the Omniflex controller.

The fact that most bindery makeready is eaten up in paper handling is reflected in Goss’ attention to commercial auxiliary equipment like the BS60 Stacker, hopper loaders and a mark-free, single gripper conveyor that rises from the binder itself into flexible configurations that recall the reptilian menace of “Alien” fame. Notes Koop, the n ew venture with Ferag is designed to reduce labor-intensive handling and make print finishing work less stressful for bindery employees.

Juxtaposed with the demand for a hands-off, lights-out solution that will give customers exactly what they need is the complexity publishers are being asked to add on the finishing end. Says Goss International CEO Bob Brown, “Making print more attractive to advertisers will require magazines to become more ‘alive’, and that (means) more gimmicks, more products to be inserted into the magazines and the final printed product.” This is potentially problematic because a s web presses get faster, the specter of a bindery bottleneck hovers over the desire to provide the personalization and added value advertisers and consumers crave. According to Barry Meinerth of Time, Inc.: “We want all that variability and higher speeds.”