VDP and the Young Designer 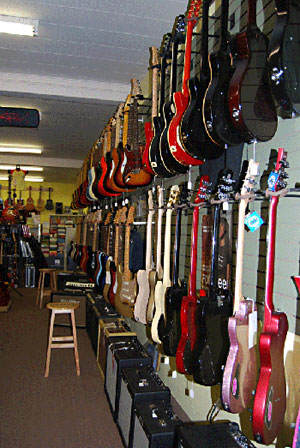 January 31, 2008 -- Many of my previous articles on OnDemandJournal.com and WhatTheyThink.com concentrated on the difficulty of recruiting students for the printing industry. Ah, those were the days. Before we at Dunwoody College of Technology experienced so much demand for open seats that we began to turn away interested students. Before we had to split our classes into two sections, and teach five days a week instead of four. Before each section featured twenty students instead of ten or twelve. Before my salary went from five figures to six. (OK, so that last bit never happened. Sigh.).

There are, as always, a number of reasons, as opposed to any one, that caused this increase in enrollment. None of which are the subject of this piece. However, this dramatically increased enrollment did cause a certain expansiveness in the mood of management, allowing us to slip a new course proposal past everyone, one which required a collaboration between my program, Graphics & Printing Technologies, and the Information Technologies program, "Design for Variable Data Print."

The idea was to combine my own experience with the Adobe Creative Suite applications, RIPs and color output devices with database administration skills I do not possess (although I am improved in that respect now the class is completed). So, I hooked up with fellow instructor Bob Nell, an old school, ex-Cray and Control Data programmer teaching his way toward retirement, yet still pathologically interested in anything to do with computers, programming and data in general.

My interest in putting this program together was to satisfy two questions regarding Variable Data: Will young designers be interested, and even capable, of integrating geeky, database work into their creative, arty side, and, Could we incorporate a real world, live project to see if we could be successful at it?

I make no claim at being on the forefront of post-secondary Variable Data education. That distinction probably belongs to Dr. John Leininger of Clemson, who put together a traveling road show on Variable Data Printing four years ago and who got me excited about the whole concept. It took this long to sell my own management on supporting the program because it required putting two instructors in the front of a single classroom, a concept hated by our bean counters, whether or not it makes academic sense. However, when bean counters run academic programs you get bean grinders as graduates, so we went ahead and did it anyway.

Our first class had an enrollment of seven 2nd-year designers, none older than their early twenties. We purchased a single license of Print Shop Mail, and cast about for a real business upon which to inflict ourselves. That business turned out to be Brickhouse Music, a dual-location music store in western Wisconsin, who was willing to lend us their customer databases in exchange for a gratis variable data trial run. Brickhouse is a regular customer of Dunwoody’s Print Services Center, and on a personal note, I teach banjo one evening a week at Brickhouse Music in River Falls.

The first session featured a visit and chat with co-owner Jen Burleigh-Bentz (a Broadway performer when she’s not involved in managing the store). The design students were required to interview her in order to document a business need to which they would strive to provide a variable data print solution. 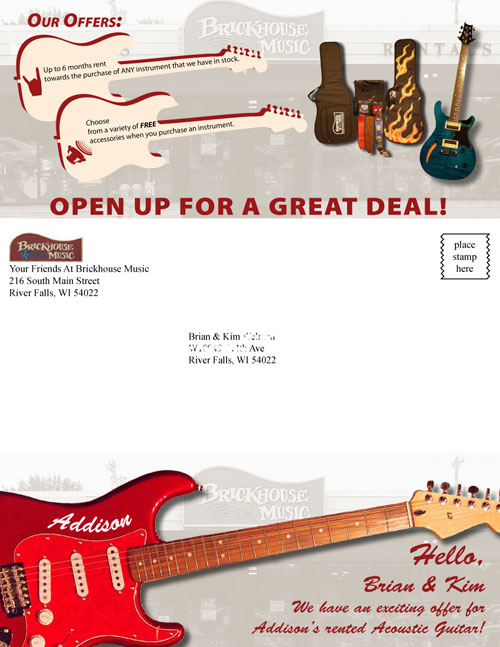 A problem to solve

Brickhouse Music’s two locations had very real cash flow issues created by their own success. Essentially, they had cornered the school markets in their region and had signed hundreds of instrument renters, each one walking about with an instrument worth hundreds of dollars. Every renter who could be persuaded to purchase their own, or a similar, instrument returned those hundreds of dollars back to the store. Now, a rental electric guitar might only be worth $150.00, but when you’re talking violins, cellos, French horns, baritones, flutes, etc. you’re talking real money.

Brickhouse Music’s Microsoft Excel “databases” were about what you would expect from data collected and organized by musicians, despite the best efforts of the ownership. Now, Brickhouse employees are all competent, and even, advanced, musicians; bright, hard working people whether they work behind the counter or as teachers. One thing they manifestly were not were database administrators. Entire addresses were crammed into single fields. Child names were mistakenly placed into parent fields. Instruments were misidentified, over-identified or left out entirely. As the project proceeded, new renters were added and others quit playing and turned in their instruments. Or switched instruments. Musicians!

Bob Nell taught everybody about database “munging” which is about as close to janitorial work as I.T. gets. It would be featured on the Dirty Jobs TV show if it involved any actual grime. Essentially, munging involves reorganizing, cleaning and doublechecking of disordered data. It is the sort of plodding, thankless task one would never associate with graphic designers. Our crew, however, set about it with a will, which was one of many pleasant surprises we encountered. And all the while they picked up useful information on flat and relational databases, record keys, and other non-arty, geeky subject matter.

We brought the whole crew on a field trip to Brickhouse Music’s River Falls store to see the place for themselves, photograph every instrument type being rented, and shoot products intended by the store as enticements. The designers grabbed interior and exterior shots of the store and posed themselves as musicians, pretending to play instruments, and being coached by yours truly on how a guitarist or horn player actually holds his axe.

Part 2 of this series will address how the designers divided up the work, what they produced and how successful they were. Anyone who can’t wait for the next installment and desires to meet these designers should come to Dunwoody College of Technology on Thursday, February 21st, at 2 pm in the afternoon. Our monthly 3rd Thursdays seminar will feature our VDP project. InternExpo ’08 begins immediately after, which is your chance to hire these people before someone else does. For details call Pete Rivard at 612-381-8210 or email me at [email protected].