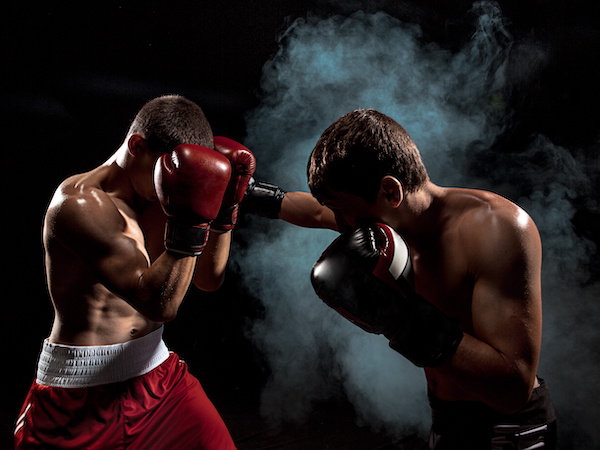 You’ve heard it. I’ve heard it. Print is Dead. If that is true, why did two private equity heavyweights, both of which are already invested in print and paper, get into a slugfest and bid up the share price of RR Donnelley(RRD)?

The deal is not done, so there still might be an opportunity for Atlas Holdings, the challenger, to rise up and get back into the ring. However, that appears unlikely at the time of this report. Atlas made a good show of it and had clear reasons to enter the fight. As the owner of LSC Communications, which itself was spun off of RRD in October 2016, Atlas’ bid held out the tantalizing possibility that two of the three formerly conjoined business units would be reunited under one ownership. Heads must have been spinning about the possibilities. Alas, Atlas got knocked out in the last round, beaten out by the tenacious, persistent parrying, blocking, and punching by Chatham Asset Management.

Chatham had been preparing for this fight for quite a while, bulking up on RRD’s common stock and gathering bench strength as the largest holder of RRD’s debt, both of which Chatham suggested would be converted to equity or subordinated in the restructured company, a huge advantage in the final rounds.

When the match between Atlas and Chatham seemed like it was all over, a mysterious contender slipped under the ropes via a “go shop” provision and jumped into the ring. Keeping its identity a secret, the mystery bidder punched above the fray with an offer that was ten percent higher than Chatham’s second offer which had been seemingly insufficient to dislodge Atlas. That did it. Chatham came back with a third bid and topped the mystery offer. As the final blow to settle the contest, Chatham also agreed to pay for any wounds it had inflicted on Atlas, offering to pay RRD’s $20 million termination fee due to Atlas for breaking up. RRD rang the bell and declared Chatham Asset Management the winner. 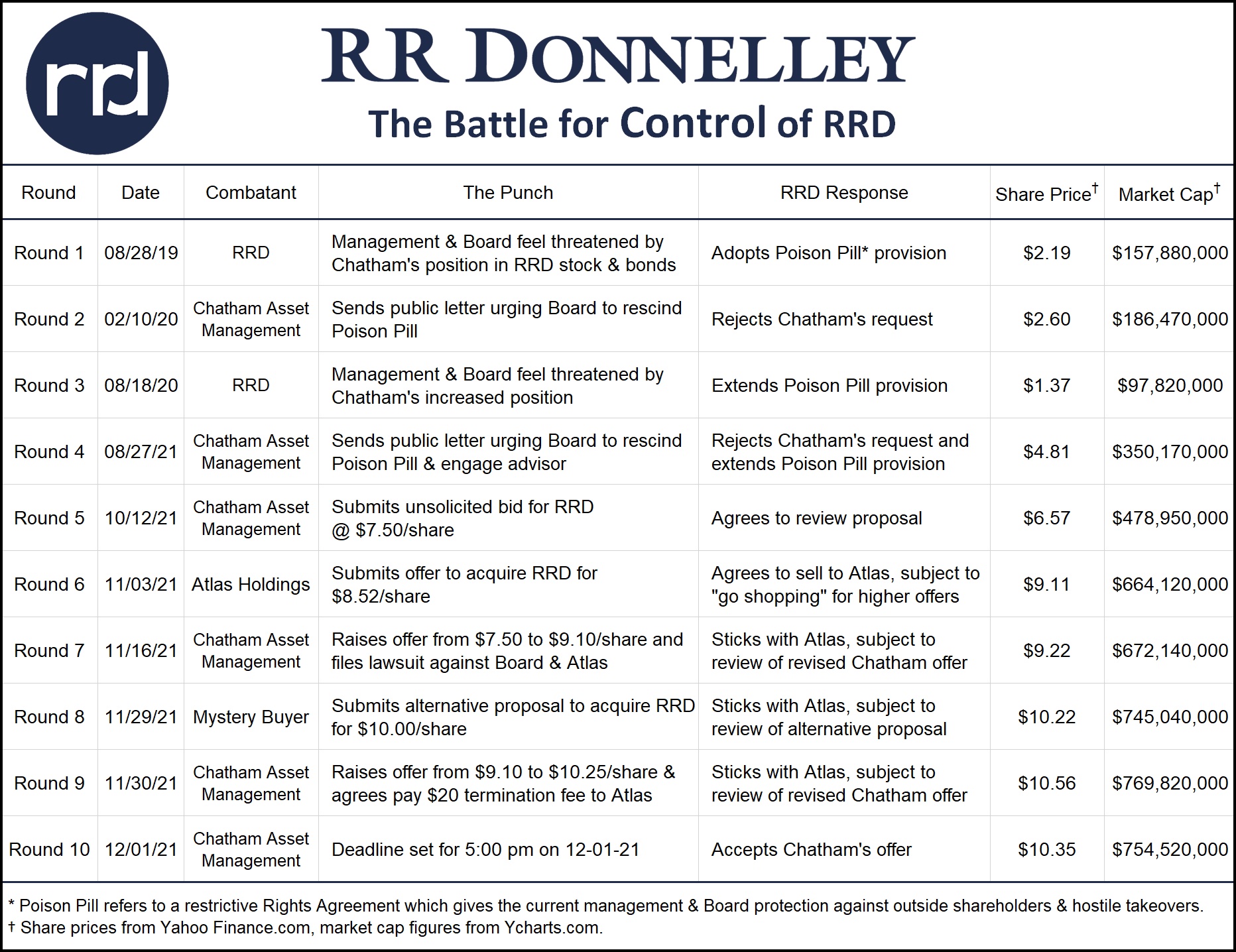 While the contenders slugged it out and went the full ten rounds in a battle for control of RRD, the value of stockholder’s equity shot up from a dismal low of less than $100 million at the trough of the market after the pandemic broke out, topping out at the conclusion to more than three quarters of a billion dollars. Total enterprise value, including equity and debt, was reported to have reached in excess of $2.1 billion.

Neither Chatham nor Atlas are strangers to the world of print and paper-based industries. They know what they are getting into. It’s true that these sophisticated financial players move in on their targets when company situations are advantageous to a buyer, such as Chatham did by building a position when RRD’s stock and debt values were depressed, or by acquiring companies in bankruptcy proceedings. Nonetheless, they must perceive significant value in the assets, or they would not be in the hunt for these companies.

Chatham Asset Management is a major player in the newspaper industry, including its investment in McClatchy, the publisher of over 30 newspapers. Chatham acquired the McClatchy assets in the 363 sale process in McClatchy’s bankruptcy proceeding. (See Buyers are On The Move and On Track, Newspaper Publishing – July 2020.)

Atlas Holdings will be known by many in the printing industry for its take-private acquisition of LSC Communications, the RRD spinoff that is the largest book manufacturer in the US, as well as a major US printer and distributor of magazines. Atlas also owns several paper manufacturing companies, including Finch Paper, which in turn acquired French Paper Company, Twin River Paper Company, Marcal Paper, and is currently in negotiations to acquire coated paper manufacturer Verso. Atlas also has investments in packaging with its portfolio company ASG AGI-Shorewood Group.

For those of us who have dedicated our careers to the printing and related industries, it’s nice to know that we are in the company of these Masters of the Universe* who see value in and have placed their bets on businesses that print.

CJK Group, the privately owned consolidator that has focused on book manufacturing and journal printing, jumped back into the market with the acquisition of Times Printing, a large web and sheetfed printing facility in Random Lake, Wisconsin. The acquired company was formerly part of the late Nicholas Karabots’ Kappa Media Group. The plant produces magazines, catalogs and commercial printing in a wide variety of finished sizes, with some short cut-off size capabilities.

ProAmpac, headquartered in Cincinnati, Ohio, acquired Irish Flexible Packaging and related company Fispak, both in Ireland. The acquired companies manufacture waxed paper and specialty wraps for meats, cheeses, and bread products. Currently backed by Pritzker Private Capital, ProAmpac has been rolling up the flexible packaging segment steadily since its formation in 2015 with the merger of Ampac and Prolamina. The company has branched out recently in products such as wraps and bags (see Bags, Pouches, Trays & Bowls – December 2020).

ProMach, a manufacturer of packaging machinery, acquired CL&D Graphics, a specialty printer and converter of roll-fed film, labels, shrink sleeves, pouches, lids, and preprinted thermoformed packaging. The acquisition would appear to be a new strategic direction for ProMach, providing the packaging materials in addition to the machinery.

TC Transcontinental, the largest printing company in Canada, continued its evolution into a packaging and retail display company, moving steadily away from its legacy position as a publisher and printer of newspapers and magazines, with the acquisition of H.S. Crocker (see Getting Flexible in Your Middle Years - April 2018). The acquired company has revenues of $50 million and operates two facilities, in Huntley, Illinois and Exton, Pennsylvania.

* “Masters of the Universe” from The Bonfire of the Vanities by Tom Wolfe, 1987, referring to highly successful financial business experts. 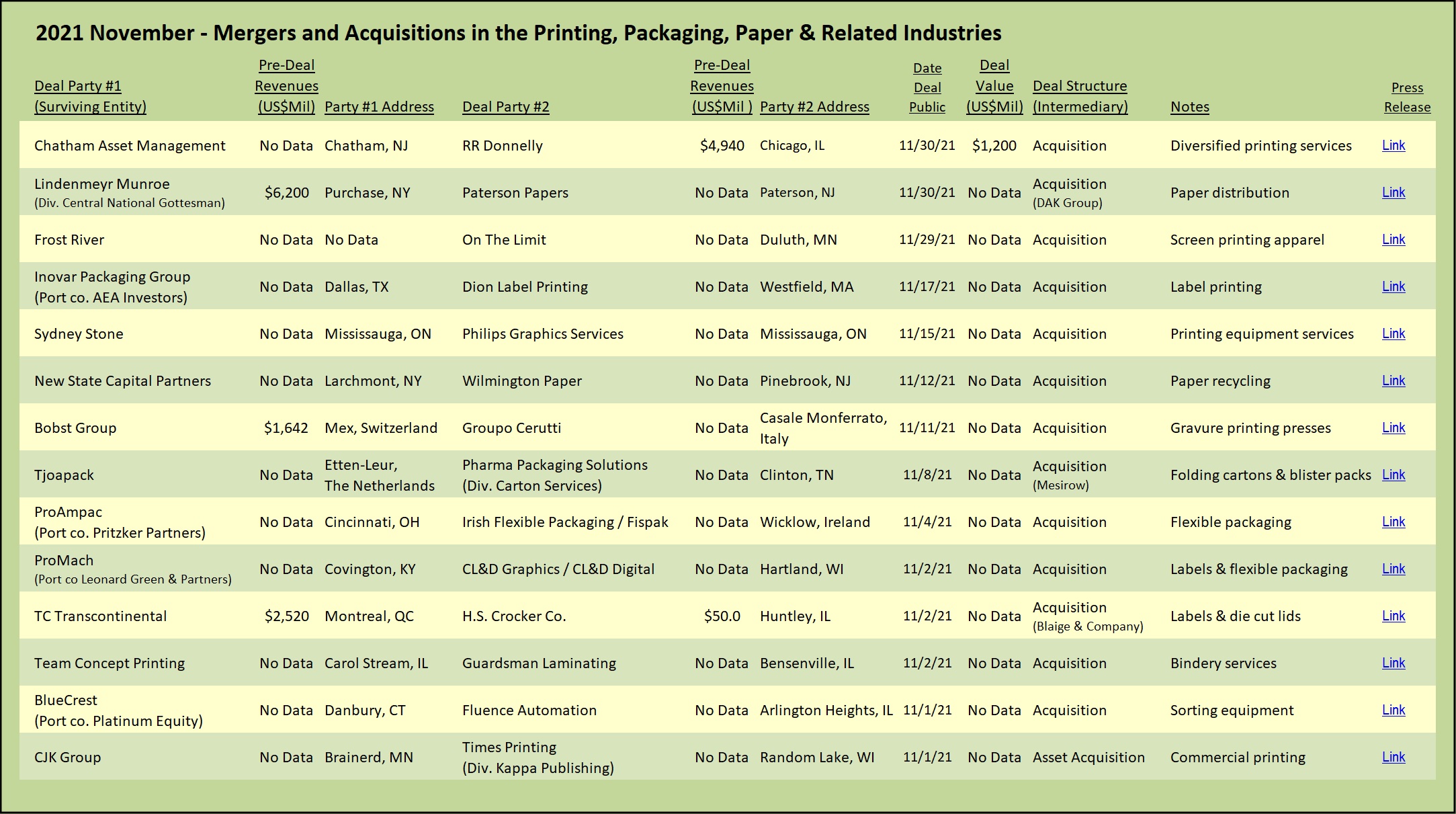