Indigo did some research to understand why some commercial print customers managed to come out ahead during the pandemic crisis—some even doubling their volume. This article, sponsored by HP and written by HP Indigo's “Workflow Chef” Gershon Alon, looks at the factors that made some print businesses more resilient than others.

The pandemic marked a unique moment in time where for the first time in modern-day history, the entire world uniformly shared the same experiences. Dramatic changes in people’s behavior during this time has had an impact on businesses all over the world and consequently, on the print industry as well. Evidence showed that some print service providers struggled while others flourished.

So, at Indigo we did an internal study in an attempt to understand why, while the majority of Indigo commercial printers have seen a decline in print volume, approximately 10% of our customers did very well—some even doubling their volume during these turbulent times.

We divided the customers into five groups, based on the changes in their print volume—i.e., decline or increase. As expected, we found that on average there was a decline in volume for our commercial print customers. However, we observed that the more successful printers, the ones who increased their volume, were found to possess a set of attributes that were common to many of them during this specific period of time (comparing Jan.–Dec. 2019 to Jan.–Dec. 2020).

Below I list some of the data and insights we discovered from our research. Some results were surprising and some not so surprising, but I believe our observations can be extended generally to print service providers who not only own Indigo presses but who own other brands of digital equipment as well.

Was Growth Momentum a Factor?

We asked ourselves, if a customer typically experienced growth in the past, was that a predictor of their growth during the pandemic? The answer was a surprising no. From what we could see, there was no correlation. We saw that some customers who were steadily growing in the past, stopped growing during the crisis. There were also those that did not have measurable growth in the past but did start growing during the pandemic. So, it didn’t seem that growth momentum was a factor.

Was Diversification an Indicator of Resilience?

We did find that customers who had a wider set of offerings and skills were more protected from the negative influences. Print service providers were more likely to grow when their basket of services included capabilities such as VDP, web-to-print, or jobs with special colors or that used high definition (HD) printing which translates to exceptional print quality. This is logical if you think about it. The chances of being hit dramatically was mitigated by the fact that they could offer a wider selection of solutions. 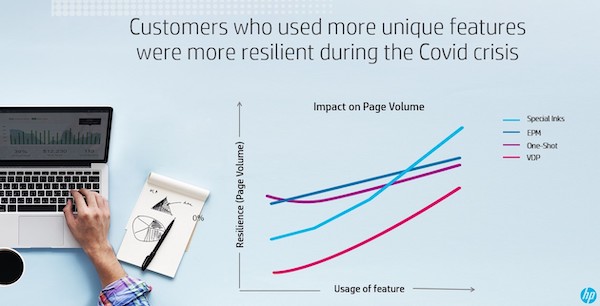 Did Installing the Latest Software or Hardware Make a Difference?

Those who maintained their equipment and were up to date on their software releases were more resilient and more capable of growing. This is not to imply that if you buy new equipment, you’ll automatically be successful—I am not saying that. But it is hard to avoid the fact that the people who were diligent about not falling behind were the ones that fared best. In my opinion, this is more a reflection of an attitude or state of mind and the willingness to take measured risks. Oftentimes, risk-averse people avoid installing new software versions because they feel it poses a threat or unknown impact to their current activity. As they say, “no risk, no gain.”

We also noticed that those who used remote and mobile access to monitor their production and color were more inclined to be in the 10% group of successful outliers. These are the people who are the relatively sophisticated users with their finger constantly on the pulse of their production. They are typically the first to jump on a latest software version and enjoy discovering the fringes of new technologies; the early adopters that are not afraid to push the technology envelope. 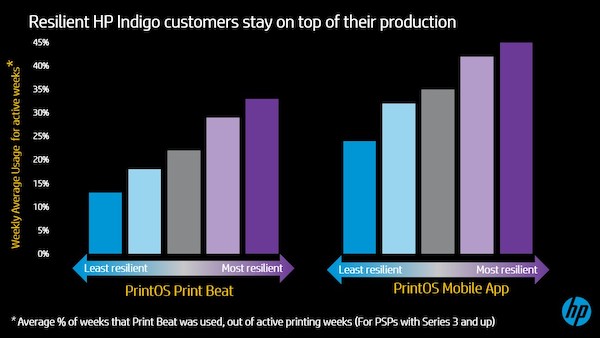 Not often does one get an opportunity to understand some of the dynamics of what breeds success, but recent events and the research we have done on our large customer base have shed some light on understanding the ways customers have managed to succeed, even in the most difficult of circumstances.

The Workflow Chef is a column led by Gershon Alon, Head of PrintOS at HP, and a workflow expert and industry speaker. Gershon has been at the forefront of print automation and workflow for over two decades. He’s had roles at Scitex, Creo, and Kodak and since joining HP Indigo in 2010, he has led its workflow and solutions team and managed the ongoing growth of HP PrintOS. Feedback or questions may be sent to [email protected]